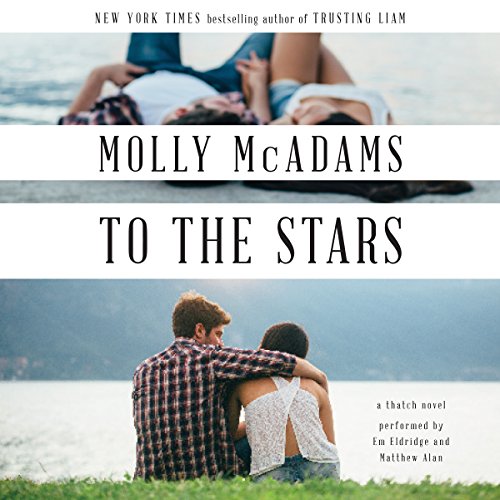 In the second book in New York Times and USA Today best-selling author Molly McAdams' Thatch series, Knox Alexander must convince his longtime love, Harlow Evans, that they're meant to be together.

He promised to wait for her. She told him he was wasting his time. Not waiting for him ended up being the biggest mistake of her life.

When they were younger, Knox Alexander swore to Harlow Evans that he would wait for her to turn 18 so they could be together. But that was three and a half years away, and Harlow couldn't ask him to give up all the fun and thrills of going away to college for her. As the years passed, Knox remained a constant in her life - whether she liked it or not - but when her 18th birthday came around, Harlow's heart belonged to someone else.

Every day for the last four years, Harlow has been haunted by that fateful choice. And though he may appear unaffected by what happened in their past, Knox has always tried to fill the void Harlow left. But when he comes stumbling back into her life and refuses to leave, will Harlow finally let him into her heart...?

What listeners say about To the Stars

Loved the story and the narrators were fantastic!

I have the biggest book hangover after reading To the Stars. I also have another book to add to my favorites list. Molly McAdams is one of my go to authors. She never disappoints me with her words. The emotions that this book evokes is overwhelming. It was the most intense, sad and upsetting ride I’ve taken with this author since Taking Chances. My heart broke and my gut ached from the pain that Harlow and Knox endured. I was completely invested in these characters and their story.

I listened to this book on Audible and let me tell you, Eldridge Em and Alan Matthew did an amazing job at bringing Low and Knox to life. Together and separate, I loved the narrators and applaud their performance. It could not have been easy to record this book. I was sobbing through most of it.

Once again I’ve been Molly’d. I say that when I’ve been emotionally stripped bare, heartbroken beyond what I think can be repaired, yet she was able to mend my broken heart and make it swell. Wonderful job telling a story of such a sensitive subject. I’m really excited now to read Deacon’s story and hope to get a little glimpse of the gang from Thatch again.

Not exactly realistic in regards to age issues

The fact that Lows parents place these requirements on Knox if he wants their approval (i.e. Knox being three years older than Low her parents imply she cannot marry till she finishes college) yet Low loses her virginity at 18 and marries a boy two years older than her when still in college and ends up quitting college to be a trophy wife - AND Lows parents LOVE Colin. And even after Knox saves Low - her parents still attempt to put demands and conditions upon Knox. Poor Knox can't ever catch a break with Lows parents EVER. And that just plain sucked in my opinion. And seriously no just turned 18 year olds would ever dis a friend who liked a 15 year old. They would have been a senior and freshman in high school. Its not unreasonable to believe that they could have had a relationship especially considering Low is allowed to hang out with her sister of the same age as Knox in the first place.

I really wanted to like this book, but I had a really hard time getting through it. Most of the book is Harlow in fear and being abused. The abuse scenes were long, and plentiful. I made myself finish it, but now that I have, I'm just glad it's over.

There are no words for the feelings I have running through me at this exact moment!! I feel joy,love (to the stars of course),sadness and I did feel anger! This book was beyond amazing!! I cried (a few times) and there were times when I wanted to just go through the book and kill Colin myself! The love between low and Knox you can feel it...it goes beyond on the stars!! Molly you outdid yourself with this one girl!! Loved every page!!! If your on the fence about this book don't be!! Buy it and read it,read every page...its soooo worth it ,it's not everyday you get to witness a love (to the stars) between two people like low and Knox!