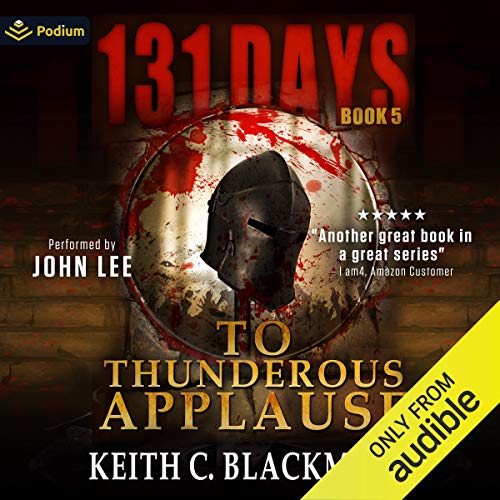 The fighting season continues, with Goll realizing he might have killed one opponent too many. Confronting the wrath of a dead gladiator’s stable, he discovers a much more vengeful force behind a slew of blood matches.

While the gladiators fight within the Pit, Brozz fights for his life in a much different arena.

Escaping an attempt on his life, Borchus finds refuge with an old friend.

Struggling to both recover from his wounds and find a purpose in a little village, Halm of Zhiberia discovers that giving up a pit fighter’s life isn’t quite as it easy seems. Nor is it solely one man’s decision.

And all the while, in the west, a monstrous enemy makes itself known and positions itself to strike at both the games and Sunja’s heart.

This is blood sport at its finest. At its worst. At its longest.

What listeners say about To Thunderous Applause

Just a filler between books I hope. Definitely not the quality storytelling of the other four books.

What a great series of books! I discovered these books after listening to the author's Mountain Man series - those book are great, but this gladiator series is just so much better! You can't help being drawn into the individual characters' story archs and their plans. The gory arena fight scenes and the build-ups to the fights are done so well. John Lee also does an admirable job with the narration - such good accents. Listened to all 5 books in less than two weeks. I really hope the author continues with this series!

WAY TOO MANY SUB CHARACTERS

I have loved this series so far and have adored everything else by KCB. But I’ve been a bit lost by this. There’s just too much bloody going on!!! I listen to this whilst driving and sometimes going to sleep and have found myself zoning out with the constant barrage off different characters and their sub storylines. I feel this story is being bled for every pound (dollar) that can be squeezed out of it???

If Motley Crue were Gladiators....

Great series of books and excellent narration. I love the world the the author created as well as the characters. Throughout the series the books find the balance balance between humour, violence and emotion. Just wished that a Forth book existed which was about 50 hours long for coronavirus lockdown .

Yet another brilliant exciting book in the 131 days series..I'm totally addicted to this series can't wait for the one..Will now read the Troll hunter...can't wait!!

My original review is below, but as a simple warning, don't start reading any of this series if you want completion. The author has simply abandoned this story arc mid-write to return to older series (presumably with the $) leaving people invested in the characters, high and dry. It's just a cash cow, left rotting to one side!

I've enjoyed some of this series, however roughly every other book is just fill, consisting of unnecessary side stories and dialogue. This is not a bad book in the scheme of things, but it's both short and unnecessary in moving the story forward. Adds no value, and could easily be skipped!

My buddy Keith could make a menu cool to read!

Keith Blackmore can do it all: horror,fantasy,short,novel -what do you need? Support this man;so we can enjoy his stuff often! Unlike certain mega -talented authors; he has a kick- ass work ethic. So, forget unfit toppers -who take 8 years to give fans a book 3 ,or crank out a great series ,then get a little slothful. Let’s crown a new king, one deserving and obviously qualified!

All the books in the series are amazing. Give me MORE! John Lee's voice is amazing and gives displays the books depth. Like MANY other great series every time you come to enjoy characters, except them to die.

Everything is good about these books but it’s like 1 book or 1 story stretched over 5+ books.there is never any resolution. When I started this series and liked the first book enough to continue, I saw it had 5 books. I didn’t realize that it wasn’t complete. If I had known I’d have waited.

The author is definitely milking it.

I had to write KB and beg for more of 131, these books were so damn good! I have grown to love the characters & storyline. I just hope he keeps to finishing or continuing this series

I thoroughly enjoyed Keith's two other series; Breeders and Mountain Man, so I decided to give this one a shot. Absolutely did not disappoint.

I loved the first book so much, that I bought Al the others for kindle and on audible, so I wouldn't miss a beat while on my nightly walks.

The characters all had incredible depth and personality, and the banter between them never got old. Keith did mention this series want finished, but delayed until late 2020.

loved it!!! read it and be immersed in this authors world. tell your friends and get this series the recognition it deserves.

The best in the series. I can't wait for the next!

Adventure, intrigue, love, friendship and war, all no holds barred. Storytelling at its best!

This is a very entertaining series with an outstanding performance by John Lee. However, there are too many unresolved aspects of the entire story. I hope there will be more books to follow.

This is another great installment of the 131 Days series. It has some of the best characters that I have ever felt to know. Unfortunately towards the end of the first half i honestly got tired of the rekindling love affair it contains. But the second half of the book was the best to date. Cant wait for the next one.

A good book with amazing action sets. Spends a bit to much time on army