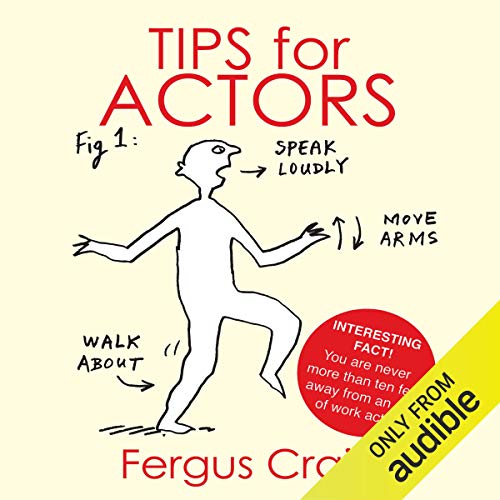 In the most important theatrical audiobook of this or any other decade, twitter sensation @tips4actors gives you all the advice you need to take your acting to the next level. How to upstage your fellow cast members, what to wear on the first day of rehearsals, where to go for a poo in London's glamorous West End - it's all covered in here! Includes advice such as...'Never read the script. Would your character read it? No, of course not. For them the script doesn't exist' and 'When having sex with a casting director, show off your acting by faking an orgasm'.

With bonus content made especially for the audiobook such as a full vocal warm up and advice on accents and radio acting, this is a hilarious parody which demands to be heard.

What listeners say about Tips for Actors

The funniest audiobook I've ever had in my ears

What made the experience of listening to Tips for Actors the most enjoyable?

Fergus Craig is a comedic genius. I laughed out loud several times in the shop much to the derision of the local urchins/youths.

What other book might you compare Tips for Actors to, and why?

This book is incomparable.

I even did the dishes and tidied the kitchen just so I could listen on. My wife is bemused.

I only bought this book because of Fergus' football podcast after I realised it wasn't a real self help book for actors. I am not an actor, although being a doctor my profession at least rhymes with actor. You do not need to be have even considered being an actor to enjoy this hilarious parody.i will look for Mr Craig's next work with bated breath.

For those who know anything about acting or theatre this is a must listen! Read brilliantly by Fergus Craig the Author you get a real, true feeling of the comedy in the book.
If you love humour like that of Alan Partridge, you will love this, as the "character" who reads the books is quite similar in tone and approach. This is a daft book, but I enjoyed every minute. It's got some great "tips" in it - and anyone with any knowledge of theatre or acting will appreciate the humour, irony and sarcasm. There are certainly worse ways to spend a few hours than listening to this book, so go for it!

During lockdown I have been trying to only listen to funny books. This was really funny and made me laugh a lot. The narration is excellent.

A great listen - even more enjoyable than the print book. Throughly recommended for anyone who's involved in acting - or has ever met an actor.

Its really hilarious and i cracked up a lot of times.However i was expecting an acting technique book based on its title which its not, its more of a farce in the name of it.Would have given 5 stars if title would not have misled me.

Hi, I'm not an actor but I know one and he could definitely use some of Fergus Craig's tips. Speaking of tips, I deducted one star because there are too darn many "top tips," I mean, it's in the name. "Top tip" implies only one is the tops!

So although I'm not an actor and I'm sure I can benefit from Fergus' lessons to build confidence or how to turn a phrase for my benefit, I really downloaded this because last week when Fergus skipped an episode of podcast Newcastle Natter so he could star as a customer in a Swedish post office commercial clearly giving credence to his status as an actual working actor, and remembering a couple months back he shamelessly plugged this audiobook, I figured if I downloaded this selection with a spare Audible credit I could make it an extra week until he responsibly returned to what should surely be his priority, the Newcastle Natter. Also, with his English accent when he uses the word "psychophantic," which he used at least twice, so clearly he is super smart.