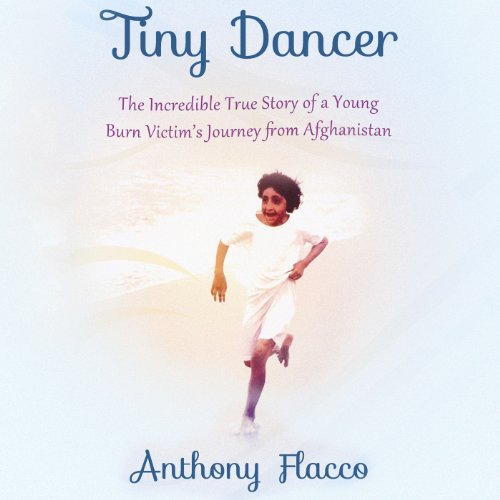 By: Anthony Flacco
Narrated by: Allen O'Reilly
Try for £0.00

The astonishing story of a brave little girl from Afghanistan who not only survived horrific disfiguring burns but was given a second chance at life.

Tiny Dancer is the amazing true story of Zubaida Hasan, a nine-year-old girl from the remote deserts of Afghanistan who, in the summer of 2001, accidentally fell into a kerosene fire while heating water for a bath. Though she was horribly mutilated, her father refused to give up and exhaustively sought help to save his child.

When an American Green Beret soldier by chance sees Zubaida and her father on the street, he decides he must get involved. With assistance from many members of the U.S. military, little Zubaida is given a second chance at life. She is flown to Los Angeles to begin a two-year journey through a series of surgeries performed by famed burn surgeon Dr. Peter Grossman. He and his wife, Rebecca, eventually take the child into their own home. This is a heartfelt and inspiring story of incredible courage equally matched by incredible kindness.

What listeners say about Tiny Dancer

What made the experience of listening to Tiny Dancer the most enjoyable?

I have read a lot of books either based on true stories or are actual life/recollections from other countries. This book was an excellent find as I struggle to enjoy the recent selections of modern fiction. I had almost given up finding a book which fitted in with previous books I have read about countries like Iran with a deep culture to understand.

The title attracted me and I wasn't disappointed with the book as it was a factual story, sad in a lot of ways but the reality of the situation wasn't hidden. I would recommend it to anyone who isn't as keen on escapism type books but wants to learn about another culture through a heart breaking story of the Tiny Dancer who brought the book to life with a typical mischievous yet there is an incredible depth to some of the child's behaviour which added a page turner to the story.

What other book might you compare Tiny Dancer to, and why?

True stories from various countries both fiction and non fiction I have read so many before I joined audible it's impossible to list all of them.

The only bit of the performance I found a little 'odd' was when the narrator sounded as if he was a different person or it wasn't edited quite right in a few places. I can't explain it but it didn't ruin my enjoyment of the book. Overall the narrator was excellent.

I felt the sadness yet enjoyed the liveliness of the child. It isn't a book to curl up with hoping for a pleasant story. It is one which tested my mind and emotions and made me think of what could have happened.

I have gone to a completely different type of book but will always long for more books in this style as I just don't enjoy books which are predictable and seem to be the mainstay of most top books to read. I didn't want this book to end as I knew I would find it very difficult to replace.

I am going to download And The Mountains Echoed as I have read the other books from this author although I will never forget the Tiny Dancer and have recommended it to a friend who like me enjoys true stories even if they can be extremely sad and daunting.