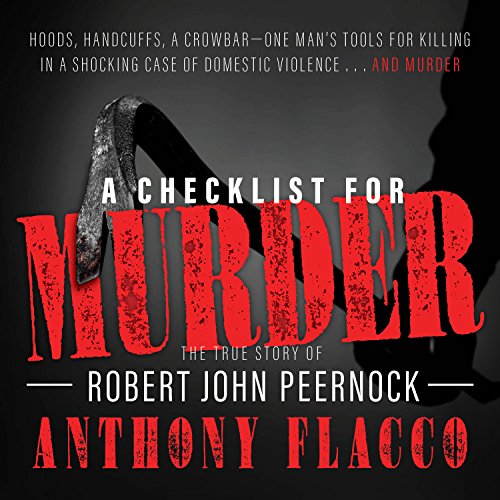 A Checklist for Murder

Robert Peernock appeared to have the ideal life; working as a pyrotechnics engineer and computer expert and coming home to his wife and daughter, he projected the American dream. Even when he and his wife separated, it seemed amicable, just a small bump for the well-to-do family. But there was madness in his house: in private, Peernock was violent, subtly manipulative, and bordering on psychotic. But the horrifying details of his home life would only come to light after Peernock finally lost all control.

Peernock had come home, brutally beaten both his wife and daughter, force-fed them alcohol, and deliberately sent them to their deaths behind the wheel, staging it to look like a drunk driving accident. He didn't foresee that his daughter would survive, and even with years of abuse, her attempted murder, and horrendous injuries, he never anticipated that she would speak so powerfully against him.

Here, New York Times best-selling author Anthony Flacco chronicles the sensational trial and all the terror that preceded it, looking deep into the mind of a deranged killer whose American dream was a waking nightmare for those trapped within it.

What listeners say about A Checklist for Murder

The first part of the book details the crimes and the horror the murderer's daughter lived through. Then the author whisks us on a non-stop roller coaster ride wih police and lawyers fighting to get this man in prison. This author builds suspense so well I was glued to my Android until the end. No dry coutt ramblings....riveting.

The overall book was OK. He is a decent author, however my opinion is he is a terrible narrator. I would have preferred someone like Kevin Pearce being the narrator

It was okay...it just felt like it lacked something. I kept having to rewind because I lost interest so many times.

It's not so easy to find well written true crime books these days, and this was thoughtfully handled. I've known one or two sociopaths in my time, (not murderous ones, but destructive enough) and I suppose I read these books so I remember to steer clear of the red flags. This is a terribly dark story of survival, very well researched. The author is a surprisingly good reader - just animated enough to give importance to the right passages, lending the subject matter plenty of humanity without either going over the top or being boring. Worth the credit.

A Checklist for Murder

This was a very good book. Although, a little drawn out it was very good until the end. The author/narrator was excellent. Very dark and eerie story, this one... So sad for the family.

This could have been much better.

The way this story is told is not to my likings and not a normal true crime typical narrative. It's almost told as a story, the author putting his own creative writing in the events. Events of the true story become a bit fictional almost, I wasn't sure I was reading a true crime at times.

The author isn't awful as a narrator, but I felt he was reading as if his audience was under 16, if not younger.

Pretty good story. Flacco spins an interesting narrative of the gruesome events as they unfolded that day and night. Even more horrifying is Peernock's methodical preparation for the murders. The man is a pit bull.
Flacco's narration is somewhat overwrought at times, occasionally irritating in his rendering of the back-and-forth whiny dialogue between characters.

A Sinister and Vile Man!

Where does A Checklist for Murder rank among all the audiobooks you’ve listened to so far?

This is almost certainly in my Top 3, from the first page it was totally captivating.

Yes, This criminal was intelligent and understands legal issues in order to manipulate and control the direction of the police investigation.

What does Anthony Flacco bring to the story that you wouldn’t experience if you just read the book?

Mr. Flacco does a good job of conveying emtion

If you could give A Checklist for Murder a new subtitle, what would it be?

I can't think of one at this time

Authors should never read their own books. This dragged on and on. Okay for background noise, but that's even pushing it.