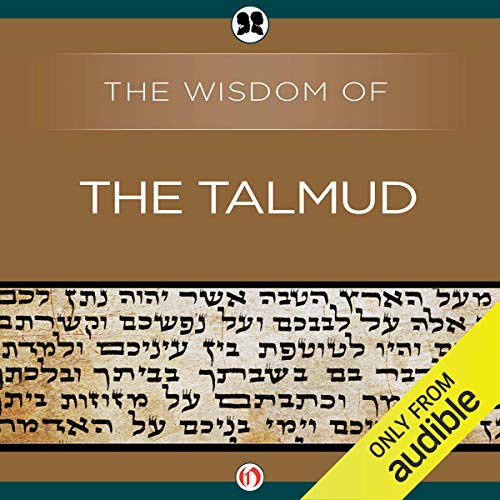 Wisdom of the Talmud

Wisdom of the Talmud

This is a highly comprehensive introduction to the Talmud, the age-old storehouse of Jewish wisdom. Bokser covers the long history of the Talmud, from its origin in the Babylonian exile, its growth through the five centuries after the Roman destruction of the Temple, and the later persecution of the Talmud. The book covers a number of high-level topics, including social ethics and personal morality, with numerous examples from the Talmud. Ben Zion Bokser was one of the major Conservative rabbis of America. He stressed the Rabbinic sages and the Talmud as the source of Judaism. "This is not an uncommon impression and one finds it sometimes among Jews as well as Christians - that Judaism is the religion of the Hebrew Bible. It is, of course, a fallacious impression. Judaism is not the religion of the Bible." Bokser affirms revelation, but revelation is always framed in humans by man. "Man receives a divine communication when the divine spirit rests on him, but man must give form to that communication."

What listeners say about Wisdom of the Talmud

bad narration can ruin a book

The book is okay, but the volume is ruined by a narrator who is not familiar with the subject matter: many of the Hebrew words, surnames, places, holiday names, etc. were horribly mispronounced.

Very introductory: nice as far as it goes, but ...

I am not Jewish. However, my scholarly interests mix so often with Jewish history that some closer, focused look at it was inevitable. As a first introduction to some of the history and background, this work is satisfactory. However, I just bought an actual volume of Talmud and it is a large and complex work, not thoroughly described or demonstrated in this audio. As a legal scholar, I can now see what people are referring to with their common aphorisms about the detail of Talmudic scholarship. I guess all this indicates I am growing more scholarly, and I'm seldom satisfied with a "lite" version of anything anymore. That is not the author's fault here; I think, given the length and scope of this presentation, the author did fine work. But anyone with a serious curiosity about the Talmud might quickly survey this and move on.

There's not much of a story and the narration is so swift that it would be hard to follow even if there was. Seems like this was edited to be obscure and usable as Cliff Notes and only to those already intimately familiar with the subject. It could have been made better by the narrator taking a breath and using more inflection to decompress the dense material being covered. In short, it was a disappointment.

This is an exceptional text for even the lay learner of Talmud. The pronunciation of the included Hebrew terms is poor but intelligible. Don’t let the introduction throw you off of the rest.

The book itself is informative. Unfortunately, the narrator was clearly not coached on how to pronounce Hebrew names or vocabulary words, leaving me cringing and missing out on meaning.

not as complete as I would have liked

Not as complete a reading of the Talmud as i expected. Many mispronounced Hebrew words. There seem have been numerous audio edits that were not cleanly done. But informative none the less.

alot of history, but I'm happy with the sample of what is in the talmud. looking forward to but my own set of books.

Great book ! I enjoyed every minute of it !

I loved every minute of iy and may listen again in a year or two.

The reader mispronounced many terms and names. He obviously had no background in the subject. Excellent work however.