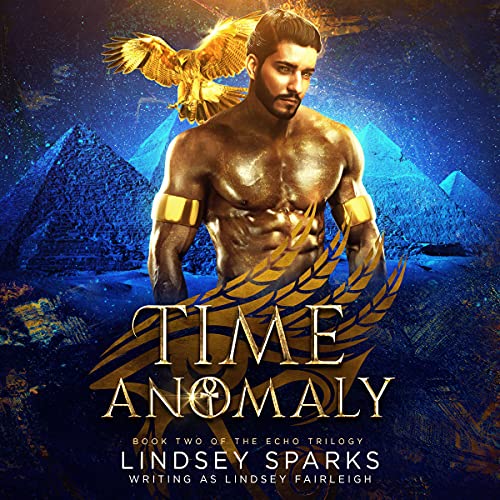 The sequel to Echo in Time.

For most people, time is a river, flowing in only one direction. Alexandra Larson isn't most people....

Present Day...When Lex notices an inky presence darkening Marcus' eyes, she discovers he's no longer what he seemed. Almost too late, she realizes that the man she has entrusted with both her heart and her life is now her greatest threat. Seeking safety, Lex is forced to draw on her god-like powers and flee...to the ancient past.

Old Kingdom Egypt...Hiding in plain sight, Lex takes on the identity of the goddess Hathor as she struggles to blend in thousands of years before her own time. But the safety she sought proves elusive. If the body-snatching spirit of a dead god doesn't kill her, her rapidly worsening bonding withdrawals will. Can she come to an arrangement with Heru, Marcus' ancient counterpart, in time to save her life and the future? Or will the secrets she's hiding push him away for good?

The past clashes with the present in this paranormal saga of ancient prophecies and warring gods. If you like Egyptian mythology, steamy romance, time-bending mysteries, and complex characters, then you’ll love this sprawling time travel adventure.

More books in the Echo world:

What listeners say about Time Anomaly: A Time Travel Romance

Loved it. The links between each of the characters grips the imagination and makes you want more

chapter 11 and a few more after have a horrible echo on the talking. i checked to make sure it wasnt just my phone by downloading the book on my kindle as well still have the echo.

the actul book is briliant and the lady doing the talking is fine but the echo is anyoying.

Wow! Where’d that come from

I highly highly recommend this trilogy, especially if you are a fan of Kate Daniels series, Cassie Palmer series and similar AND Discovery of Witches. Throw in a bit of Somewhere in Time... a different twist on my favorite genre. My top series yet to be knocked out of first is “Fever Series”... this trilogy ranks pretty darn close!

Curious to find out what happened next

Story is somewhat entertaining. Enjoyed the character development. It was creative who she wrote the characters to be. Good plot twist but not interested in ever listening again. One and done.

The only challenging part of this book, is the story line, and the names can be confusing and hard to track and follow. Also the story line very much reminds me of the Discovery of Witches; it closely parallels it.

Gave a 4 for the story because my heart was heavy with the pregnant wife, couldn’t stand it!