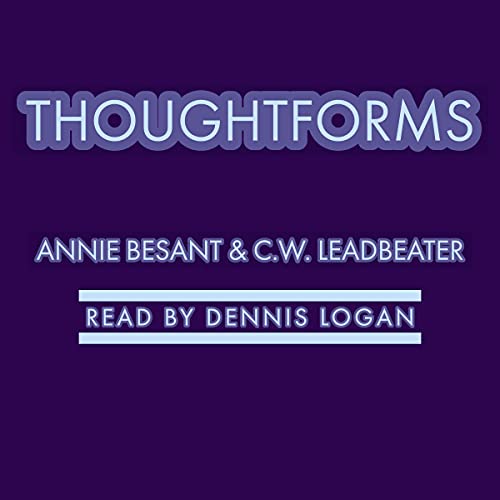 By: Annie Besant,C.W. Leadbeater
Narrated by: Dennis Logan
Try for £0.00

We have often heard it said that thoughts are things, and there are many among us who are persuaded of the truth of this statement. Yet very few of us have any clear idea as to what kind of thing a thought is, and the object of this little book is to help us to conceive this.

Man, the Thinker, is clothed in a body composed of innumerable combinations of the subtle matter of the mental plane, this body being more or less refined in its constituents and organised more or less fully for its functions, according to the stage of intellectual development at which the man himself has arrived.

The mental body is an object of great beauty, the delicacy and rapid motion of its particles giving it an aspect of living iridescent light, and this beauty becomes an extraordinarily radiant and entrancing loveliness as the intellect becomes more highly evolved and is employed chiefly on pure and sublime topics.

Every thought gives rise to a set of correlated vibrations in the matter of this body, accompanied with a marvellous play of colour, like that in the spray of a waterfall as the sunlight strikes it, raised to the nth degree of colour and vivid delicacy. The body under this impulse throws off a vibrating portion of itself, shaped by the nature of the vibrations - as figures are made by sand on a disk vibrating to a musical note - and this gathers from the surrounding atmosphere matter like itself in fineness from the elemental essence of the mental world.

We have then a thought-form pure and simple, and it is a living entity of intense activity animated by the one idea that generated it. If made of the finer kinds of matter, it will be of great power and energy, and may be used as a most potent agent when directed by a strong and steady will.

What listeners say about Thought-Forms