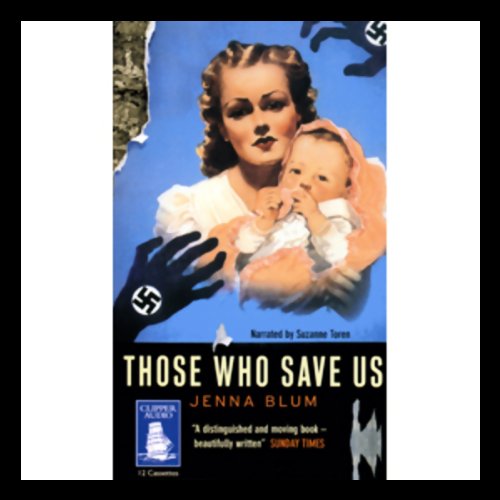 Those Who Save Us

By: Jenna Blum
Narrated by: Suzanne Toren
Try for £0.00

For 50 years Anna Schlemmer has refused to talk about her life in Germany during World War II. Her daughter, Trudy, was only three when she and her mother were liberated by an American soldier and went to live with him in Minnesota. Trudy's sole evidence of the past is an old photograph: a family portrait showing Anna, Trudy, and a Nazi officer, the Obersturnfuhrer of Buchenwald. Driven by the guilt of her heritage, Trudy, now a professor of German history, begins investigating the past and finally unearths the dramatic and heartbreaking truth of her mother's life.
Click here to see all the titles in our Whole Story Audio Books collection.
©2004 Jenna Blum (P)2005 W.F. Howes Ltd.
Historical Fiction
Show More Show Less

"This is a poised, hair-raising debut." (Publishers Weekly)

What listeners say about Those Who Save Us

Really enjoyed this book. It really gets you thinking...a good storyline following the lives of a mother and her daughter..as well as the horrific stories of the 2nd world war and the effect it had on everyone involved.

Those Who Save Us

An excellent, gripping, thought provocking 'story book'. My only problem with it was some of the historical facts - the American & Russians liberating Germany and not a British Regiment in sight - but I won't hold that against the author, as the rest of the book was superb.

Tried but could'nt do it

As I am from a generation that didnt have to live through this era I have always had an interest in both sides of the story. Try as I might I couldnt get into this book. I kept coming back to it hoping I was in a better frame of mind to listen but eventually I gave up.
I think the narrator was wrong- she sounded like a litlle girl and which was off-putting as well as very irritating. It got to the point where i didnt care what happened anymore !! which is quite disturbing as it sounded like a story that needed to be told.
I will just have to rely on reviews and hopefully be able to work out what happened.

10+ for both story and narrator

A fantastic moving story.
The narrator is first class.
Worth a download.