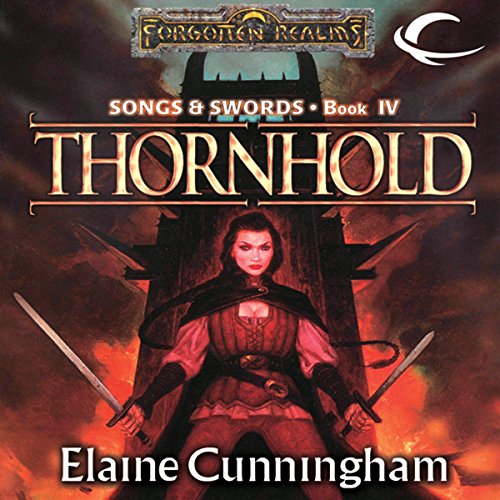 By: Elaine Cunningham
Narrated by: Eric Michael Summerer
Try for £0.00

All is not well in the City of Splendors. A new Zhentarim threat lurks in the shadows of Waterdeep. Roguish Harper Bronwyn is sent by Archmage Khelben Arunsun on a mission to meet her long-lost father and reclaim her bloodline's dangerous heritage. She uncovers a family secret that threatens to destroy not only Bronwyn, but the Harpers themselves!

What listeners say about Thornhold

Would you listen to Thornhold again? Why?

I would not listen to Thornhold again. While it was enjoyable the story was a little too convoluted. There are Paladins and evil sorcerers... girls being reunited with their fathers... the whole gambit. Oddly, I felt the daughter/father thing with Bronwin and her father closely resembled that of a certain half-elf female from the previous series entries. It was like the same situation with different characters. Eric Michael Summerer was terrific as always.

The conflict between the Harpers and Paladins was interesting. I didn't feel like the Harpers did anything wrong like many other reviewers (they did what they always do). The least interesting aspect was the family affairs that took place. I know it is FR but it seemed far fetched and played out.

Which character – as performed by Eric Michael Summerer – was your favorite?

Dwarf (sorry I forgot his name).

I'm finishing up the series... this book had promise with a different set of characters, but the author played the uninteresting family card for a few too many chapters. Learning about the Harpers and Paladins was nice though.

Family can't live with them.

What made the experience of listening to Thornhold the most enjoyable?

A proper voice acting that gave each character a distinct voice and made the listening fluid and without any pauses to understand which character is currently speaking.

The story behind Bronwyn Caradoon and the intrigues between The Harpers and The Knights of Samular, are great resources for any D&D campaign set in the Forgotten Realms.

Would you listen to another book narrated by Eric Michael Summerer?

Powerful artifacts can come with a hefty responsibility

The non-character narration suffered from a somewhat monotonous voice and at times felt as if it was narrated by stringing words together like an answering machine.