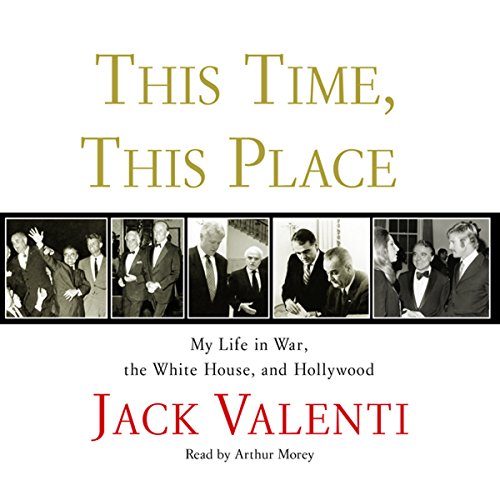 This Time, This Place

My Life in War, the White House, and Hollywood
By: Jack Valenti
Narrated by: Michael Douglas
Length: 5 hrs and 55 mins
Categories: Biographies & Memoirs, Celebrities
1 out of 5 stars 1.0 (1 rating)

This Time, This Place

With the nation at war in the 1940s, 22-year-old Jack Valenti flew 51 combat missions as the pilot of a B-25 attack bomber with the 12th Air Force, based in Italy. In 1963, he was in that fateful Dallas motorcade. And for three years, with the nation reeling from the assassination of a beloved president and becoming embroiled in a far different kind of war in Vietnam, he worked in the inner circle of the White House as special assistant to President Lyndon Johnson. Then, for the next 38 years, with American society and popular culture undergoing a revolutionary transformation, Valenti was the public face of Hollywood in his capacity as head of the Motion Picture Association of America.

Been there, done that, indeed. Texas-born and Harvard-educated, Valenti has led several lives, any one of which could have provided ample material for an unforgettable memoir. As it is, This Time, This Place is the gripping story of a man who saw the terrible face of war while fighting with skill and bravery for his country; who was in the room as political decisions were made that would benefit or devastate countless lives in this country and on the other side of the world; and who championed the interest of the vast and globally influential movie industry with tenacity and vision.