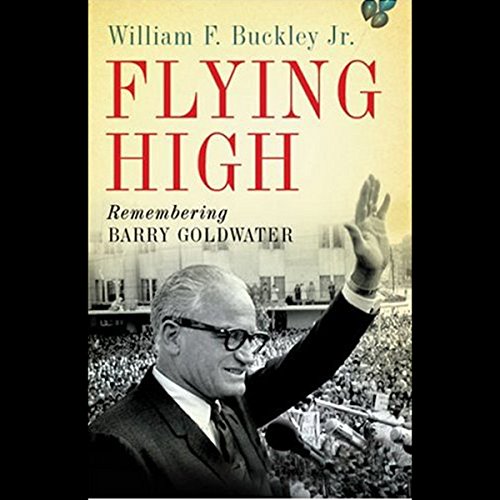 Buckley's National Review was at the center of conservative political analysis from the mid-50s onward. But the policy intellectuals knew that to actually change the way the country was run, they needed a presidential candidate, and the man they turned to was Arizona Senator Barry Goldwater.

Goldwater was in many ways the perfect choice: self-reliant, unpretentious, unshakably honest and dashingly handsome, with a devoted following that grew throughout the 50s and early 60s. He possessed deep integrity and a sense of decency that made him a natural spokesman for conservative ideals. But his flaws were a product of his virtues. He wouldn't bend his opinions to make himself more popular, he insisted on using his own inexperienced advisors to run his presidential campaign, and in the end he electrified a large portion of the electorate but lost the great majority.

Flying High is Buckley's partly fictional tribute to the man who was in many ways his alter ego in the conservative movement. It is the story of two men who looked as if they were on the losing side of political events, but were kept aloft by the conviction that in fact they were making history.

What listeners say about Flying High

A review of conservatism far right

Buckley’s book, Flying High, is much more a memoir of the conservative movement in the early 1960s than it is a biography of Goldwater. As with almost everything Buckley wrote, the book becomes autobiographical on page one. Buckley has a number of great stories about various individuals in his circle: Charles Manion, a law professor at Notre Dame, Suzanne Lafollette, a former editor for Albert Jay Nock; James Burnham and Frank Meyer, former communists turned conservatives.

Buckley discuss Ronald Reagan’s famous television defense of Goldwater, “A Time for Choosing”. He says William Baroody the leader of the American Enterprise Institute wanted to ignore or condemn Reagan as he feared Reagan’s influence on the movement, directing monetary resources away from Baroody’s control.

Buckley never states it explicitly, but it becomes clear that the Goldwater movement suffered from the same ills as all anti-statist movements: a division between and with traditionalist, libertarians, and the militarist camps.

Reading Buckley always has me scrambling for the dictionary. Brent Barry narrated the book.

I purchased this book because references to it by Christopher Buckley in his touching (and hilarious) book “Losing Mum and Pup.” “Flying High” was the last book published by WFB. “Christo” assisted in typing and editing the final draft. I wanted to know more about what WFB was thinking during his final days.

The casual reader might infer from the title (so similar to Buckley’s sailing memoirs “Airborne” and “Atlantic High”) that the book consists of personal anecdotes about travels with Goldwater, perhaps while sailing or flying in Goldwater’s private plane. To the contrary, Goldwater himself plays but a peripheral role in the book. The real focus of the book falls on Buckley’s Yale debating partner and member of the National Review editorial staff, L. Brent Bozell, Jr.. Bozell is revealed to have been the ghostwriter of Goldwater’s book “The Conscience of a Conservative.”

This book is primarily an appreciation and exegesis of “The Conscience of a Conservative” together with recollections of how Buckley and his associates at National Review influenced the Republican platform in 1964 and how their views were ultimately vindicated by the election of Ronald Reagan in 1980. The book is sometimes interesting, occasionally (very occasionally) compelling, but mostly dated and of little relevance to the current national debate.

If you could sum up Flying High in three words, what would they be?

What was one of the most memorable moments of Flying High?

The realization that Goldwater didn't actually author "The Conscience of a Conservative" was memorable.

He was good, not excellent.

I would say yes, but it's been a while since I listened to it. I know there were some incidents I didn't know about but really enjoyed hearing about. For the life of me, I can't recall the specifics.