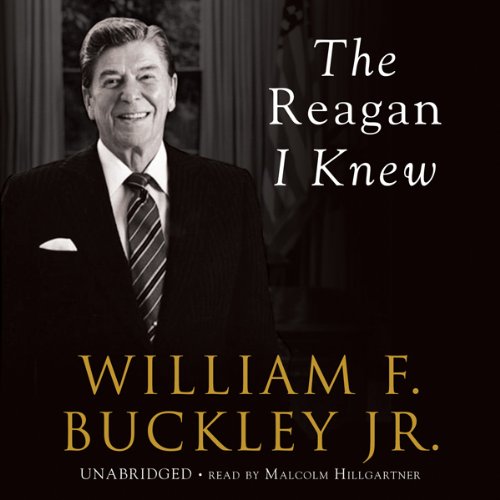 The Reagan I Knew

The Reagan I Knew

In The Reagan I Knew, the late William F. Buckley Jr. offers a reminiscence of 30 years of friendship with the man who brought the American conservative movement out of the political wilderness and into the White House. Reagan and Buckley were political allies and close friends throughout Reagan's political career. They went on vacations together and shared inside jokes.

For all the words that have been written about him, Ronald Reagan remains an enigma. His former speechwriter Peggy Noonan called him "paradox all the way down," and even his son despaired of ever truly knowing him. But Reagan was not an enigma to William F. Buckley Jr. They understood and taught each other for decades, and together they changed history.

The individuals who led conservative politics.

For anyone interested in conservative politics this is interesting background history. First-hand interactions with history defining individuals.

Excellent book, well written and very entertaining. You move through it very fast. I don't want it to end.

Would you consider the audio edition of The Reagan I Knew to be better than the print version?

The people in the book are so charming and gracious.

He's a good narrator. The voice is pleasant and harmonious with this set of characters.

Wow What A Book!

I can't say enough about this book. It's full of historical moments, wonderful letters between WFB and the Reagans and insights into the two men that are entertaining and fascinating. This book is a MUST have if you were a fan of Reagan or Buckley or both. You will learn things you didn't know and find yourself with even more appreciation for these two titans.

Good book about a great man

President Reagan was definitely an interesting man. This book reinforces how important he was to this nation.

Buckley's Prose Should Be Imitated!

Buckley's prose continues to impress me, even after his death. I recommend this book for two reasons which could easily be added too: 1. Listening to Buckley's narrative and personal writings is so unique and truly pushes one to improve one's writing skill; 2. We learn and even participate in the unique and intimate relationship between WIlliam F. Buckley and the Reagan Family.

Mr. Hillgartner did an excellent job with his narration and with his subtle accent for Buckley...the listener gained a personal touch with the author.