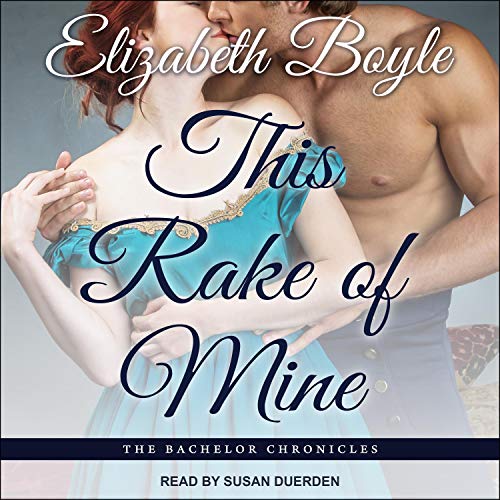 This Rake of Mine

By: Elizabeth Boyle
Narrated by: Susan Duerden
Try for £0.00

When the rakehell Lord Jack Tremont kissed Miranda Mabberly, mistaking her for his mistress, neither realized his reckless act would cost Miranda her reputation, her fiance, and her future. But for Jack, it was a kiss that would haunt - an intoxicating memory of a woman lost to him forever.

Years later, hiding incognito far from London - a teacher at Miss Emery's Establishment for the Education of Genteel Ladies - Miranda has made a respectable life for herself, away from the ton and the dangerous men who inhabit it. When a penniless, much humbled, though still damnably attractive Jack arrives at the school to escort a rebellious young niece home, Miranda does her best to avoid the rogue only to end up tumbling into his arms - and reawakening a desire that is anything but proper. She might want to deny her heart, but Miranda's resolve is no match for a trio of schoolgirl matchmakers who knows true passion when they spy it. Now they won't rest until their all-too-proper teacher and the reprobate lord discover the love that is their destiny.

What listeners say about This Rake of Mine

This is another enoyable book by Elizabeth Boyle. The narrator - Susan Duerden - is Perfect as always!
I look forward listening to the next Bachelor Chronicle!

Once a Rake, always a Rake

This is the second book in a series, but it easily stands alone. The first book, Something About Emmaline, is much better, in my opinion. This book is a little slow, totally ridiculous plot and I did not feel any chemistry between the male and female leads. The narrator is excellent.

I am returning this book. I would never listen to it again.

Almost didn’t read this one

The lead female was so young, weak, and whiny in a previous book that I passed on this one for almost a year. I’m glad I came back to it, it takes place 9 years later and the character is now a mature woman and not annoying like I was expecting. Loved the story

While I completely enjoyed this tale, I felt like I was missing something. Characters and events were mentioned from the first book, as if there had been an entire book between them, but this is listed as book 2.

love the narrative and the story. this series has likeable characters. past love and happiness

this was interesting but not great !

I enjoyed the first book better..while the book was interesting I didn't find it to be something I couldn't put down.

The characters were wonderful and the story plot was so intriguing ! Kept my interest from start to finish. I loved it!

This Rake of Mine

This book was so long.I thought I would never finish listening.I probably won't get this author again.