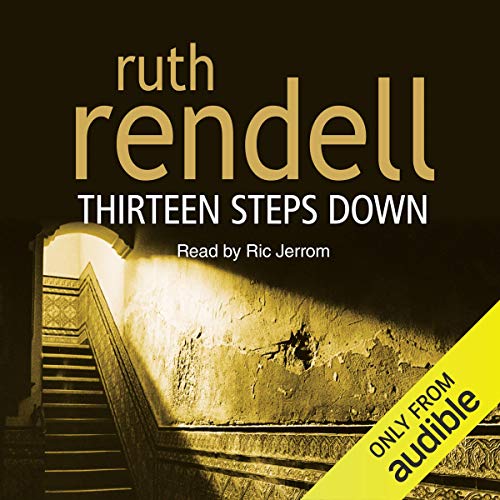 By: Ruth Rendell
Narrated by: Ric Jerrom
Try for £0.00

Mix Cellini (which he pronounces with an S rather than a C) is superstitious about the number 13 and has always felt dogged by ill-luck. In the house where he lives, there are 13 steps down to the landing below his rooms. His landlady lives her life almost exclusively through her library, blind to the neglect and decay around her. However, Mix is obsessed with the life of the notorious John Christie, who lived in the same Notting Hill neighbourhood at 10 Rillington Place. He is also infatuated with a beautiful woman who lives near-by, a model who wouldn’t look twice at him. Both landlady and lodger are caught up in their own psychologically twisted parallel worlds. But when reality intrudes into Mix's life, a long pent-up violence explodes.

What listeners say about Thirteen Steps Down

This novel, in which exercise machine engineer, Mix Cellini becomes obsessed with a local model, Nerissa Nash. He lives in a large dilapidated house in Notting Hill owned by the elderly bluestocking curmogen, Gwendolyn Chawcher. This being Rendell, Mix's intense interest in local serial killer Reginald Christie (of 10 Rillington Place fame) begins to take over his whole existence.

I suppose that the sheer output of Rendell must have made her repeat a few characters along the way. Also, many of her third person psychopaths began to gel into one character. This novel in particular, reminded me very much of the plot and characterisation of 'Going Wrong'.

That said, it's classic Rendell, so lie back and enjoy. As ever, the versatile vocal talents of the narrator, Ric Jerrom, are an aural treat.

Really enjoyed this, even if the beginning didn't immediately pull me in and the end a little rushed but delightfully ironic

Could have done better

It took what appeared to be a very long time before something happened.

The ending, it sort of fizzled out.

Have you listened to any of Ric Jerrom’s other performances? How does this one compare?

Yes, loved him as Lord Peter Wimsey in Murder Must Advertise.

Was Thirteen Steps Down worth the listening time?

Yes, I listened to it a second time, so it can't have been as bad as it seemed to be the first time around.

I haven't read any of Ruth Rendell's books before, but decided to give this one a go seeing as it was narrated by Ric Jerrom. I would have liked the action to have begun a little earlier than it did, and not have ended with a whimper. Maybe I am asking too much, but I do like a bit more action.

Didn't finish this book and returned it. Didn't mind the concept of the story but found it very dull.

Her stories are addictive, with very human tho creepy characters. Loved the old ladies in this one and their dialogue.
Fantastic reader too!
If you like a bit of suspense with sharply drawn characters and unexpected twists you will enjoy this. M

One of Rendell’s best

I have read most of Ruth Rendell’s books over the years and am now listening to them. I’ve always thought her stand-alone novels were better than the Wexford books and this is one of the best.

This book is about an elderly lady and her “lodger” who both lead interior lives greatly at odds with reality. She pines for the love that got away; he longs for romance with a famous model and contrives to meet her.

It’s a Rendell book so of course there are murders, oddballs, creepy settings, all vividly brought to life and enhanced by the excellent narration of Ric Jerrom. There are no mind-blowing twists or contrived occurrences; everything proceeds about the way you’d expect it to in real life. The fun is in the way the events are interpreted through the faulty prisms of the characters’ minds.

wow, this was a disappointment

This is the first Ruth Rendell novels I have "read", but I love the several Barbara Vine novels that I have listened to through Audible........I find it hard to believe that they're written by the same person. This book is repetitive: the reader is subjected to repeated, almost identical descriptions of how badly kept the house is and the extent of the disrepair. This book is static: the characters don't change, they keep saying and doing the same things over and over again, and the plot moves at a snail's pace. The book is derivative: there are no surprises in what happens, there's no undiscovered thoughts or motivations, and the only "surprise" about the ghost is pretty unbelievable and kind of fizzles in the end.

Added to that is the lackluster narration, which is occasionally cliched and occasionally undifferentiated (between characters and times).

A disappointment for this Barbara VIne fan.