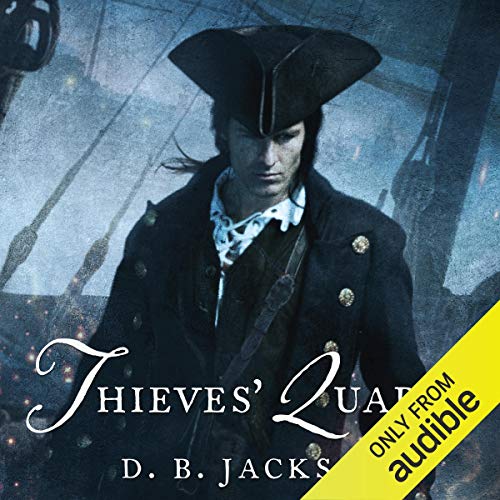 By: D. B. Jackson
Narrated by: Jonathan Davis

Ethan Kaille isn't the likeliest hero. A former sailor with a troubled past, Ethan is a thieftaker, using conjuring skills to hunt down those who steal from the good citizens of Boston. And while chasing down miscreants in 1768 makes his life a perilous one, the simmering political tensions between loyalists like himself and rabble-rousing revolutionaries like Samuel Adams and others of his ilk are perhaps even more dangerous to his health.

When 100 sailors of King George III's Royal Navy are mysteriously killed on a ship in Boston Harbor, Ethan is thrust into dire peril. For he - and not Boston's premier thieftaker, Sephira Pryce - is asked to find the truth behind their deaths. City Sheriff Edmund Greenleaf suspects conjuring was used in the dastardly crime, and even Pryce knows that Ethan is better equipped to contend with matters of what most of Boston considers dark arts. But even Ethan is daunted by magic powerful enough to fell so many in a single stroke. When he starts to investigate, he realizes that the mass murderer will stop at nothing to evade capture. And making his task more difficult is the British fleet's occupation of the city after the colonials' violent protests after the seizure of John Hancock's ship. Kaille will need all his own magic, street smarts, and a bit of luck to keep this Boston massacre from giving the hotheads of Colonial Boston an excuse for inciting a riot - or worse.

Thieves' Quarry is a stunning second novel in D. B. Jackson's Thieftaker Chronicles.

This is the second book in a fantastic historical urban fantasy series. I loved it!

Ethan Kaille is an interesting character. He is a Thieftaker, a conjurer who uses his magic to track down thieves and the stolen items. I liked this eighteenth century gent. He has a very sharp mind, and is quite talented as a magical detective. He has a dark past, which gives him an air of mystery.

I downloaded this as an audio book, so I could listen to it while doing housework, or just before going to bed.
The tale was again narrated by Jonathan Davis, who brought the characters and story alive with his narration. I could listen to his voice for hours! In fact, I did! I became so involved in the story that I didn't realise how much time had gone by!

The story took me on a journey into eighteenth century Boston. I am not a history buff, but I am interested in this period in America's early history. The author has woven a wonderful tale into this backdrop.

Ethan Kaille reminded me of Jim Butcher's Harry Dresden. However, Ethan is very much his own character and has his own quirks and way of doing things. He uses elemental magic - earth, wind, water, air and fire - for his spells. It has been a pleasure watching this character grow in confidence with his conjuring abilities, and trying new spells.

In this story, he is hired by the Customs office to investigate a mysterious mass murder on board a Royal Navy ship. The mystery of the deadly conjuring sees Ethan facing even more danger than ever before. Meanwhile, Sephira Pryce, Ethan's nemesis and fellow Thieftaker, is determined to get more clients by hiring her own conjurer.

The story has several twists and turns, which kept me hooked from beginning to end. The descriptions of the characters and scenes brought Boston in 1768 to life; I could picture it quite clearly. I did, however, feel that some of the scenes were a little too long and drawn out at times. However, that being said, there was plenty of action and danger with which to keep me interested and entertained. There was one scene in particular that upset me. Not because it was particularly gruesome or anything like that, but just because Ethan was rendered helpless and I wanted to rescue him. Silly, hey? The mystery of who was behind the deaths on the ship was a huge surprise; I never guessed who the culprit was, and was totally shocked when they were revealed. The end of the story has a twist that I didn't see coming, and has me looking forward to reading/listening to the next book in the series, A Plunder of Souls as soon as possible.

D.B. Jackson has written a fantastic historical urban fantasy. I loved his writing style, which was fast paced and action packed, and the story flowed wonderfully from beginning to end. I would most definitely read more of this author's books in the future.

There are a few scenes of a sensual nature, though not explicit, and scenes of cutting (for spell making) that may upset some readers. Therefore, I do not recommend this book for younger readers or those of a nervous disposition. However, I highly recommend this book if you love paranormal, urban fantasy, mystery, thriller or detective genres. - Lynn Worton

A strong narrator and a well written story equals another 5 star rated book, which is not something I do frequently.

Returning to the streets of Olde Towne

If you could sum up Thieves' Quarry in three words, what would they be?

He is more committed to his lady. He is growing more aware of the things he could do and should not do. He is learning that mouthing the "right" words will not keep him out of the fray. He is growing into the the perils of the city instead of skimming over them.

He has become the Theiftaker in my ears.

When he hauls Canice upstairs in front of her clientele to talk to her and gets cheered because they all think he is being amorous. He blushes so nicely. And Canice takes it with amusement.

I highly dislike his sister.

After thoroughly enjoying the first book, I bought this next installment. The narration by Jonathan Davis was again excellent.

Sephira Pryce, Ethan's competitor, is again a completely unscrupulous and amoral character. I find myself rooting for Ethan to put us out of our misery with regard to her but he is too honorable to do so. Diver and Cannice are their loyal selves; Ethan finds himself in love with Cannice. He always thought he would not be the marrying kind.

The only error I noticed in this otherwise entertaining story is a fairly big one and I took off a star for it. The author states Ethan fought in the Crimean War. As this story is set pre-Revolutionary War 1768, and the Crimean War did not start until October of 1853, this simply is not possible.

Nevertheless, I liked the rest of the book and plan to get the others in the series.

I really enjoy this series. it has a wonderful blend of fact and fantasy. Ethan always takes such a beating in these stories. it sometimes feels a bit excessive. I think it would also be nice to see him expand more as a conjurer and learn more from someone with more experience. I think it would have been interesting if he had told his sister they could cast in tandem. I would also like to find out more about Uncle Reg. Maybe there will be more in the next book

If Dresden were an Historical read

The British military have landed an occupying force in the colonies and Ethan Kaille, Thieftaker, has been called to a British ship. What he finds there nearly stops his heart. The crew, down to the last man, is dead, not a mark upon them. Kaille confirms that they have died at the hands of a conjurer - and he is the Crown's favorite suspect.

A murder mystery set against the turmoil of pre-revolutionary Boston, Ethan Kaille is once again up against a powerful conjurer and it will be his wits, not his spellwork, that saves him. Meanwhile, his nemesis, Saphira Pryce, has obtained her own conjurer, his family have decided he can be of use, and the conjurers of Boston are keeping Kaille at arms' length. It's one heck of a ride. He and Harry Dresden can most definitely compare injuries.