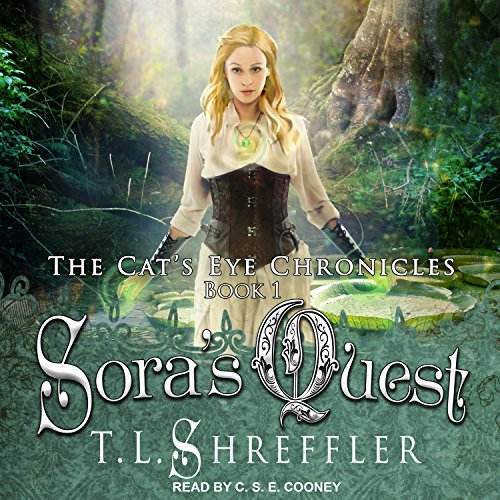 Sora Fallcrest always dreamed of adventure, but as a member of the nobility, she learned the ways of a Lady instead. Now 17, she is expected to choose a husband and marry. She plots to run away, but just as she is stepping out the door, she runs into a mysterious man - and is kidnapped.

Abducted from her manor, Sora is plunged into a world of magical races, arcane jewelry, and forgotten lore. She finds herself at the mercy of a dangerous assassin, haunted by an even darker past. She yearns for freedom, but he won't let her go - not when her Cat's Eye necklace is the only thing that can save his life.

But the necklace itself presents a problem. It is an ancient device from the long forgotten War of the Races, and its magic has the ability to steal souls. Can Sora learn to wield its power, or will the power wield her?

What listeners say about Sora's Quest

this series is one of my favorites, the kind where the characters become like family. cant wait for the 6th!

Such an amazingly creative and unique fantasy quest! I loved Sora, our main character, and her longing for adventure just like so many of us feel. I was so impressed with the detail that was put into creating this story, and the arcane jewelry. C.S.E. Cooney’s narration was breathtaking, and effortlessly transported the listener into a magical world full of danger and deception. Cooney did an excellent job at understanding the tone of each character, and giving them a true voice in the story that allows the listener to fully bond and understand each character’s quirks and differences, along with their intentions.

Finally someone who doesn't give the heroine a whiny overdramatic voice! And doesn't try too hard with the guy voices.

I had high hopes & low expectations for the audiobook version but in the end I was pleasantly surpised. I give C.S.E Cooney a solid B+ overall for narration - and that's high marks from me.