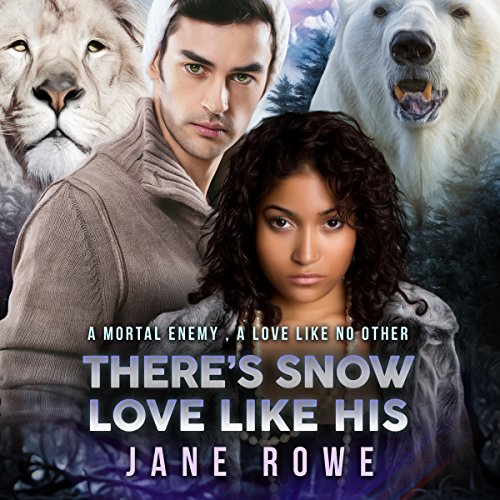 Lion shifters and bear shifters have been mortal enemies for generations. So when the snow lion prince Ted falls for a polar bear, it does more than take him and his people aback.

Betty is like no woman he's met before: beautiful, curvy, and with an air of sexy confidence, which he hasn't seen anywhere in his pride.

Soon the two embark on a forbidden love, forsaking all rules meant to keep them apart. But when a game-changing secret held by the polar bears is revealed to him, where will Ted's true loyalty lie?

Find out in this thrilling yet sexy romance by best-selling author Jane Rowe of Shifter Club.

Suitable for ages 18+, only due to sex scenes so hot it'll melt your ice cap. ;)

This was a funny take on a fight between women who could turn into polar bears and men who turned into snow lions. When the two lovers meet they are immediately attracted to each other which is a first for each of them. They have both vowed to defend their home and Family members but one of them is aware of what the other is and keeps it a secret.
Betty is one of the top defenders of her people as well as the best food gather and trainer. She has spent all of her time defending and gathering food. Ted visits the shop that she works in and makes friends with her. Which one of them knows the others secret? The two embark on a forbidden love, forsaking all rules meant to keep them apart.
Another mystery is revealed and an attempted kidnapping that eventually leads to an exchange and a new discovery. What does a gold encased mystery bird have to do with the story? Well you will have to listen to find out. Keep listening past the first two chapters and you will enjoy the story.
"This audiobook was provided by the author, narrator, or publisher at no cost in exchange for an unbiased review courtesy of Audiobook Blast."
If this helped you to choose this book please click yes below.

Interesting "Romeo & Juliet" like situation. And finding out the hidden back story was fun. I really hope the writer continues the story about the two commnunities living together especially since it seem the people were "hooking up" in the secret caves. This story was entertaining.

I liked this book. It was full of suspense, hope and love. The narration was great even the voice inflections. It's a wonderful concept, mating and loving for life, that's the story and life of Ted and Betty!

This was a good basic shifter romance story where two enemy clans are brought together by love. It was fast paced and the narrator did a good job of giving the characters different voices.

BUT, I won't be reading this story again. It took me three tries to figure out the beginning of the story and how the ancient Roman finding related to the recent scientific discovery and little boyscouts. Then the timeline problems got much worse which distracted me from the story. Then I get to the end of the story and the next 20+ years are just summed up in a couple of pages. It was nice to see how the characters ended up but really did their whole life history have to be laid out? It was a good one time read and nice exposure to the author's writing style but I won't be looking to read it again any time soon, if ever.

I really loved this book... please keep them coming..... I can't wait for the next ones

I loved the book! Why didn't you explore Ted's sexuality before he met Betty. He said his little friend didn't like fish (which is code for he is gay), then he didn't know sex would like it was with her. I would like to have known more about Ted.

Couldn’t get past the narrator

I have taken to listening to audiobooks as I do other things. This particular book was one I was excited to start. But the narrator was just not good. She spoke quickly and the pitch of her voice just didn’t work for me. I went to get the book on kindle instead.

I couldn't finish the audible because the narrator was just horrible. She should only read children's books once she learns to slow down. The characters sounds childish and I felt I should've been sitting in a circle on the floor like children being read to. I'll probably read the kindle version. The author should remove the book from audible until another narrator can do her book justice..

I like the book but the narrator was distracting. She read as if she were trying to speed read or rush through the pages. It takes away from the emotion of the story.

This book is well written. The characters are engaging from the beginning to the end. I like it has mature lovers coming together to find themselves. There is young love that blossom to mature love.