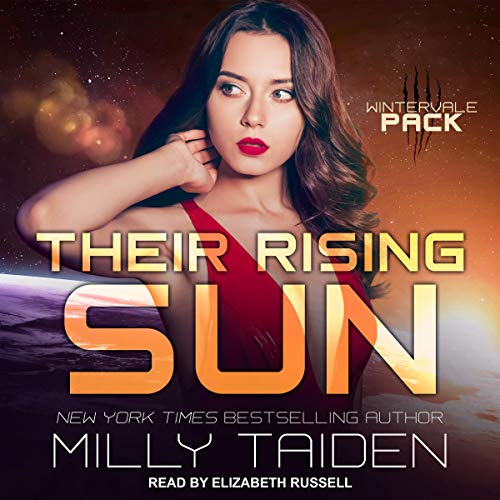 By: Milly Taiden
Narrated by: Elizabeth Russell
Try for £0.00

When Blake Parker hears about an opportunity to help the alien planet Dearia repopulate and rebuild, she jumps at the chance to become a surrogate. Being a surrogate like her mother, giving shifter alpha males a family, it just feels...right.

Not long after arriving, Blake's surprised to meet not one but four handsome wolf shifters who claim she's their mate. Four guys are ready to share her in the dirtiest ways possible. She can't believe her luck. Until it runs out.

When Blake's life is threatened by a race of ancient monsters who rise from the grave, hungry for her blood, it's up to her mates Jericho, Mace, Serge, and Castien to keep her safe. But before they can train her to fight and get her to accept that she's destined to be theirs forever, they'll need to uncover the secret of her true heritage.

What listeners say about Their Rising Sun

I this was a great start to this new series. I can’t wait to see how this continues I think there was a previous series that this ties into but I’m not sure which one that is I will hunt it down LOL but it definitely lives up to what I expect from Milly Taiden and the performance was excellent

A lot going on

Going to an alien planet to become a surrogate for two men turns into 4 mates. The men, 4 wolf shifters are an Alpha and Beta, ahealer and an enforcer. Blake is easy going and is giving back as she was a surrogate mother born child. But falling for 4 guys isn’t easy then Blake manifests powers not exhibited at home making her a target by those on the planet that may want to start another shifter war. This is a different kind of shifter premise and a typical Milly Taiden book when it comes to amorous scenes throughout the book.

I love this combination of alien world and shifters. This storyline will keep you engaged from the beginning to the end. No cliffhanger in this HEA book, however there are some heartstopping events. The narrative is excellent and I would recommend listening to this book of you enjoy sci-fi and shifters.

not bad but not the best of her books.

Overall it was kind of... blah. I love this author and have listened to her and read her books. This book just didn't do it for me. Kinda makes me sad.