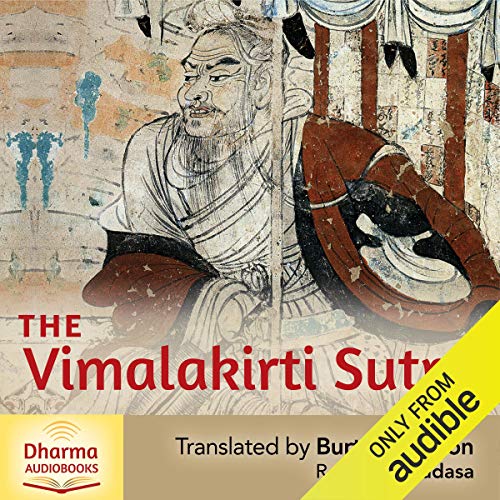 The Vimalakirti Sutra is one of the most popular of all Mahayana sutras, being especially loved and revered in the Far East. One of the reasons for the sutra’s popularity is that its principal character, Vimalakirti, is not a Buddha or a Bodhisattva or even a monk, but a layman with a family living in Vaishali in India, leading - apparently - a secular life.

This does not hinder his ability, the Sutra proclaims to be a man of remarkable spiritual understanding and attainment - so much so that he confidently lectures and advises arhats (enlightened-monks) and bodhisattvas (perfected individuals working for the enlightenment of all) on spiritual matters. These range from the 10 precepts to be observed (including not harming beings, the practices of generosity and skilful speech) to the six perfections (including morality, renunciation, spiritual vigour and equanimity) and the four immeasurable qualities including loving kindness, compassion and empathetic joy.

The central chapter, and the climax of the Sutra is a long and rich discourse on nonduality. Unusually for such a work, the Vimalakirti Sutra is threaded with touches of humour. The story which frames the work recounts how Vimalakirti feigns an illness in order to prompt arhats - figures such as Shariputra and Subhuti - as well as numerous Bodhisattvas to visit him and inquire after his health, thus creating opportunities for the famous layman to expound the Dharma, the Buddha’s teaching. They are initially reluctant to make the visit because they have, in the past, encountered Vimalakirti’s skill and received a bit of a spiritual drubbing!

All this is cast in a mythical and imaginative Mahayana setting with thousands of figures of all kinds from all the realms of the many worlds finally coming to visit Vimalakirti - and all fitting comfortably in his small house in Vaishali. Though of Sanskrit origin, it is not known when or where the Vimalakirti Sutra was written, but it is the translation by the fifth-century Chinese scholar monk Kumarajiva which has provided us with the fullest and most satisfactory source text, and which Burton Watson has used to render it into English.

The Vimalakirti Sutra is read with presence and understanding by Taradasa.

What listeners say about The Vimalakirti Sutra

Excellent performance of a classic

One of the classics in world religions, the Buddhist canon, and literature from antiquity. This translation is by Burton Watson, a giant of Chinese translation. The language is plainspoken and accessible. It's performed with clarity.

This is sutra necessary for anyone interested in Buddhism in India, Tibet, or China.

The sutra even has a sense of humor. But it's filled with dharma that will be familiar to any Mahayana practitioner.

The teachings here are vast and profound. Expect to be surprised.

What a wonderful sutra powerful presence

This sutra has such power and depth. It truly opens the world of peace and transcendence in contact with daily life just as it is. It creates a mythic landscape of mind that asks us to truly live open simple alive and engaged. I’m grateful for the truth and clarity of the reading and the peace it has brought into being in my own heart and life.

A light and humorous Sutra to be sure

This was such a well narrated book. I have an auditory processing disorder that makes understanding narrated books, at times, challenging. Usually, I find accents are harder for me to follow without facial mannerisms etc., and this narrator has an accent. Still, it was completely clear for me the entire time. I am now looking for his name as I purchase new books. While he is not the only voice on audible I have understood, he is the only voice reading Buddhist texts I have understood thus far.

As for the "book". It is a Sutra, so how do you comment on the quality of the supposed words of the Buddha and Bodhisattvas? One could comment on the translation, but really only scholars who have read and studied different translations could comment on the quality of any translation. I will say that I found the Sutra itself very engaging. It is humorous at times, extremely flowery most of the time ( and Tadasssa somehow did both of those characteristics lovely justice through his narration). I had never heard of this Sutra and am so glad to have stumbled upon it. As a reader, I found it's writing is poetic literature. As a Buddhist, it is another expression of the same timeless Dharma that is expressed in varying ways through other Suttas and Buddhist scriptures and canons. In Buddhism there are many paths to the same Nirvana, and many pieces of literature to guide one there.

truths in a story with understandable insight into the path of enlightenment. would recommend for seekers but is an adjunct in my opinion not a stand alone guide.