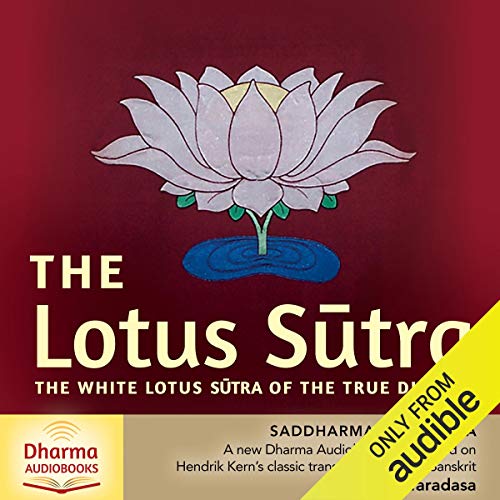 By: Hendrik Kern,Nicolas Soames - translator
Narrated by: Taradasa
Try for £0.00

The Lotus Sūtra is one of the most important Mahāyāna texts and the most widely read, chanted and revered, particularly in Asian Buddhist countries, notably China and Japan. It is the root text, so to speak, of the ‘Pure Land’ schools, which often regard it as the principal Buddhist sutra, the study and practice of which projects the participant along the path to nirvana. It is certainly a remarkable document, replete with the Mahāyāna characteristics of fantastical images, extraordinary appearances, magical happenings, views of time and space which are galactic in size and pronouncements which are definite, unequivocal, practical in some areas and dependent upon a faith commitment in others.

First and foremost, it proclaims the one yāna or vehicle of the Mahāyāna teaching as preeminent over other teachings, especially those following the paths of the śravakayāna (the hearers - the bhikshus) and the pratyekabuddhas (those attaining enlightenment through a solitary path) but also the lay men and lay women. These are the ‘four classes of assembly’ who, according the Lotus Sūtra, have been following the ‘preliminary’ teachings presented by the Buddha Śakyamuni as an ‘expedient’ (skilful means).

The Lotus Sūtra sees the Buddha, teaching from the Gridhrakuta, the Vulture Peak, the full teaching of the Mahāyāna which leads unerringly (if over aeons in larger numbers than the sands of the Ganges!) to nirvāna. Contained within the 27 chapters are many of the principal Buddhist teachings seen in all the schools across the world: the four noble truths, the 12 nidāna chain, the six paramitās or perfections; again and again the qualities of mindfulness, diligence, patience and spiritual vigour or energy are propounded - without these, nirvāna is not attainable.

In short, the path to enlightenment is not for the faint-hearted. Around these core teachings are magical stories of numerous Buddhas from different time eras appearing to support the teaching of Śakyamuni; bodhisattvas appearing from cracks in the ground; the Buddha Prabhūtaratna, a Buddha of the far past, appearing in a jewelled stūpa; celestial chariots flitting around the sky; and the familiar bodhisattvas of Manjuśri, Maitreya, Bhaishajyarāja and many others all have a place in this ultimate cosmic drama.

The Lotus Sūtra is an extraordinary vision, far from the more practical, straightforward texts of the Pāli Canon. For those not accustomed to extreme Mahāyāna images it can appear very strange indeed. But for those prepared to go with it, it is remarkably absorbing, with a particular charisma and, without belittling it, even charm.

That said, it has not been without controversy in the Pure Land tradition, and its often-repeated insistence on its efficacy by some practitioners over the years has occasionally led it into controversial areas.

Nevertheless, it is a pinnacle of world Buddhist literature. The Lotus Sūtra was originally a Sanskrit text, Saddharma Pundarīka, which is translated variously - here, it is The White Lotus Sūtra of the True Dharma, though it is generally known by its short version.

Its popularity in the East is based on a fifth-century translation by the respected Chinese translator Kumarājīva, and most of the recent English translations have come from this Chinese source. However, the first Western translations (from a Sanskrit text originating from Nepal) were by Eugène Burnouf into French in the 1852; and then, using the same source, by the Dutch translator Hendrik Kern into English in 1884.

It is this Kern translation, largely still accepted as sound, that has provided the basis for this Dharma Audiobooks rendering. We have felt free to modernise the 19th-century language and clarified some of the technical terms, using words more current in 21st-century Buddhist circles; also, where Kern - not a practising Buddhist - seems to have been unclear about views or practices, these have been modernised.

What listeners say about The Lotus Sutra

Perfect as it is.

This sutra is perhaps one of the most important if not the MOST important sutre of the Mahayana fail hiya canon. The reason? The point of Buddhadharma is the effect.

The narrator is also perfect as he is. Why! Because he enunciated and with great care and exactitudw with a pleasing sound and cadence that pays respect to the words enunciated.

Sooo repetitive that it becomes a mantra

So many enumerations, names long enough to form sentences that come and go without us learning anything about them. Definetely not for those who wish initiate themselves to Buddhism.

I prefer some other narrators.
this review is more about my preference
some content could and maybe should be removed
if you listen to this you will hear the endless fluff and repetition of unnecessary things they have very little to no value what the Dharma is here to teach

I prefer the abbreviated versions. the scary the wisdom the understanding and the actual teachings without all the fillers