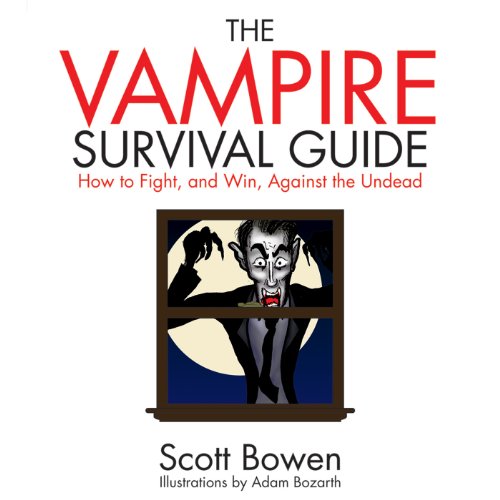 How to Fight and Win Against the Undead
By: Scott Bowen
Narrated by: Ellen Archer
Length: 6 hrs and 4 mins
Categories: Teen & Young Adult, Literature & Fiction
5.0 out of 5 stars 5.0 (1 rating)

The undead are now among us, and this book is your guide to fighting back. In practical yet somehow sultry tones, performer Ellen Archer dispenses Scott Bowen's hard-earned advice about how to protect yourself during the vampire uprising. The Vampire Survival Guide includes important tips on getting to know your local vampire, what to do if a loved one becomes a vampire, the proper care and handling of a dead vampire, vampire housing, celebrity vampires, political vampires, and most importantly, proven vampire killing techniques. You can choose not to listen, but you do so at your own peril.

Vampires have walked among us for thousands of years. These reanimated corpses survive by draining and consuming the blood of the living, and their threat to humanity cannot be ignored. Throughout the centuries, professors and peasants have offered their own vampire-fighting tips, but these were often old wives' tales, based more on superstition than on fact. Here, for the first time, is a comprehensive vampire-fighting guide for the 21st century.

In the tradition of bestsellers like The Zombie Survival Guide and The Zen of Zombie, The Vampire Survival Guide covers everything you need to know to protect yourself from vampires. Topics include the habits and routines of vampires, how to tell if somebody you know has become a vampire, how to protect yourself from attack, how to set traps, what to do if you must fight off multiple vampires, how to cleanse an entire town after devastating vampiric attacks, and much more. It confronts head-on the most terrifying situation of all - that of being bitten by a vampire - by providing the listener with numerous approaches, rooted in both science and medicine and religion, for fighting off blood-suckers before it is too late.

Vampires are found in every country in the world - not just in Eastern Europe and Sunnydale, California. With the human population expected to reach over 9 billion by the year 2050, confrontations between men, women, children, and vampires are increasingly inevitable. This guide is the human race's best hope.

What listeners say about The Vampire Survival Guide