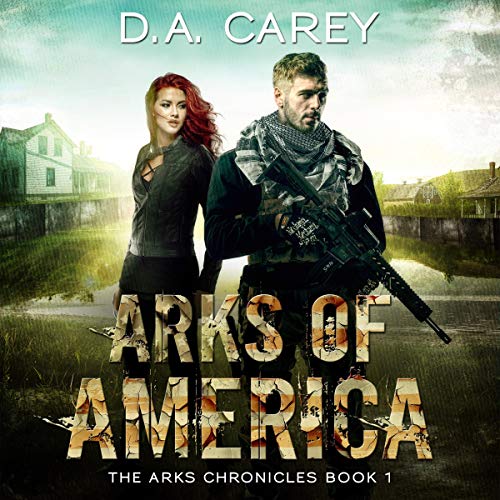 By: D. A. Carey
Narrated by: Michael Driggs

With the country slowly descending into chaos, a visionary leader takes action. Dave Cavanaugh, a silver-haired outdoorsman, mountain hiker, and billionaire, dubbed the “Richard Branson of the Rockies”, sets in motion a plan to construct walled, gated communities across the country to preserve art, science, medicine, and religion - designed to be islands of calm in a sea of chaos. Much like Noah built an ark before the great flood, Dave intends to build a series of land-based arks before the country completely drowns in chaos. Arks of America.

Vince Cavanaugh, Dave’s nephew, a gruff ex-Special Forces soldier, is urged to take an active role in the project. Liz Pendleton, a beautiful auburn-haired actress from Kentucky now living in Hollywood, is one of the initial investors in the program. With alternating periods of violence and peace becoming the norm, eventually the periods of chaos get longer and don’t subside.

Where will the violence strike next? Who will be caught up in it? Will Dave Cavanaugh’s grand plan be enough and in time?

I really enjoyed this book and found the story and narrator to be excellent. I hope the author has plans to make this book the first in a long series. Although I have around 400 audio books this is the first one I’ve written a review about and will attempt to share what I think will be points of importance to potential readers without being long winded or giving away spoilers.

Although I have many books from this genre with varying degrees of plausibility, as an Iraq war vet and history teacher I believe there is much about this book that rings true. The story brings up some key examples of how nations have a life cycle and the advantages that students of history have in their ability to foresee when periods of transition are approaching. In particular the author references the Roman withdrawal from Britain to make this point. If you enjoy historical fiction, the “Camulod Chronicles” by Jack Whyte does a great job of giving a detailed description of the process a group of Britains use to create a community similar to the “Arch” communities in this book.

I think the aspect I find most relevant for our time is the way the author develops the concept of communities that are capable of adapting aspects of self reliance that are practical, sustainable and even profitable regardless of whether or not there is a societal collapse. Other points the author makes that I feel are right on target are; the need for there to be multiple communities that can support each other and take advantage of economic benefits similar to those utilized by corporate franchises or cooperative organizations, the ability of individual communities to alter some aspects of governance to better meet specific needs while staying with in the overall framework adapted by all the communities and finally, the need to gain buy in from people across the political, socio-economic, and vocational spectrum.

Unfortunately for most of us our understanding of self sufficient communities are limited to either a glancing knowledge of groups like the Amish or communes which may be considered extremist or crack-pot groups. (Waco and Ruby Ridge come to mind). As a result, I think most individuals or groups are deterred for forming self reliant communities due to fear of being mislabeled or of attracting negative attention from agencies such as the ATF.

I found the author’s references to high level government leaders and agencies such as Homeland Security to be consistent in whole or part with views most Americans express today. Concerns about the potential obstacles these elements can bring to bear as well as those listed above may explain why we have not seen any large scale efforts to organize a network such as the one author discribes. However despite these concerns and many others, I think the scenario described by the author would most likely succeed. Who knows, maybe there is a similar network and I’m just out of the loop!:-)

That being said, if a benefactor such as the one in the book were to come forward with a such a plan I believe I would be very tempted to invest! Perhaps the popularity of this book will inspire an individual with a similar level prowess and means to step forward and make such a concept a reality.

I hope you enjoy the read and find the story as thought provoking as I did.

Looking forward to the Next Book in the Series

Having listened to over 500 dystopian audiobooks, I must say D.A Carey has done an outstanding job with this book. The storyline has some new twists when compared to other "end of the world as we know it" compilations. You get a much better feel of the locations visited in the progression of the story. And there is an evolution with the characters, they improve as the story unfolds. I am looking forward to the second book and will be downloading it as soon as it becomes available!

I have read over 50 post apocalyptic books in the last five years. This is by far the best. Live the plot and characters. I’m hooked.

I did not get past the first hour. No research into character development. an actress ,a billionaire and a body guard NONE of which any research went into how they think , talk or relate to the world . Total fantasy . The end for me was a firefight in which the author is discussing characteristics of his favorite weapon with a principal whose body guards are trying to protect during the fight , there was no fear , no emotion. I guess I got spoiled reading Joshua Guyua series where a firefight was so real it was like it had just happened. Heart pounding , mouth dry and sweat. Only laughter and kicking myself for buying this . Don't waste your money.

Firstly I liked the length of the story. It is annoying how authors will deliberately chop a story into additional instalments. They should adopt the prepper analogy of 3 instalments sb 2 & 2 sb 1.
Solid fun story with couple enjoyable twists. Recommend to author to go against type in future endeavours and have women shed normalcy bias as fast or faster than male characters. Liz was annoying and not at all a strong female despite authors intentions.
Bottom line: worth the money and read time. But it.

great story.... I liked that it parallels the things that are happening today in real life. I also liked that I can follow the characters journey on the map from my phone or computer. I am a bit of a prepper so I felt like I could relate to the concept of being prepared for anything and living in a place that is self sustaining. The only problem I had was that it seems the only people that could afford to invest would have a safe place during civil unrest or end times, the only people allowed in the charter towns would be the rich or family and friends of David, he mentions that he wants people from all walks of life to live there but doesn't explain how a hard working low income family could get the chance to live in the safety of this community. I know poor people aren't as interesting and the rich but maybe it will be explained in the next book? this is a good story and worth the credit. I would also recommend to a friend, because it does have good ideas on survival.

Not The Post-Apocalyptic Adventure That I Expected

The story was at times written in third person omniscient and seemed to even be boring the narrator. There were many times when I had to stop listening to it due to the frustratingly boring sections. There was very little voice characterization changes and it was sometimes difficult to tell which character was talking. I was extremely happy when the book came to an end!

I found it hard to get to know the characters and the narration was very monotone. I struggled tuning out quite often and had to go back and relisten to understand what was happening. I think the concept was great but the story just kind of seemed flat.

What a fantastic book. Character were lovable.

This book has it all. Great character, believable scenario and lots of action. Michael Driggs voice was superb. I cant wait to listen to the next book in the series. D.A. Carey keep the great books rolling please!!!!