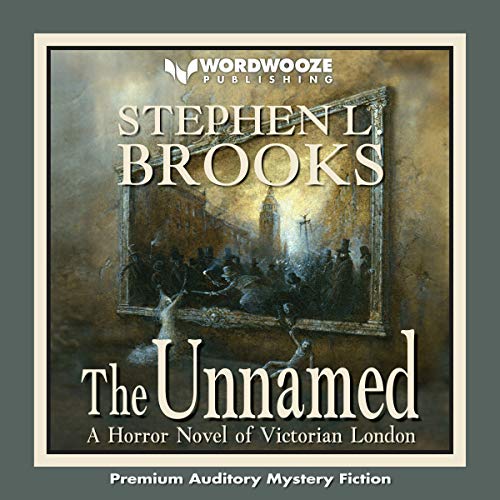 By: Stephen L. Brooks
Narrated by: Alex Lancer
Try for £0.00

Victorian London. A foggy night. A dead body. The beginning of unimaginable horror to come!

Victorian London night: A lamplighter discovers the body of a very old man lying dead in an alley. Scotland Yard calls in the eminent physician Dr. Conan to determine the cause of death. The brilliant and opinionated Conan is often consulted by Scotland Yard. But his sometimes unorthodox solutions frequently have him butting heads with incredulous Yard officials. Despite the man's apparent age, Dr. Conan determines that the victim is no older than 30 and died as the result of rapid aging.

Together with his younger assistant Dr. Archibald “Archie” Hastings and Hastings' woman friend, the enigmatic, independent Gwyneth Rogers, the three begin an investigation that will carry them from the glittering mansions of the wealthy to the squalid hovels of the poor to the darkest heart of Victorian England. What they find will lie far beyond the boundaries of science and medicine and bring them face-to-face with terrors believed by the average Victorian to belong exclusively to the realms of myth and fiction.

The Unnamed is a dazzling, original, brilliant, and unusual horror novel by a rising star of popular fiction. No one who loves an enthralling and original story well-told should miss this Steve Brooks masterpiece of terror in the London fog during the days of hansom cabs and gas light.

What listeners say about The Unnamed

Not for me, but maybe for you.

I found this far too difficult to listen to for 2 reasons. First, the narration just didn't have the power to pull me in to the story. Secondly, though the author does state that little or no knowledge of England was used in the writing of the story, the feel was too off kilter for me, perhaps due to the fact that I am an English woman.

Maybe then, this book is more suited to those without a prior understanding of England and English folk.

I loved this book, after getting my head around how posh the narrator spoke this is a great book, a good story well told, Yes, it has a horror tag but i think it's the funniest horror story i've ever read. The Characters are excellent with a touch of humour built in, Conan, Hastings and Rogers, all names found in other very popular crime stories with a touch of mythology built in as well, an all round superb book IMPO. Highly recommended, would give it 10 stars if that were possible.

I did enjoy the book and narration. That genre is not usually what I enjoy but it is well written book especially if you like that kind of thing

Living in the UK I have grown up with period crime dramas and have enjoyed everything from Sherlock Holmes to Ripper Street and this book sounded right up my (dark) alley.

I begins with a foreward by the author announcing his having never been to England and how his knowledge of London (Victorian or otherwise) being derived from literature. Given how he has successfully nailed it I admit I am pleasantly surprised by this fact!

While Arthur Conan Doyle's stories all have an underlying mystery of the paranormal but never take a step over the line, this story leaps over the line right from the onset with the death of a man via rapid ageing.

The story is well paced with interesting characters, many of whom have their own vices which is a staple of many such Victorian-era novelisations and this helped to add a great sense of excitement to the tale.

About a third of the way through the 6 hour book, the name of a possible suspect is given and the choice of name was, in my opinion, bad. It's akin to calling a Vampire Dracula or a Scientist Dr Jekyll and totally destroyed any sense of building tension or mystery and, from that moment onwards, it became a matter of waiting for the inevitable end as all perceived suspense was lost.

This decision was a real shame as until that moment I was really enjoying the story and was very interested in the interaction between the characters but I believe that for some who may not recognise historical names it could still be a fantastic read.

For me, I won't be revisiting this book but I will certainly be watching for another book in the same vein by Stephen L Brooks and equally will be checking our more of Alex Lancer's narration as he does a fantastic job of narrating all roles in the story, both male and female.

A good old fashion Gothic Horror story, The narrator with his posh British accent really added to the mood of the book. The characters all likeable and clever and the story moved along at a nice pace, I hope this is the first in a series as I am sad that it is over.

If you are a fan of Victorian horror stories, Jack the Ripper, or Sherlock Holmes-type detectives, you will enjoy this story. Bodies of old men are turning up throughout Victorian London on the heels of the Jack the Ripper murders. Doctor Conan and his assistant, Dr. Hastings are called in as Coroners to determine the identity of the victims and the cause of death. However, there is more to these murders than Scotland Yard first thought.

I enjoyed Mr. Brooks' allusions to Sherlock Holmes without being overly obvious about it. Even the name of Dr. Conan is a nod to the esteemed detective. I liked the supernatural aspect to the book, but would have liked a little more description of the creature responsible for the murders. Mr. Brooks did a good job in creating the dark, eerie aspect to the tale and the simpler times of the era.

The narrator, Alex Lancer, did a great job with his performance and added a lot to my listening enjoyment. All in all, this was a fun book to read and I would recommend it to anyone who enjoys Holmes-type stories. Even though it is labeled as "horror", there is nothing graphic or overt about the story. I was given a chance to listen to the audiobook version of this book by the publisher and chose to review it.

I really enjoyed this audible.
The story was very good.
The narrator brought the story to life.

I was happy with some parts and left unsatisfied with the ending. I wanted something more definitive. I enjoyed the chase and mild romance. I voluntarily listened to a free copy of this and am giving an honest review. The narrator was good.

This is a very well written tale that is expertly narrated. I thoroughly enjoyed it.

very entertaining and narrator is perfect for the story. even though I question the biblical accuracy of Lilith, it was a fun use of her assumed persona.