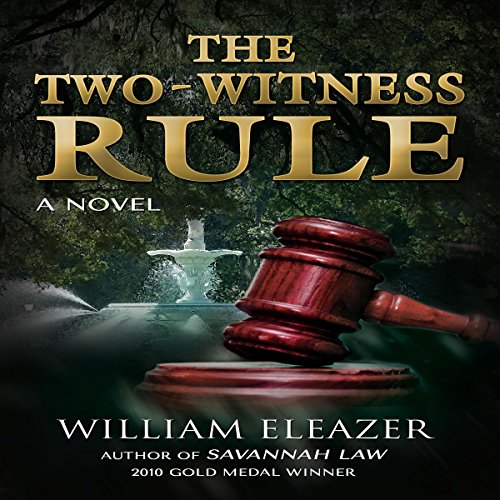 By: William Eleazer
Narrated by: Bob Johnson
Try for £0.00

Assistant District Attorney Scott Marino has been assigned a tough case: the prosecution of Max Gordon, one of the nation's most prominent and successful defense attorneys, who was accused of paying witnesses to commit perjury in a Savannah criminal trial.

Some crimes are just different. Murder is the most serious crime committed on an individual, but perjury is the most dangerous to the criminal justice system. While one witness is legally sufficient to prove murder, for perjury, the two-witness rule applies. But the young prosecutor is challenged by more than this unique rule. He must prosecute a cunning lawyer who is defended by another just as crafty. He wants this dishonest attorney disbarred and put away for 10 years. With the stakes so high, Marino faces threats to both his integrity and his life as he prepares for the biggest trial of his young career.

This is the third novel by William Eleazer. All of his novels - Savannah Law, The Indictments, and now, The Two-Witness Rule - share the same locale: beautiful and quaint Savannah, Georgia.

What listeners say about The Two-Witness Rule

Oh man, you are in for a trip.

Continuing the career of Scott Marino, now an Assistant District Attorney in Savannah and about to embark on the prosecution of his old nemesis, professor and still practising reference attorney, Max Gordon. Gordon stood charged with committing perjury and bribery of witnesses in an earlier case in which Scott was involved. The dislike of the other ran both ways: Scott blamed Gordon for the death of an innocent girl shot whilst having a celebratory meal with her parents, whilst Gordon will stop at nothing to get Scott removed from his case.

This is a legal thriller, with the full excitement of the preparation and execution of the trial. But, like the earlier books by William Released, explores the people surrounding it, and their day to day lives, including frequent visits to the Library Bar and Grill, and the flurry of quick jokes constantly offered up by Uri, the bartender. It is this tapestry of interaction which makes these books so special.

Once again, Bob Johnson reads at a gentle pace, fitting his narration to the pace of the story. He is calm, almost soothing, as he negotiates the problems and crises which occur and he helps bring each of the characters to life with individual voicings.

This is a completely stand alone story but is enhanced if the predecessors, Savannah Law and the Indictments, have been read as fuller acquaintance with the characters does provide a deeper understanding of their personal motivations. My deep thanks to the rights holder who, at my request, gifted me a complimentary copy of the Two Witness Rule, via Audiobook Boom. I very much enjoy these books, and the outsider's peek into the small community in which they are set. Definitely recommended for all who enjoy legal thrillers.

Would you try another book from William Eleazer and/or Bob Johnson?

I would! I enjoyed the plot. I liked the characters.

Not really. I felt part of the plot moved too fast, while other aspects were a bit slow. It didn't keep me guessing, but I did the story line

What aspect of Bob Johnson’s performance would you have changed?

I had to get use to Mr. Johnson's cadence. At first, I had difficulty telling the difference between him reading the plot versus when a character was talking. Once I figured out how he spoke, it was all good & I had no issues.

Do you think The Two-Witness Rule needs a follow-up book? Why or why not?

I do. There were some unanswered questions. I believe this book is in a series. I did not listen to the other books first. I am going to. I will also be looking for any future books with these characters.

Overall, it was good. Not the best I've listened to, but good. I would recommend it. It was really a nice & easy book.

I was provided this auto book at no charge by the narrator in exchange for an unbiased review via Audioboom.com.

William Eleazer is a new author for me as is the narrator, Bob Johnson. The story takes place in Savannah, Georgia. Our protagonist is Assistant District Attorney Scott Marino. He is trying a well-known defense attorney for witness tampering. They want Marino off the case. They frame him for a crime so the DA will remove him.

The book is well written. The story grabbed my attention immediately. The next thing I knew it is one a.m. I could hardly put the book down. The characters are interesting and well developed. Enjoyed the courtroom action. I understand this is Eleazer’s third book. I will go now go back and read his other two books.

The book is seven hours long. Bob Johnson does a good job narrating the book. Johnson is a voice artist and audiobook narrator.

I loved Savannah Law and did not know about the follow up book “The Indictments” I would have loved to read it before reading the “Two Witness Rule “. This book however can be read as a standalone and has continued the story line of assistant DA Scott Marino. Scott prosecutes defense lawyer Max Gordon, whom he had gone up against in “Savanah Law” Max is charged with paying off witnesses to commit perjury and influencing witnesses.

The Two-Witness Rule is once again set Savannah Georgia. I listened to the audio book version and once again enjoyed the narration and story line.
I was given this free review copy audiobook at my request and have voluntarily left this review.

A good, solid thriller which focuses on the rules of law and evidence. All attorneys (especially prosecutors!) need to reinforce the notion that "reasonable doubt" includes the word "reasonable"--"plausible" might be another word to consider as a juror. Does the theory presented (by either side) make any sense? That, and there is a need for the prosecutor to connect the dots clearly. Not all jurors are especially well-educated or thoughtful or knowledgeable or sensible. Sorry for the rant but I've seen the results of less than stellar prosecution, explanations, and "proof" in real life and Art in this case imitates Life-- this very much pertains to the case in question. But you'll have to read for yourself to find out why and how.

I had the pleasure of listening (AUDIO) to this story and found the characters compellingly written, and well-voiced by narrator Bob Johnson who also asked that I share the following disclaimer: "I was provided this audio book at no charge by the narrator in exchange for an unbiased review via AudiobookBoom dot com."

Intriguing story that kept me interested all the way through. Great narration!


I was given this free review copy audiobook at my request and have voluntarily left this review. The fact that I was gifted this book had no influence over my opinion of it

Good, but a little slow

Yes, because I like the stories and the characters.

Would you be willing to try another book from William Eleazer? Why or why not?

Yes, because I like the theme of the books

Have you listened to any of Bob Johnson’s other performances before? How does this one compare?

Once. Great stuff and I would continue to listen.

Do you think The Two-Witness Rule needs a follow-up book? Why or why not?

Yes, there should be a series.

I really enjoyed listening to this original book! The author did great with the various twists and highlighting how some lawyers do despicable maneuvers around the law. I thought the narrator did great with his performance and added much to the book. The suspense was great in this story. I requested this review copy audiobook and have voluntarily written this review. I have listened to several books by both this author and narrator and enjoy their style and will continue to listen to more of their works.

I love the tension of a good legal thriller. Eleazer holds your attention throughout!

Bob Johnson did an excellent job bringing the characters to life.

this book intrigued me long time ago, I heard it now in audio and I'm glad I did it .
it is a very complex book.... so much elements to remember .you have to hear it while you alone and nobody bothers you.
I liked the cases very much... I don't have much to say about this book because everything I will say will be a spoiler or something that will confuse you.. I think if you like complicated and complex books this is the one for you it's not a simple book but very enjoyable
the narrator was nice I liked his voice

This is a continuation of the story begun in the previous books in this series. Again, it's very much a character-driven legal suspense story with much courtroom drama and a twist at the end that may surprise you. Unfortunately, it ended rather abruptly with a few loose ends, although it's not quite a cliffhanger.

I've come to appreciate Bob Johnson's narration of this series. He gives distinctive and appropriate voices to the characters and seems to have made this series his own.