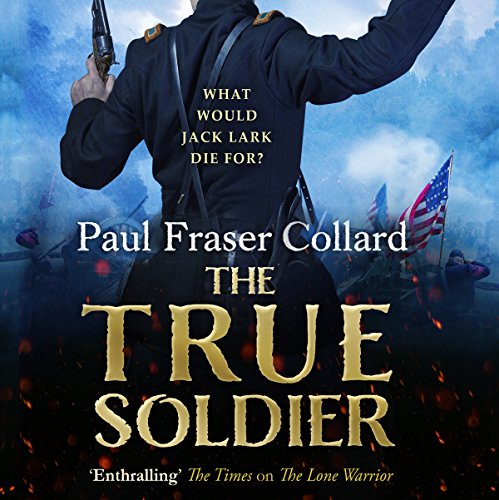 Roguish hero Jack Lark - dubbed 'Sharpe meets the Talented Mr Ripley' - travels to America to reinvent himself as the American Civil War looms.... A must-listen for fans of Bernard Cornwell and Simon Scarrow.

'This ain't the kind of war you are used to. It's brother against brother, countryman against countryman.'

A hardened soldier, Jack has always gone where he was ordered to go - and killed the enemy he was ordered to kill. But when he becomes a sergeant for the Union army, he realises that this conflict between North and South is different. Men are choosing to fight - and die - for a cause they believe in.

The people of Boston think it will take just one, great battle. But, with years of experience, Jack knows better. This is the beginning of something that will tear a country apart - and force Jack to see what he is truly fighting for.

No Larking about with Jack

Brilliant story and tremendously read.
Loved the pace of the book with Jack Karl at his heroic best.

Brilliant. Full of detailed description. The story and narrations put you on the battlefield. If you like Sharpe, then these books are for you.

Not the best of the series

Huge fan of the Jack Lark series. Found this book to be very slow indeed compared to others. Great performance by narrator

He writes so well about the terrors of war, fighting - comradeship that it's hard to mark the book down but, unfortunately, once off his natural path however, is where things start to go wrong. The heroine in this book is, apparently, beautiful - but, oh, how many times do we have to hear it??? Once into the realms of relationships, women and sex it all gets just so tedious and unrealistic. Needs an editor to crack the whip. Apart from that his books are usually a good read.

If you could sum up The True Soldier in three words, what would they be?

Which character – as performed by Dudley Hinton – was your favorite?

Yes, It was that good I am a truck driver and couldn't do one long session but I burned thru it pretty fast