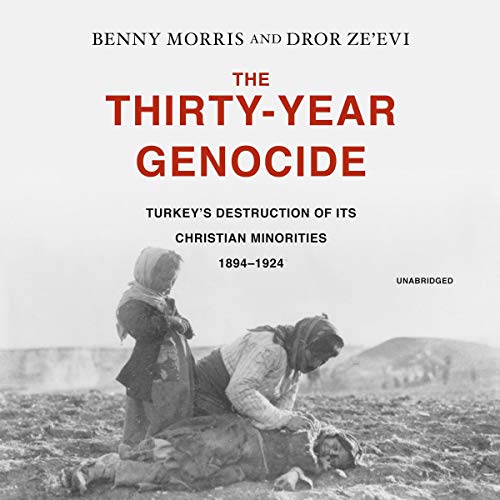 Between 1894 and 1924, three waves of violence swept across Anatolia, targeting the region's Christian minorities, who had previously accounted for 20 percent of the population. By 1924 the Armenians, Assyrians, and Greeks had been reduced to two percent. Most historians have treated these waves as distinct, isolated events, and successive Turkish governments presented them as an unfortunate sequence of accidents. The Thirty-Year Genocide is the first account to show that the three were actually part of a single, continuing, and intentional effort to wipe out Anatolia's Christian population.

The years in question, the most violent in the recent history of the region, began during the reign of the Ottoman sultan Abdulhamid II, continued under the Young Turks, and ended during the first years of the Turkish Republic founded by Ataturk. Yet despite the dramatic swing from the Islamizing autocracy of the sultan to the secularizing republicanism of the post-World War I period, the nation's annihilationist policies were remarkably constant, with continual recourse to premeditated mass killing, homicidal deportation, forced conversion, mass rape, and brutal abduction. And one thing more was a constant: the rallying cry of jihad. While not justified under the teachings of Islam, the killing of two million Christians was effected through the calculated exhortation of the Turks to create a pure Muslim nation.

Revelatory and impeccably researched, Benny Morris and Dror Ze'evi's account is certain to transform how we see one of modern history's most horrific events.

What listeners say about The Thirty-Year Genocide

Don't get distracted or you'll lose your place. The Armenian genocide was one of the most horrifying, terrifying events in history. The absolute near annihilation of Christian minorities in Turkey from 1894-1924 is so egregious it's hard to truly quantify. And it was largely covered up or minimized. Today, it is one of the forgotten atrocities. The Turks had a plan for Armenian genocide, but the exact plan was more-less secret, as documents have yet to be found that outlay the plan for genocide. However, with deportations and outright massacres, genocide was obviously the goal.

The authors did a most incredible job with this book, in it's breadth and detail. They report the atrocities with no bias, but with clear intent to show that a true Christian genocide did occur and with intent. The book is very dense and if one doesn't pay close attention, it's easy to have no idea what's going on. Stefan Rudnicki is in his element here. He's a most wonderful narrator for history books, especially one like this. He was the perfect choice. I cannot recommend this work highly enough! What a stunning achievement.

This audiobook provides an authoritative account of the three decades of ethnic and religious violence that plagued Anatolia and surrounding areas. The authors present the best known Armenian genocide of 1915-16 in the context of large anti Christian violence against Greeks and Assyrians, and the earlier 1894-96 and later 1919-1923 mass killings, forced conversions, rapes, and delortations As the length and subject should make obvious, this narrative will not be a simple read/listen, and the grim subject matter can leave you glum or angry, since there are so many horrors described within. That point is not a criticism, but speaks to the talent of the reader and the thoroughness of the authors.

There isn’t much historical documentation on the Armenians of Turkey and what happened to them.
I know now and it’s worse than I could imagine.
If this would be taught in school about historical Muslim Genocide occurrences of non Muslims populations so a Caliphate could be created; we would not have been so shocked by the activities of ISIS.

I give the highest recommendation for this book as not only it covers vital piece of human history, but the authors rely solely on primary source evidence which they read in several languages over a decade long period. While that may sound like a book so loaded with detail it becomes a snoozer, this book is loaded with details of the horrors of war, persecutions, and genocide throughout. While I don't agree with all of the author's conclusions, the scholarly work done here should be considered vital historiography.

The book is a detailed recounting of the terrible events between 1894 and 1924 that lead to the destruction of the Armenian, Greek, and Assyrian Christian communities in Anatolia. It is a story of almost endless horror with few bright spots. Nevertheless it’s very important that people know what was done and by whom.

My American family and I lived in Yalova Turkey between Bursa and Istanbul, in the early 1970’s. My father was stationed there as part of the US Air Force and NATO while I was in elementary school. We lived in a Turkish village and I went to an American school though did have a Turkish “Host Nation” teacher provided by the Turkish government who mostly taught us about benevolent Ataturk and the wonderful secular modern Turkish Republic. I loved turkey, I loved Ataturk, and I loved the kind Turks and have been back many time. As I got older I did hear about those poor Armenians in far eastern Anatolia but I never knew the genocide(s) occurred throughout the entire country. In hindsight though, I could have known. In the early 1970’s the countryside and villages around where we lived and even urban Istanbul and Bursa had a sense of abandonment in areas. I realize now that we were seeing a world scared by having “lost”twenty to thirty percent of its population just 45 years before we arrived. For fifty years I felt proud of my association with modern, progressive, secular, hospitable Turkey then I started learning the undeniable ugly truth. Sad and Humbling.

I appreciate the careful telling of what happened to minority groups under Ottoman Turkish rule between 1894 and 1924. I am also grateful for the last chapter, wherein the authors compare the Turk-generated genocide to Adolf Hitler's treatment of Jews and other minorities in the 1940s. The "golden voice" of Stefan Rudnicki was pleasant to the ear!

Some Turkish words are mispronounced. Some truly very badly. A Turkish speaker would have done a better job.
The body of work is excellent.

Part of history needed to be told again.

This study of what happened to the Christians from 1894 to 1924 during the Ottomans empires last years, the young Turks and Ataturk, is remarkably in its detail, while at the same time revealing the devastating scope and horror of the Genocide.

Make no mistake this was a genocide, and one of the most devastating the World has seen.

The perpetrators were motivated primarily by religious fervor and secondarily by fear of loss of territory and desire for gain of property.

The perpetrators were predominantly Muslim Turks aided by then allied Kurds. The victims were Armenians, Assyrians and Greeks.

Obviously there were atrocities by the ultimate victims against the perpetrators, who would not want to defend themselves, but except for a misguided attempt by Greeks between 1919 and 1923 to gain territory in western Anatolia, Turkish attempts to blame others is completely unjustified. Even then, what Turks eventually did to the Greek population in Anatolia is not proportional to what Greeks did to Turks.

By not accepting responsibility Turkey effectively is suggesting that the religious animosity and superiority feelings which resulted in these genocidal acts remain prevalent, and certainly the present day behavior of President Erdogan only confirms this.

This book is highly recommended and the authors deserves great appreciation for their 10 years of research into these horrible events.