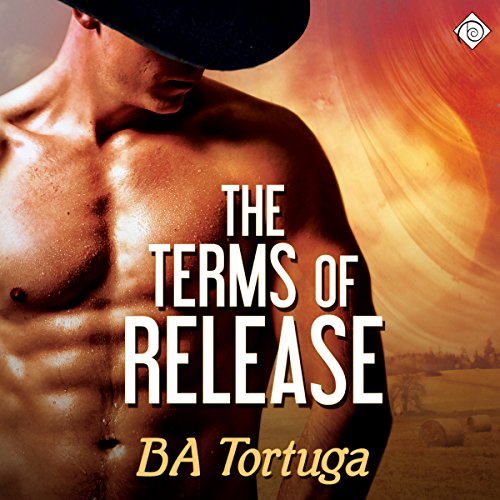 By: BA Tortuga
Narrated by: Slate Anders
Try for £0.00

They say a man can always come home. So after doing hard time, Sage Redding heads to his family's northeast Texas ranch to help his ailing daddy with the cutting horses.

Adam (Win) Winchester is a county deputy and the cousin of one of the men killed in the incident that sent Sage to prison for almost a decade. While Win's uncles, Jim and Teddy, are determined to make Sage and the entire Redding family pay for their loss, Win just figures Sage has paid his dues and maybe needs a friend. Maybe he needs more than a friend. In fact, Win's counting on it.

No one's denying Sage is an ex-con who went to prison for manslaughter. Regardless of the love he has for his father, he's returned knowing things will likely go badly for him. Maybe a man can always come home, but he may not be able to stay.

I took this on holiday and some bits are extra good!! The story is believable and I am a little in love with this couple!

Tragic but a happy ever after.

Shocking things go on for prison inmates and on the outside it still goes on and if it wasn't for family and one man it could have been tragic.

Love Sage so much...

Loved this story when I read it and the narrator did a good job voicing the different characters.

However, my enjoyment was spoilt a little as the sound quality was poor (there was a hissing noise) and sometimes his voice was too soft and I struggled to hear clearly.

What would have made The Terms of Release better?

If you’ve listened to books by BA Tortuga before, how does this one compare?

By trying to voice the characters as John Wayne, Elvis Presley and Carson Kressley.

If you could play editor, what scene or scenes would you have cut from The Terms of Release?

You can always go home, but why would you want to when almost everyone considers you responsible for the death of one of their own? Sage Redding is called home to help his family on their Ranch when his father falls too ill to continue working with the horses. No sooner than he steps off the plane in Texas, the local sheriff makes it clear he has Sage in his sights. A decade spent in prison has not lessened the hate that is simmering in the hearts of the family that feel Sage took something from them.

Deputy Adam Winchester, Win, can understand the pain his family still holds on too, it was his cousin that died, but he doesn’t think Sage is as responsible as he was punished for. Win does his best to keep his family at bay, but Sage is hurt by some people ‘out for justice’ regardless. As the story progress’s so does the relationship between Win and Sage, Win becomes very protective of his lover, but his family doesn’t know when to quit. Add to that mother nature herself in the form of a very pissed off tornado, and the ability to keep Sage safe is literally jerked out of Win’s hands.

I really enjoyed the storyline of the good boy gone bad, supposedly, but in actuality he is protecting the memory of his friend. Sage takes the blame for far more than he is responsible for and through it all, he keeps his dead friends memory clean. And I loved that Sage’s family stood up for him regardless, the controversy behind his conviction, his sexuality, the trouble that follows him everywhere, they just love him and support him.

Alas, there was so much going on within the spines of this story that at times I was confused, and the story itself felt rushed. This could easily have been split into two books with more attention paid to specific details in each installment. There were situations and words used repetitively in abundance which took away from the overall feeling of the story as well.

This was my first audio with Slate Anders and I won’t be rushing to grab another one from him. I don’t know if he thought he was bringing the characters to life by using likenesses of John Wayne, Elvis Presley and Carson Kressley but it did not do this story justice and came across as campy and generic.

I’m torn on this one, I think perhaps I should have read this one and not listened to it, but the overuse of terms and words would still lower my rating. If you like Cowboy Romances though, this story may appeal to you.

This was a really nice surprise as I have never read any of this author's book, but I loved this one. This is the story of Sage, an ex con with self esteem issues, and Win/Adam, a deputy in a small town in Texas with a homophobic boss, who is also his Uncle. I have to say that Adam is my favorite in this story, he is just amazing. He is funny, strong and determined to fight for his man, who is being persecuted in the small town. There is lots of drama and a cast of great supportive family and friends. I had a smile on my face whenever Sage and Win interacted because I just loved them together. Their dialogue was witty and heartfelt. Sage just broke my heart some of the time with not seeing his self worth. The author also doesn't shy away from the harsh reality of life in prison and what it was like for Sage, who went in for 8 years at the age of 18 after being unjustly convicted. That part was hard to listen to, but important to the story.

The narrator does an amazing job. He really brings these characters to life. Totally worth a credit.

This audiobook was good. The characters Adam and Sage were so likable and sweet. I was rooting for them the whole time. The story was emotional but ending with an HEA. I will have to check out other works from the author.

Sage Redding grew up gay in a small town in Texas. That was his first mistake. His second mistake was hooking up with the black sheep of the “ruling family” of this town, Angel. His third mistake was getting so high he couldn’t save himself from the disaster that killed Angel and sent Sage to prison for manslaughter.
Sage serves his time in prison and is out on parole when his father’s illness forces him to return to the town that hates him. Sage, so very good at heart, returns to help his family keep their horse ranch, knowing that he may lose his life trying to do the right thing.
Adam is Angel’s cousin. He hates that part of his family and has always known Sage was only guilty of being young and dumb. When the heat turns up and Sage becomes the victim of town violence, Adam becomes Sage’s protector and lover.
The two face daunting odds but they have some allies in town (including both mothers) and the two are in love. There is a very dramatic ending and a hopeful happily ever after for our boys.

**
The story is beautifully written and an emotional roller coaster. Every time you turn around Sage is getting the s**t beat out of him. Adam tries to help but can only do so much, the threat of returning to prison is big and it’s real since Angel’s dad is the sheriff.
On the one hand I wasn’t sure why in the hell Sage came back. Sure, he doesn’t want to lose the ranch, but realistically, even if he saves it, there’s no way he can expect to keep it. The town is determined to destroy him. And, honestly, what in the world could make losing your life worth it? There doesn’t seem to be any real hope, except leaving and that Sage won’t do.
There is a bit of “insta-love” between Adam and Sage. Seemingly the only gay guys around for miles, conveniently falling for each other, but they do seem well suited for the other. The violence against Sage, all the crap he was given early in life and in prison, begins to tire after awhile, but the point is made – he’s been through hell, he deserves more now.
Adam isn’t as fleshed out as Sage, as far as characters go, but he loves Sage and there is a moment of realistic doubt near the end where he wonders how he can be with someone who was someone’s “b***h” in prison.
The ending, at last, brings about some fairly logical decisions about who should live where, etcetera, which is gratifying, and helps to make the angst tolerable.
Overall it was a good story, with a very touching romance, lots of country charm and flavor and some fairly satisfying hot scenes to round everything out.
I give the story a 3.5 of 5 stars.
Narration:
Slate Anders does a nice job with the narration. He does a few inflections to differentiate the main characters, but nothing over the top. He doesn’t do a lot of “acting” and mostly fades into the background, letting the story tell itself in a way that’s not distracting.
I give the narration a 4 of 5 stars.
Together I would round it up to a 4 of 5 stars, it was a good story done very well, I recommend it to anyone with interest in cowboys, lots of angst/pain/hurt, and anyone with a fondness for quirky country sayings.
Overall Impression:

4 stars – I really liked it

It's a story about a couple more than it is about falling in love. That they do quick.
I loved how they stay together through all of it, without fighting their attraction at all. They just... Get together. And I love it.

The narrator has a great voice, but like with alot of deep voiced voice actors, he has trouble with dialogue, and often can't tell who is who. He pitches higher for the women, but that's that.

Nothing special but not bad

It is not a bad story but it kind of lacks something - i Think the author could have made the story better by expanding On the past of the MCs - as it is its just ok, and you dont really feel like you know Them.

Wasn't aweful, but also not that memorable

The thing about waiting to write reviews is that you are forced to try and remember what the book was about. Turns out, I can't really remember.