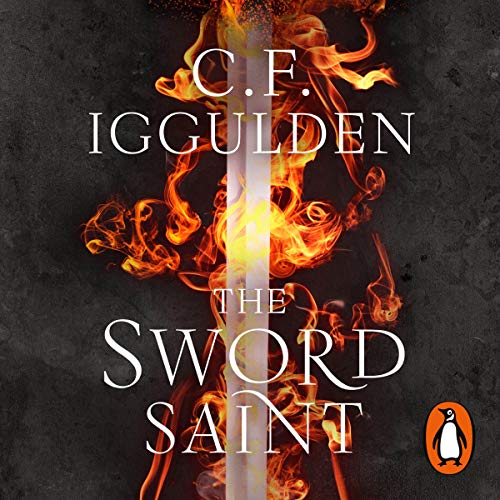 The epic conclusion to the best-selling Empire of Salt series from master storyteller Conn Iggulden.

The news from the north is grim.

An army is massing under the new king of Feal. They head towards Darien - city of the Twelve families - demanding allegiance, or war.

Tellius, Speaker to the Council, knows this divided city will never stand against such a terrible foe.

But Tellius has a plan.

He will assemble a band of heroes. Men and women who once before aided Darien in her time of need.

They will come if he calls.

The trumpets of war sound.

A great city holds its breath.

And a desperate plan unfolds....

What listeners say about The Sword Saint

Conn Iggulden has long been one of my favourite authors from his Caesar and Genghis Khan series, and his first fantasy series is gripping and leaves you wanting more. Please write another one in the series Conn, there's so much more to find out about the Empire of Salt.

The narrator also does a brilliant job and each character is well defined vocally. Thanks both for a great story.

I had this on Audible and was walking around entranced by the plot. Unfortunately I binge-listened so it was over far too soon. Highly recommended

Another great book in the series, well thought out and well read. It leaves itself open for hopefully more books to follow.

if only there was book 4!

Cracking read. I'm blind so books like this are amazing and very important. Think I may start book 1 again.

What a build up th a grand finale ten out of ten.... Top book yes

excellent from one of my favourite authors.

Fast paced and enthralling storyline that grips you from start to finish. A must read trilogy.

a fantastic trilogy, in which you really get to know and love the characters. brilliant

Something a bit different. A good story & well narrated. As with some other books by this author I find the ending a bit sudden with lack of detail.

there is never enough of the books in this series. the writing and performance have left me thoroughly invested in every character (reluctantly in the case of John Deeds) and I cried at "That Bit" on the walls (no spoilers but some concerned Starbucks customers). I want them all to have happy endings (except for Deeds).

Never enough Elias. Ever. And he's so Sean Bean in my head it's not even funny.

Elias and Nancy are the OTP. fight me!

loved every second but somehow felt too short .. I hope there's more to come