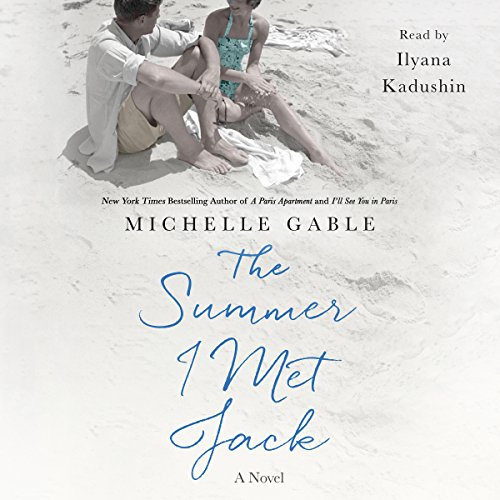 The Summer I Met Jack

By: Michelle Gable
Narrated by: Ilyana Kadushin
Try for £0.00

In this scintillating audiobook from New York Times best-selling author Michelle Gable, listeners are asked to imagine the affair between John F. Kennedy and Alicia Corning Clark - and the child they may have had.

In 1950, a young, beautiful Polish refugee arrives in Hyannisport, Massachusetts, to work as a maid for one of the wealthiest families in America. Alicia is at once dazzled by the large and charismatic family, in particular the oldest son, a rising politician named Jack. Alicia and Jack are soon engaged, but his domineering father forbids the marriage.

And so, Alicia trades Hyannisport for Hollywood and eventually Rome. She dates famous actors and athletes and royalty, including Gary Cooper, Kirk Douglas, and Katharine Hepburn, all the while staying close with Jack. A decade after they meet, on the eve of Jack’s inauguration as the 35th president of the United States, the two must confront what they mean to each other.

The Summer I Met Jack is based on the fascinating real life of Alicia Corning Clark, a woman whom J. Edgar Hoover insisted was paid by the Kennedys to keep quiet about not only her romance with Jack Kennedy but also a baby they may have had together.

What listeners say about The Summer I Met Jack

Camelot It is Not

Would like to know the truth about the rumored “love child” in this family drama but it seems as if this book is a fairy tale. The author goes to great lengths to create a sympathetic main character while demonizing almost everyone with whom she interacts. Would not recommend it.

I so enjoyed the story and the reader. This was such a fascinating story told really well.

Just meh for me.

The story was slow to get to the point. Lost interest several times. Glad I finished but wasn’t my favorite

It's hard for me to read historical fiction about famous people because I want to know what's fact and what's fiction. I've read where the author says that it is all fiction, and I've read where she says that it's all based on facts with fiction in between the facts. I don't know what to think about this book and I don't have time or desire to start searching to know what's real and what's not! 500 pgs should have done that for me!

I love the readers voice and this book was fascinating! Definitely recommending this to others who want to read about JFK theories.

I love this book. It could take you back in time and also break your heart.

Stretches a lackluster story way too far and takes ridiculous liberties with conspiracy theories about the Kennedys. While I did finish it, I was glad to have it done. I wouldn't recommend.