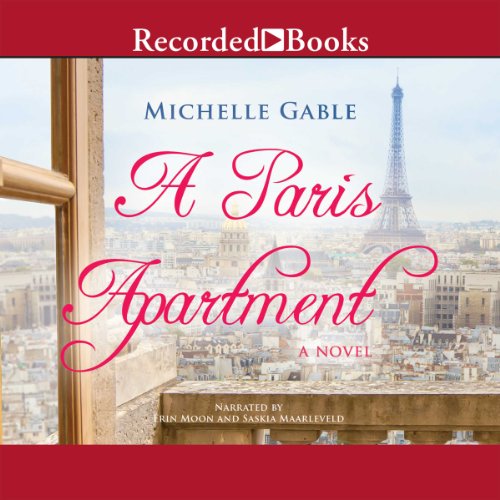 By: Michelle Gable
Narrated by: Erin Moon,Saskia Maarleveld
Try for £0.00

Where Moulin Rouge meets The Paris Wife lies The Paris Apartment, a rich and colorful work by debut author Michelle Gable. When her boss tells her about the discoveries in a cramped, decrepit apartment in the ninth arrondissement, Sotheby' s continental furniture specialist April Vaught does not hear "dust" or "rats" or "shuttered for 70 years". She hears Paris. She hears escape. She cannot board the plane fast enough.

When she arrives, April quickly learns the apartment is more than just some rich hoarder' s repository. Beneath the dust and cobwebs and stale perfumed air is a literal goldmine - and not just in terms of actual dollars. First, there' s a portrait painted by one of the masters of the Belle Epoque. Then there are letters and diaries and a thousand indications the woman who lived there was more than a renowned courtesan with enviable décolletage. Suddenly it's no longer about the bureau plats and Louis-style armchairs that will fetch millions at auction. It' s about a life.

Two lives, actually. With the help of a salty Parisian solicitor and hundreds of private documents, April tries to uncover the secrets buried in the apartment. As she digs her fingers into one woman' s life, April can' t help but take a deeper look into her own. When two things she left bubbling back in the states begin to boil over, the problems she thought she had suddenly look quaint, more ancient than the shuttered flat. April starts to wonder if in this apartment, in this life, she' ll ever find what she' s looking for.

"With its well-developed, memorable characters and the author's skillful transitioning between story lines, finding similarities in the lives of two women decades apart, this stunning and fascinating debut will capture the interest of a wide audience but particularly those interested in stories about women behind famous men like Melanie Benjamin's The Aviator's Wife and Nancy Horan's Under the Wide and Starry Sky. Highly recommended." ( Library Journal)

What listeners say about A Paris Apartment

The story grabs you but the narration is awful

I like the story but the narration is awful, very hard to listed to.

Furthermore, April is a bit helpless and that side of her is what the author drags out actually making April rather unlikable.

Perhaps a different narrator. I found this one grated on my nerves.

The "story" was intriquing. The writing and characters and narration were not.

She tried too hard to be cute.

Like I said, the story was intriguing. Unfortunately, that couldn't carry me through to the end. :)

Wow – I did NOT enjoy this book!

I was in a Paris mood, looking for something “scenic” that would recall memories of past visits to Paris - instead I got drippy, insipid, BORING drivel.

The characters were flat and unbelievable, the plot was uninteresting, the flashbacks were unexciting, the story uninspired… so why did I read on? Because I kept hoping things would improve; how much worse could they get since the book started off on such a low?

The narration was a farce. The French accents were so extremely comically bad, to me it felt like what Americans think French people should sound like (when they are making fun of them!) It was over the top absurdly bad – everyone was a cliché of Clouseau. “Ziss iz zee best place to ave crrrrrroisant! Come ma belle, let us enjoy zee sun. It tiz a bootifool afternoon,non”

This book could possibly be enjoyed by an avid reader of the romance genre, as long as the reader was not looking for anything deep or historically relevant.

What could Michelle Gable have done to make this a more enjoyable book for you?

What didn’t you like about Erin Moon and Saskia Maarleveld ’s performance?

I did not like the voice used to animate the main female character. The voice was too immature given the character's level of seniority within her profession. Using a female voice for the french male character was ridiculous and made him seem like a french caricature.

The premise was fascinating and is what interested me in the first place, however, how the premise was explored was extremely superficial and unsatisfying.

The description sounded so promising! But the story was a great letdown; even the history failed to interest. The characters were unlikeable and boring. And worst of all, the narration was unbearable. It robbed the main character of any chance to be taken seriously and the French accents were probably the worst I've ever heard. I managed to hang on for twenty chapters and then realized I was gritting my teeth the whole time and gave up.

I cannot recommend this book for either the story or the narration.

I really enjoyed the story and way it unfolded, alternating between past and present. However, I found April unlikable , & the reader' snotty, clipped intonation exacerbated that. Te inconsistent French pronunciation (eg "Part Doo, Chapitre Eighteen") and stereotypical supporting characters (overpronouncing Frenchman, teen girls, and surfer brother) had me looking forward to the diary segments.

Engrossing dramatization of an actual event

Although a Francophile, I don't remember hearing about the Paris apartment that had been closed up for 70 years. When I now research that finding, I see that many stories got it wrong. It was not the original owner, Marthe de Florian, who fled the Nazis for southern France around the time of the 2nd World War, but her granddaughter, which is a mystery in itself. This appears to be the best and tidiest accounting of the apartment and the lineage of owners. It also probably speculates as to why the final owner never returned for 70 years prior to her death, but kept paying the rent for all that time. The speculations are quite interesting, and it makes for an engrossing story--especially as it is heavily based on actual events. It seems to have been painstakingly researched to be able to have woven the intricate series of events that lead up to this fabulous find. Almost my only negative comment would be of the very excellent narrator. Especially when narrating the voice of a multi-degreed antiques expert, PLEASE pronounce "jewElry" correctly! (not jew-le-ry).

It’s difficult to know if the story is any good as it’s impossible to follow the narration. The narrator is completely disconnected to the words; randomly emphasizing and elongating their enunciation. I found it so distracting that I had to give up listening. I’m disappointed as I was looking forward to the book. I am, however excited to embark on a new career as a voiceover artist, now knowing anyone can do it.

First, you will not be able to listen to this at normal speed. Change to 1.25 and you will be so happy!

This is a fictional present day story told with true back story flashbacks. The author had to fill in a lot of details on the life of those living in the apartment 100 years ago because few facts are actually known. The story goes back and forth between the fictional Sotheby’s auction expert’s life and Marte, the woman who lived in the apartment in the early 1900’s before WW II.

As long as you go in knowing that this is not a history lesson but a work of fiction with some true facts woven in, I think you might enjoy it!

What would have made A Paris Apartment better?

Less of a "chick-lit" predictable read. The narrator was awful...pronunciation of French words appalling....

Would you ever listen to anything by Michelle Gable again?

I loved the idea of the story. Just didn't like any of the characters. Did not like the narrator, didn't care to listen to the whining. It was a drag to listen. I didn't want to finish.