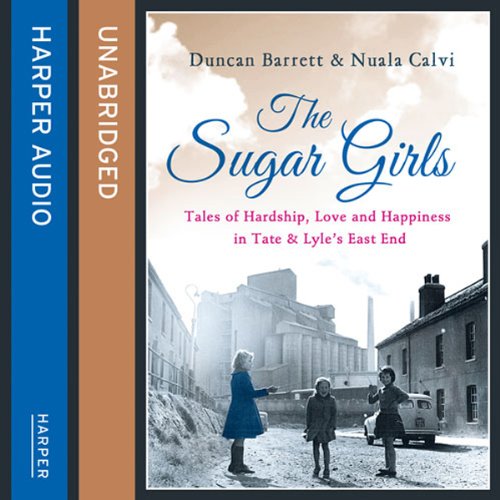 By: Duncan Barrett,Nuala Calvi
Narrated by: Penny McDonald
Try for £0.00

Tales of Hardship, Love and Happiness in Tate & Lyle’s East End Factories. On an autumn day in 1944, Ethel Alleyne walked the short distance from her house to Tate & Lyle’s refinery on the shining curve of the Thames. Looking up at the giant gates, Ethel felt like she had been preparing for this moment all her life. She smoothed down her frizzy hair, scraped a bit of dirt off the corner of her shoe and strode through. She was quite unprepared for the sight that met her eyes …’In the years leading up to and after the Second World War thousands of women left school at fourteen to work in the bustling factories of London’s East End.

Despite long hours, hard and often hazardous work, factory life afforded exciting opportunities for independence, friendship and romance. Of all the factories that lined the docks, it was at Tate and Lyle’s where you could earn the most generous wages and enjoy the best social life, and it was here where The Sugar Girls worked. Through the Blitz and on through the years of rationing The Sugar Girls kept Britain sweet. The work was back-breakingly hard, but Tate & Lyle was more than just a factory, it was a community, a calling, a place of love and support and an uproarious, tribal part of the East End. From young Ethel to love-worn Lillian, irrepressible Gladys to Miss Smith who tries to keep a workforce of flirtatious young men and women on the straight and narrow, this is an evocative, moving story of hunger, hardship and happiness. Tales of adversity, resilience and youthful high spirits are woven together to provide a moving insight into a lost way of life, as well as a timeless testament to the experience of being young and female.

What listeners say about The Sugar Girls

Authentic and true to life escapism

The Sugar Girls transports you, while listening, to what is now a forgotten world. Lots of little incidents from the factory floor and from the 'sugar girls' lives outside the factory pepper this real life account. It is sometimes touching, at other times leaning towards the mind boggling, sometimes colourful and at other times almost bland; making this a true mix of story and facts. The stories of different girls all intertwine and the book flits from girl to girl and back again, making it a challenge to always remember who was who; so at the end I'm left with a vague impression of the whole, as individual characters merge. Although it's a good bit of escapism and has an authentic feel of true life stories, from the past. My only small gripe is that the narrator has a sing song voice making it hard to get into, in spite of this I persevered until I did and made it to the end!

enjoyable nostalgia makes for pleasant listening. easy to get back in the storyline after a break.

Fantastic story.. Totally enjoyed it. I recommend this book to be read and listen too by all ages. Well done to the author of this wonderful story. The performance was beautifully clear all the way through the story. Thank you.

A snapshot of a lifestyle now gone. The individual stories snd characters are lifelike and make you feel as if you have stepped into another time and really experienced their joys snd troubles both at work and in their personal life. I found the details about the running of the factory one of the best parts of the book - so different from the way things are done now.

This story centers around the lives of the girls and women that worked in the sugar plant in London mainly during world war 2. I love it and it fits right in perfectly with the time spans of Call the Midwife. the characters are well developed and you fall in love with them and enjoy reading about their lives and loves. Highly recommend this tale for anyone that loves British history.