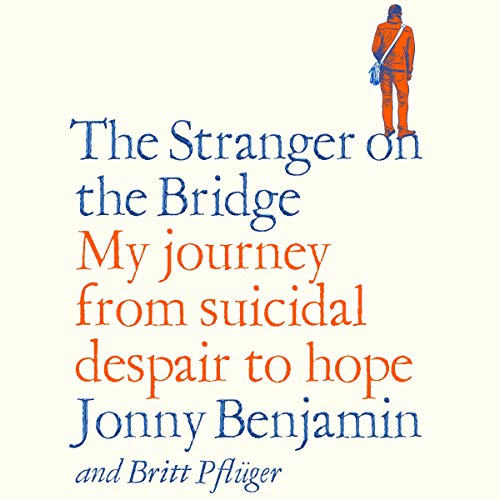 The Stranger on the Bridge

This audiobook contains a bonus interview between Jonny Benjamin and Natasha Devon, author of A Beginner's Guide to Being Mental: An A-Z from Anxiety to Zero F**cks Given.

In 2008, 20-year-old Jonny Benjamin stood on Waterloo Bridge, about to jump. A stranger saw his distress and stopped to talk with him - a decision that saved Jonny's life.

Fast-forward to 2014 and Jonny, together with Rethink Mental Illness, launched a campaign with a short video clip so that Jonny could finally thank that stranger who put him on the path to recovery. More than 319 million people around the world followed the search. ITV's breakfast shows picked up the story until the stranger, whose name is Neil Laybourn, was found, and - in an emotional and touching moment - the pair reunited and have remained firm friends ever since.

The Stranger on the Bridge is a memoir of the journey Jonny made both personally and publicly to not only find the person who saved his life but also to explore how he got to the bridge in the first place and how he continues to manage his diagnosis of schizoaffective disorder. Using extracts from diaries Jonny has been writing from the age of 13, this book is a deeply personal memoir with a unique insight on mental health.

Jonny was recognised for his work as an influential activist changing the culture around mental health when he was awarded an MBE in 2017. He and Neil now work full-time together visiting schools, hospitals, prisons and workplaces to help end the stigma by talking about mental health and suicide prevention. The pair ran the London Marathon together in 2017 in aid of HeadsTogether. Following the global campaign to find the stranger, in 2015 Channel 4 made a documentary of Jonny's search, which has now been shown in 14 territories.

What listeners say about The Stranger on the Bridge

Loved this book, I have learnt so much. Thank you for sharing your life story.

Intense but fascinating insight into Jonny's struggle with his own Mental Health and his incredible ongoing journey. Made all the more real by hearing it in his own voice.

Would happily recommend to anyone.

This showed the variety of circumstances that affect mental health and treatment that is available.

It's about time this awful illness was talked about so many of us suffer and its soul destroying. Hats off to Johnny for bearing his soul and letting the world know how much stigma surrounds mental illness

Hearing Jonny’s story and how he has turned things around, whilst still battling his own personal struggles, is not only inspirational but motivating.
The book is narrated well and brought to life through Jonny’s voice. You can picture yourself in the story through his journey.
Really great to hear both Neil and Britt in this Audible version that helps bring the book together.
One of the best books I’ve ever read (listened to that is).
Looking forward to Jonny & Britt’s next collaboration!

I loved this book, it made me smile and cry and most importantly it made me think about mental health differently. I’ve finished this book rooting for Johnny to continue to do well, being more aware of those around me and what they can be secretly going though and with so much hope.
Thank you Johnny for your openess and honesty, you and Neil are true inspirations

This is a beautifully written and honest account of a life with mental illness. I was gripped from start to finish

Thank you Jonny for sharing your story. I heard you speaking about the book on James O'Brien's LBC show and loved the way you expressed yourself. This book is an amplification of that. Thank you for bearing your soul so that others can learn from your experiences and hopefully discover something of themselves in the process - I certainly did 😊♥️

What a book! Loved it from the start and some of the life experiences were so descriptive it was brilliant to listen to and so hard to stop, even made me go a longer route one time on the way home just so I could get the end of the chapter in.
Would love to see live or will try and invite to a Mental Health day at work. Thanks for your account Jonny and take care 😎

I'm delighted the author was also the narrator, as that added to the experience . An incredible story, by a truly incredible man. A great tool for those that want to educate themselves, and an inspiration for those with a particular interest in mental health.

An exciting true story from beginning to end

Amazing how genuine the story is, how straight to the point delicate themes are discussed. Jonny shows an enormous capacity to go beyond his difficult and challenging life and transform it into an opportunity to help others. He brings up mental health into discussion in a natural and safe environment with dignity and respect.

It's a very touching and moving personal story about Jonny Benjamin's struggle with his mental illness and his road to recovery. I got this book after hearing Jonny's and Neil's story at a conference. I listened to this book while running and many times I found myself running and crying or close to tears. The reason for this is that Jonny's account of his journey is very open, very sincere and impressively honest. It resonated a lot with my personal experiences. As a practising psychologist, I learned from this lived experience of struggle with mental health difficulties things I could never learn from textbooks and lectures. I also find it very inspiring and hopeful – I want to remind myself about Jonny's story when I deal with situations that seem hopeless and everyone involved starts to feel helpless. As a parent, if found it very shocking in a sense that we might not know what kind of struggles might be torturing our kids, even if try to be caring and supportive parents. Therefore it seems so important that Jonny is sharing his personal story and is doing so much to remove the stigma surrounding mental health. As this stigma makes us hide or ignore our struggles when in fact it would be better for all of us if we were more open about them. Thank you!