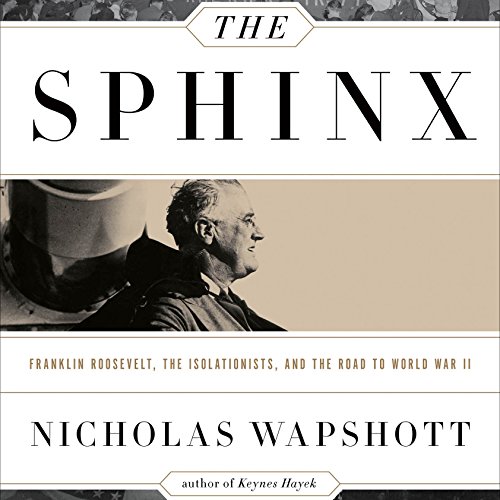 Before Pearl Harbor, before the Nazi invasion of Poland, America teetered between the desire for isolation and the threat of world war. May 1938. Franklin Delano Roosevelt - recently reelected to a second term as president - sat in the Oval Office and contemplated two possibilities: the rule of fascism overseas, and a third term. With Hitler's reach extending into Austria, and with the atrocities of World War I still fresh in the American memory, Roosevelt faced the question that would prove one of the most defining in American history: whether to once again go to war in Europe.

In The Sphinx, Nicholas Wapshott recounts how an ambitious and resilient Roosevelt - nicknamed "the Sphinx" for his cunning, cryptic rapport with the press - devised and doggedly pursued a strategy to sway the American people to abandon isolationism and take up the mantle of the world's most powerful nation. Chief among Roosevelt's antagonists was his friend Joseph P. Kennedy, a stock market magnate and the patriarch of what was to become one of the nation's most storied dynasties. Kennedy's financial, political, and personal interests aligned him with a war-weary American public, and he counted among his isolationist allies no less than Walt Disney, William Randolph Hearst, and Henry Ford - prominent businessmen who believed America had no business in conflicts across the Atlantic. The ensuing battle - waged with fiery rhetoric, agile diplomacy, media sabotage, and petty political antics - would land US troops in Europe within three years, secure Roosevelt's legacy, and set a standard for American military strategy for years to come. With millions of lives - and a future paradigm of foreign intervention - hanging in the balance, The Sphinx captures a political giant at the height of his powers and an American identity crisis that continues to this day.

History does repeat itself that is relevant today. Very well researched book. Brings out the uniqueness and quirkiness of our historical figures.