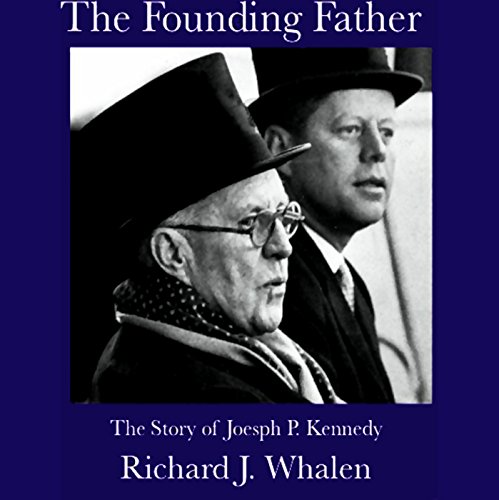 Boldly original and fully documented, this unauthorized yet definitive biography tells the almost incredible story of Joseph P. Kennedy, grandson of a poor Irish immigrant, controversial founder of a great American fortune, and father of the 35th President of the United States, John F. Kennedy.

But the ruthless, iron-willed Kennedy rebounded. He shifted his ambitions to his sons and used his showman's savvy to found an image-centered political dynasty, translating wealth into unprecedented power...until tragedy intervened. Jack and Bobby were both assassinated.

Whalen's enduring classic of investigative scholarship was the first book to portray the Kennedys as real people, "warts and all". Nominated for the Pulitzer Prize and the National Book Award, the fair, balanced, and fearless Founding Father is the starting point of the fascinating Kennedy family saga.

"An exemplary biography....Mr. Whalen paces the story well, conveying the strengths and weaknesses of this remarkable person with judiciousness." ( The New Yorker)
"In The Founding Father, Richard J. Whalen, a first-rate journalist, presents the product of two years' research, a detailed, lively account illuminating many of the obscure aspects of Kennedy's career, especially his wide-ranging business operations. Yet this fine biography forces the reader to decide for himself what manner of man Kennedy really has been." ( The New York Times Book Review)

What listeners say about The Founding Father

For students of the time it is pertinent, useful and interesting. However, much more than this is known about Mr. Kennedy and his connections which throws a darker shadow on the man than is revealed here. This work feels decidedly imcomplete.

As an audio work it is dreadful! The author has chosen to read his own work and whilst he may be a talented writer he certainly is not a talented reader. It took an effort to stay with it because his delivery is annoyingly amateurish and his need to verbally open and close every set of quotation marks with 'quote........end quote' rather than simply by inflection must have been designed to get on a listeners nerves and it does.

Some marks for what's there: none for the yawning gaps: lose a few for the performance!

I think the book itself was good in that the story was well written and easy to follow. However the narration was so bad and in my opinion completely unprofessional that it almost spoiled it.

Read the book, don't listen to it.

I must agree with another reviewer that the narration on this book is ghastly. I couldn't get through the first section. The content is fascinating, but after the 500th "quote/unquote" , I had to turn it off. Really awful and a shame. Authors to stick to being authors and let professional readers do the readings of their books.

Provides an intimate portrayal of a complex man who fathered a dynasty of American politicians. In addition, the activities of Joe Kennedy, and the background from whence he came are finely yet enthrallingly revealed. I learned much more depth about this period of American history, from the treatment of the Irish immigrants, to the stock market, to his inside experience in England, to the nurturing and care of his 9 children. Stimulating and engrossing read. Highly recommended!

One of the best biographies I have listened to

This audiobook was read by the author. He has a soothing grandfatherly story-teller voice that is easy to listen to. This book was written in the 1960s so the language is of that era. This book explains in great detail the life and times of Joe Kennedy from when his grandparents immigrated to America up to JFK's short presidency. After finishing this book, I got a good sense of the drive and ambition of this man to create a family dynasty that goes beyond just amassing wealth.

A Great Bit of History

No matter which side of the political divide you hail from, I believe you will enjoy this work immensely. It gripped me from the start.
Mr.Whalen's narration is warm and easy.

I highly recommend this reading,especially to political and/or 20th century history buffs.

The author is the worst narrator I have ever heard. He speaks painfully slowly. You can hear him turn the pages. I really wanted to read this, but I couldn't bear the narration.

The ponderous delivery of his own work ruins this otherwise worthwhile "listen". The needless and constant repetition of "quote" "end quote" simply adds to the misery. The only way I managed to finish the book was by speeding up the play back which the makes the rendition bearable.

I hate to be petty about it, but this bookConte, whatever its merits, is significantly harmed by the author's choice to read his own work. He is halting and his pacing is inconsistent. It's extremely hard to listen.

There ought to be a law against an author narrating his own work. There is no doubt that the author was quite scholarly in his research, but the narration is beyond bad. I finally had to give up on it. I just couldn't stand any more of the choppy speech and background noise.

WOW!!! A MUST LISTEN

Apart from the narration, which leaned toward the upside of boring,
this book was incredible. It's well written, thouroughly organized, understandable, and solidly informative. I highly, highly recommend it. It'll be worth your time-- and may be worth paying full price. It's that good!

I've read just about anything and everything Kennedy related that I can get my hands on. So, I was thrilled when this selection popped up on Audible. The book includes some bits of information I haven't read in others, but I found the narration horrendous. There were mispronunciations and worse, in my opinion, the ghastly and inconsistently applied (and oh so irritating over the long haul) usage of "open quote", "quote", and "end quote." I'm usually pretty impervious to the individual idioscyncrasies of readers, but I've got to say those seemingly erroneous blats of "quote!" followed by mumbled, "endquote" peppered throughout really messed up the flow of the narrative for me. With few exceptions, I haven't been impressed when authors read their own works.