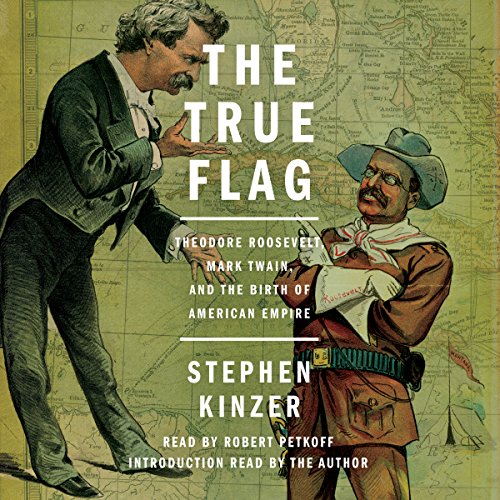 By: Stephen Kinzer
Narrated by: Robert Petkoff
Try for £0.00

The best-selling author of Overthrow and The Brothers brings to life the forgotten political debate that set America's interventionist course in the world for the 20th century and beyond.

How should the United States act in the world? Americans cannot decide. Sometimes we burn with righteous anger, launching foreign wars and deposing governments. Then we retreat - until the cycle begins again.

No matter how often we debate this question, none of what we say is original. Every argument is a pale shadow of the first and greatest debate, which erupted more than a century ago. Its themes resurface every time Americans argue whether to intervene in a foreign country.

Revealing a piece of forgotten history in The True Flag, Stephen Kinzer transports us to the dawn of the 20th century, when the United States first found itself with the chance to dominate faraway lands. That prospect thrilled some Americans. It horrified others. Their debate gripped the nation.

The country's best-known political and intellectual leaders took sides. Theodore Roosevelt, Henry Cabot Lodge, and William Randolph Hearst pushed for imperial expansion; Mark Twain, Booker T. Washington, and Andrew Carnegie preached restraint. Only once before - in the period when the United States was founded - have so many brilliant Americans so eloquently debated a question so fraught with meaning for all humanity.

All Americans, regardless of political perspective, can take inspiration from the titans who faced off in this epic confrontation. Their words are amazingly current. Every argument over America's role in the world grows from this one. It all starts here. This program includes an introduction read by the author.

What listeners say about The True Flag

Revelatory tales of the birth of American Empire

Turning point in US identity

Stephen Kinzer has a talent for pitching serious history at a level which is comprehensible to the layman. Hopefully we will see more of his books on Audible. This book recounts the politics and social attitudes of America's takeover of the vestiges of the Spanish empire. Its a rivetting and somewhat tragic story, laying the foundations of America's quasi imperial role in the 20th century. It might sound a bit dry but with players like Roosevelt, Karl Schurz, Andrew Carnegie and Mark Twain involved there is never a dull moment. Excellent reading by Robert Petkoff.

I'm currently active duty Army with 17 years in service. In my opinion, this book should be read by every soldier and, most importantly, by our politicians who decide whether to send us into harms way. As the author demonstrates so eloquently in this book, intervention abroad (whether by democrats or republicans) rarely leads to the intended goals due to ignorance, hubris, and unintended consequences. The Spanish-American War is a little understood and rarely discussed period of American military history. But that really should change given that the vigorous debate surrounding it are just as relevant today as they were over 100 years ago.

This well told history of the Spanish American War serves up many insights into the roots, motivations, and perils of American intervetion abroad right up to our present quagmires in Iraq and Afganistan. The heated political debates among giant personalities are as relevant today as they were in the 1890s. These are lessons we have not yet learned as a nation. Our failure heed them will create an increasingly unstable and dangerous world. Excellent and important book. Highly recommended.

The publisher’s description is blatantly misleading. The author clearly wrote the book with the intent to degrade and defame Theodore Roosevelt. The venom is evident in every quote chosen and facts pointed out. If you are interested in the subject matter of the historical origin of imperialism in America or Roosevelt’s role, as promised by the publisher’s description of this book, you will be bitterly disappointed.
The press is yellow, money is behind all of America’s worldly interest, Roosevelt was a brutish thug who would never have amounted to anything without Henry Cabot Lodge, and Mark Twain is a liberal Moses.
No one reading the publisher’s notes, if the had been true as to the bent of this book, would buy it.
Mark Twain said, “Get your facts straight first, then you can bend them any way you want.”
The author wrote the book bent the facts as he wished pursuant the dictates of “the iconoclastic Mark Twain” (authors words) - as is his right.
Just wish the publisher’s notes properly characterized the book - this was a wasted credit.
One would expect historical books to portray the facts, as least somewhat, neutrally. This was horribly disappointing.

Opinion in place of just fact

Starts off as a enjoyable history of America’s journey towards imperialism, but the last half becomes an opinion piece. Created and written to sway instead of inform. I wish it had stayed neutral throughout its entirety.

A fascinating window into USA history

I thought I was familiar with American history. But the great debate between imperialists and anti-imperialists at the end of the 19th century and beginning of the 20th century, was largely unknown to me. The author provides a detailed and fascinating exploration of that debate. Narrowly lost by the anti-imperialists, the outcome of that debate has shaped our 20th century American experience and is important to understand. I commend the book without reservation.

When one takes a look at the beginnings of the policies that formed today's political climate, a greater understanding of our times can be achieved. Expansionism, Imperialism, or conquest beyond our current borders didn't just start with the latest Presidency. Looking at Teddy Roosevelt , the Spanish American War, the Philippine Insurrection, McKinley's assassination and other events of the period will help us see how America got where we are today.

Not all the facts

The book would be more interesting if it brought all the facts, yet the author seems to prefer weaving a tale and cherry-pick one-sided bombastic examples to lead you to believe that only three villains changed America's foreign policy. The first half of the author's story begins with the Spanish-American war, while completely ignoring a number of other wars, internal affairs, and expansionism that led America to plunder the continental United States, pretending instead that the author has discovered this one event was where it all started. Looking at this, it actually seems a bit of an unusual place to begin this tale, but it appears the author had an axe to grind with Theodore Roosevelt (and perhaps deservedly so).

The later half of the book improves the discourse, and eventually balances the factual weight with more political characters while broadening the historical context. I've increased my rating proportionately.

At the end, you realize the author had an agenda to sell and isn't interested in all the relevant facts

This is a pedantic string of quotes masquerading as a book. I disliked it immensely.

History in the style of a comic book

Kinzer is a talented writer and researcher. But his simplistic, wildly distorted view of American history fatally taints the narrative. No U.S. military action in the last 125 years left things for the better, per his last chapter. He even implies that the Japanese attack on the U.S. in 1941 was provoked by our military actions in the preceding decades! So the "listening experience" could only be improved were the book written by an historian who doesn't see the world as either black or white.

Has The True Flag turned you off from other books in this genre?

No, because it's an outlier in its distortions and naivete.

Have you listened to any of Robert Petkoff’s other performances before? How does this one compare?

Yes. This performance is quite good, as have been the others I have heard.

Every American needs to read this book. I implore you to do so. As a bonus, it's also a very engaging story.