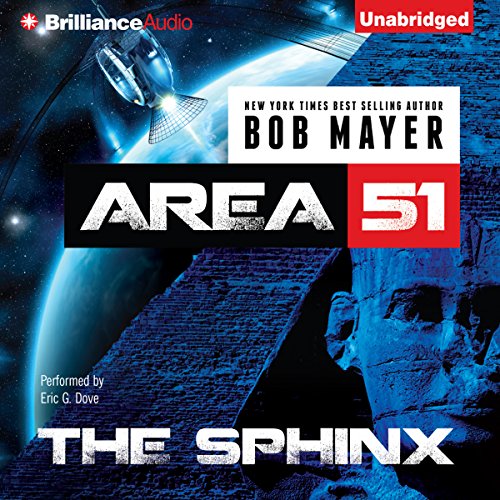 Dr. Lisa Duncan and Special Forces officer Mike Turcotte know better than anyone that no secret is safe for long - especially one that offers untold power. Case in point: No sooner does Turcotte’s elite Area 51 team uncover a dormant alien ship in Earth's orbit than a group of alien-human hybrids seizes it and uses its technology to commandeer a satellite array bristling with nuclear missiles. Now they’re demanding that humankind hand over the key to an ancient stash of alien technology…or watch an entire continent be reduced to atomic rubble.

Doom seems certain, as the required key is believed lost to the ages - until an unwitting anthropologist discovers the first of many clues to its hiding place. As Duncan and Turcotte race to reach the key - and the powerful treasure it can unlock - ahead of their alien foes, the quest leads them deep into a deadly maze within the Great Sphinx of Giza. The prize? Nothing less than the legendary Ark of the Covenant.

What listeners say about The Sphinx

While the concept and story are really quite good, this book was incredibly difficult to listen to as the Narrator completely butchered the natural cadence of human speech. Spitting words and sentences as if reading for a slam poetry competition, Dove seems to have no concept of the purpose of punctuation to denote pauses, breaks, and the flow of language.

Would you be willing to try another one of Eric G. Dove’s performances?

I Want a refund.
The narrator messed up a perfectly good.
I listened for about 40 mins assuming he was just an introducer, but realized he's going to the narrator for the full book.
His tone is like a 5th grade school boy and his British & Arab accents are extremely phony and bad.
Even Hollywood movies would not mess up the accents so badly

Again a good story streched out over too many book

I have listened to 5 of these and I won't be listening to any more. Again I find a book that has a great premise but it is far too long - stretched over goodness knows how many books but really could have been a great trilogy at most. Found myself feeling duped into buying the next book only to find that the story was only moved on a little.

Have you listened to any of Eric G. Dove’s other performances before? How does this one compare?

The performance was good.

performance was disappointing. key characters name pronounced completely different than the 1st 3 books. speed was to fast to allow time to visualize the description. Don't waste your money on this audio.

Why did you change narrators? The previous narrator was fantastic. This new guy is a cheap imitation. I’m going to have to stop after this book. This really ruins the audiobook for me.

I love the story, setting and plot but could you please add the books together. I’m starting to feel cheated by this series. Every time I feel we are getting somewhere the book ends then in the next book is full of catch up from previous books that feel like a cheap way to fill the book.

If I didn’t love the core story I would demand a refund but the author shapes a great world full of intrigue and mystery. I recommend buying the physical book and skipping this audiobook.

Very good but I have one qualm...

I found this book series by accident but being the slight sci-fi nerd that I am I was slightly hooked after listening to the first book. This is the fourth book in the series and I will say they are a lot of fun to listen to. the biggest issue I have with this particular book is not so much the story itself but the fact that they changed the reader of the book. the first three books were performed excellently and while this one was red fairly well, changing the person that reads the book made it very hard for me to stick with this one. also this particular reader or performer seemed Limited in his ability to perform multiple characters much less language and Regional accents. I slowly got accustomed towards the last quarter of the book but changing out the performers this for a long in the series is like changing all of the actors in a movie, it may be the same character but the actor is what gives them their personality.

this one seems to have fallen flat

this one has fallen flat I'm not sure if its setting up for the next book or what.

Is there a point?

I finished the book and didn't really have to struggle. I enjoyed the historic bits and the way the true facts were twisted to create the new world. BUT I asked myself throughout and at the end, "why?" Interesting vignettes but why? Did I miss the explanation of why the aliens were doing what they did in some prior book? And who were these "Area 51" aliens?

I'm trying to figure out how to explain the problem. The writing was good enough to listen to this but what was the plot? Does the reason for all the actions get explained in another book?

That's why I scored 2 stars. I enjoyed the general background historical stories but the narrator didn't continue anything and I spent the entire book trying to figure out where the background plot was...why was all this happening.

Loved it ABSOLUTELY. It was a great book.Recomend it. Absolutely loved it. Need more books