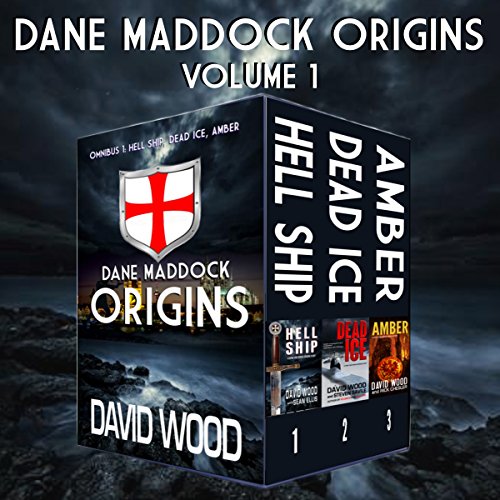 By: David Wood
Narrated by: Jeffrey Kafer
Try for £0.00

When Navy SEAL Dane Maddock and his squad are sent to find the wreckage of a sunken World War II Japanese "hell ship", they find themselves caught up in a deadly race to solve an 800-year-old mystery. Can Dane and Bones outrun, outfight, and outwit a cadre of deadly adversaries and find the key to unlock the deadly secret of the Knights Templar? Sunken ships, conspiracies, secret societies, historical mysteries, and all the action you can handle! A globe-trotting, adrenaline-charged thriller in the tradition of Clive Cussler and James Rollins. Don't miss it!

Navy SEAL Dane Maddock leads a team of operatives in a race against Russian Spetznaz agents to find a lost nuclear submarine and recover a threat known only as Romanov's Bane, but the frozen wasteland of Wrangel Island is home to more than enemy soldiers. Soon, Dane and Bones find themselves face-to-face with dangers thought long extinct. Join them as they seek to foil a madman's deadly plot in the action-packed thriller Dead Ice.

They called it the Eighth Wonder of the World. For more than 200 years, the world marveled at the fabled Amber Room. And then came the Nazis.

Since the Second World War, one of the world's most magnificent lost treasures has lain hidden, and it's up to Navy SEALs Dane Maddock and "Bones" Bonebrake to find it again. Joined by Zara Leopov, their squad must follow the trail of clues from history in a perilous, action-packed race to find a treasure and unlock a deadly secret hidden in Amber.

What listeners say about The Dane Maddock Origins: Omnibus 1

Loved this I've read the books but really enjoyed listening whilst being able to do other things.
The narrator's voice was easy to listen to, no awkward pronunciations.
As expected the Maddock and Bones' storyline is edge of your seat, full of humour and adventure.
A very enjoyable listen, a great way to access these excellent books!

I just finished the first book in this collection (Hell Ship) and although I plan to at least listen to the next two books, if the main characters don't show some noticeable improvement in the common sense department I may stop there. I mean come on, you know you are being chased by the bad guys because you have already been caught by them twice before. Yet you continue on not planning for them to be at your next major location? Seriously! I have a hard time with stupid heroes.

That being said, for the most part I enjoyed the book. The cadence and plot were good. It was a fun read with lots of globe trotting, funny banter, a little history, and some lost treasure.

The best part for me though was the narrator. In reviews of the later books there are some complaints about him but I think he's great. He's what I would call a military genre reader like Dick Hill or Scott Brick. He moves the story along at a great pace, has a commanding voice, and his delivery of the banter is spot on. And after all, these guys are in the military in this portion of the series so his voice fits! Now if you are expecting a great range of different voices you will probably be a little disappointed but there aren't that many characters in the story so it really doesn't matter much.

If you are looking for a fun romp across the globe with some suspense and a little mystery. Give this series a try.