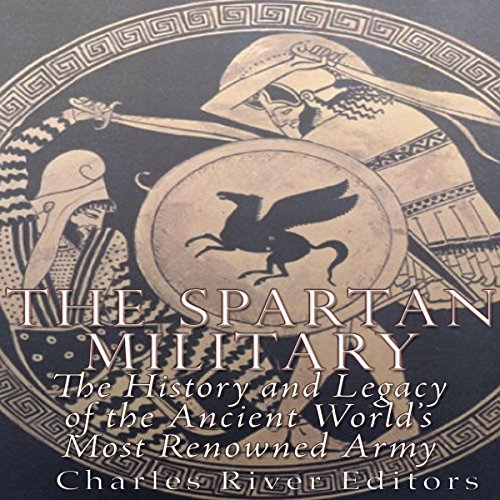 The History and Legacy of the Ancient World's Most Renowned Army
By: Charles River Editors
Narrated by: Scott Clem
Length: 1 hr and 52 mins
Categories: History, Ancient
2 out of 5 stars 2.0 (1 rating)

There have been no shortage of great warrior societies in history, including the Romans, Mongols, Macedonians, and Vikings, and the list goes on. Yet one humble city in particular, nestled in a valley near the Eurotas River in the Greek region of the Peloponnese and once ridiculed as little more than a cluster of villages inhabited by uncouth shepherds, produced the most famous warrior elite the world has ever known.

The most unique city-state in ancient Greece was Sparta, which continues to fascinate contemporary society. It is not entirely clear why Sparta placed such a great emphasis on having a militaristic society, but the result was that military fitness was a preoccupation from birth. If a Spartan baby did not appear physically fit at birth, it was left to die. Spartan children underwent military training around the age of seven years old, and every male had to join the army around the age of 18.

The Spartans, whose carefully constructed approach to warfare and - there is no other word for it - Spartan way of life, earned the grudging admiration of all of Greece and succeeded in establishing themselves in the years following the reforms of the semi-legendary ruler Lycurgus as the greatest military force in all of Hellas. Athens might have the mightiest fleet and the greatest cadre of philosophers and dramatists, Thessaly might have had the most vaunted cavalry, and the great city-states of Argos, Thebes, and Corinth all had their own claims to fame, but on the battlefield the Spartan phalanx stood without peer. So feared were they in Greece that their very appearance on the battlefield could cause entire enemy armies to flee in terror, and in one of history's most famous battles, 300 Spartan warriors headed a combined Greek force which held off the hundreds of thousands of Persian warriors of Xerxes' invading army for three days at Thermopylae, inflicting an estimated 20,000 casualties upon them before dying to the last man rather than retreating.

Sparta will forever be known for its military prowess, but they had lives off the battlefield as well, and their way of life was also unique. For example, Spartan females were formally educated, which was a rarity among the city-states, and the Spartan way of life was entirely dependent on a class of indentured servants known as the helots. Yet the Laws of Lycurgus, which ordered all Spartans to disregard art (with the exception of song, which the Spartans prized, and some forms of music and poetry), to distrust philosophy, and to abhor excess in all things, were designed to create the perfect warrior society, and they did. As a result, the Spartans became notorious for "Laconic phrases."