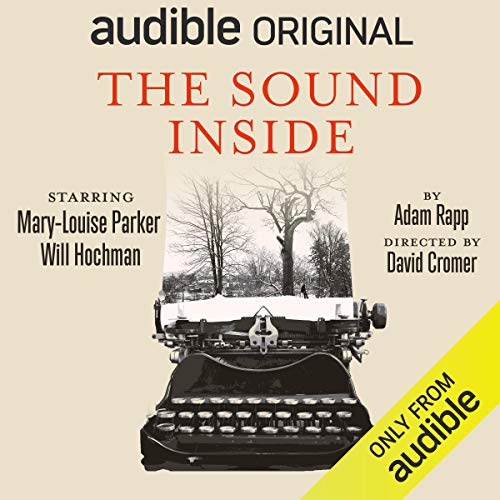 By: Adam Rapp
Narrated by: Mary-Louise Parker, Will Hochman

Tony®, Golden Globe, and Emmy® Award winner Mary-Louise Parker stars in what ​The New York Times​ calls “a gripping mystery” about Bella Baird, a​ ​novelist and Ivy League English professor who prizes her solitude. When faced with a challenge she cannot tackle alone,​ Bella must ally herself with a brilliant but mysterious student (William Hochman) and confront the question of what one person can truly do for another. Intensely intimate and deeply moving, Adam Rapp’s haunting play received resounding acclaim during its Broadway run at ​Studio​ 54 and was nominated for six Tony Awards​. ​Now available only on Au​dible, The Sound Inside is a “vital, compassionate and rivetingly theatrical drama about tragedy and redemption, sacrifice and loss, the bright blaze of artistic creation and the sadness of an unknowable stranger” (​The Hollywood Reporter)​.

Directed by David Cromer.
Music by Daniel Kluger by arrangement with peermusic

Portions of this audiobook contain mature language and themes. Listener discretion is advised.

What listeners say about The Sound Inside

I loved it, not at all expected...but there is the ache in my chest that is familiar after a really good book.

Do yourself a favor. Get comfortable for an hour and a half. Loose yourself.

Not sure if this is as great as people think..

If this book was any longer than it was, I wouldn’t have finished. Great performances, but the dialogue was so abrasive I almost turned it off.
Also it’s got lots of details on how to commit suicide... doesn’t sit well with me knowing that there are people who might have gained harmful information from the book. Overall, would NOT recommend.

Didn’t like Jessica’s narration in beginning. Too stilted. We don’t realize she is dictating while she is writing. I get used to it when she does it later Writer should have explained scene better
The story jumps around too much
The Professor should have realized the student was beginning schizophrenia and checked up on his actions sooner and gotten him help but she is too self involved. Story is not for the mentally disturbed The writer must take more responsibility for his book’s consequences
In the epilogue This is a tragedy not a drama

I had no idea what to expect and was intrigued by the idea of insight into a professional singleton.

The performance is engrossing and the characters both real and gauzy.

A delightful distraction that will have you reflecting and thinking for some time.

I started listening to this book because of the rave reviews from other listeners. I really don’t know what they saw in this story. It is well performed but the characters are so unlikable and their lives so lost. I kept listening hoping for some redemption but I hoped in vain!

I grabbed this as a distraction, thinking it could fill the silence this afternoon. I found myself connected and fully engaged. The dialog is amazing, performance by both actors provide layers of nuance beyond the words. So good.

This story is an unexpected journey. I did not expect to have so much woven into it based on the length. I’m not sure if I devoured the story or if it devoured me. Since this was my first Adam Rapp piece, I can’t wait to discover the others.

It broke my heart and gave me hope all at once.
(I don’t need four more words, Audible, thank you)