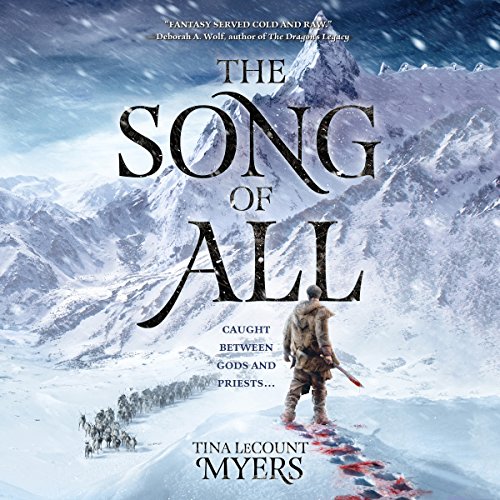 The Song of All

The Song of All

A former warrior caught between gods and priests must fight for the survival of his family in this dark epic fantasy debut, set in a harsh arctic world inspired by Scandinavian indigenous cultures.

On the forbidding fringes of the tundra, where years are marked by seasons of snow, humans war with immortals in the name of their shared gods. Irjan, a human warrior, is ruthless and lethal, a legend among the Brethren of Hunters. But even legends grow tired and disillusioned.

Scarred and weary of bloodshed, Irjan turns his back on his oath and his calling to hide away and live a peaceful life as a farmer, husband, and father. But his past is not so easily left behind. When an ambitious village priest conspires with the vengeful comrades Irjan has forsaken, the fragile peace in the Northlands of Davvieana is at stake.

His bloody past revealed, Irjan’s present unravels as he faces an ultimatum: return to hunt the immortals or lose his child. But with his son’s life hanging in the balance, as Irjan follows the tracks through the dark and desolate snow-covered forests, it is not death he searches for, but life.

Honestly, in the beginning I didn't know what to think of the writing style and narration choice but by somewhere around chapter five it was easily decided. The author takes you into a world so uniquely different from any other fantasy novel that you can't help but want to hear more. Admitedly there are slow spans that seemed just a bit to long, though not long enough to make me give up. Overall The book has very good story progression and character development. I especially enjoyed the representation of magic. Not that of fire wielding mages or all powerful dragons, instead a magic that truly permeates all things existing in this world. It gave me Jedi force kind of vibe. The mental picture painted by the author of this world walks hand and hand with the narrators voice. With all that said, I wouldn't put this novel on the same shelf with my absolute favorite fantasy stories such as Game of Thrones or Mist Born series. I have no trouble pushing it in next to Throne of Glass. Which is pretty impressive considering the Author is a surfer babe and this being her first novel.....Don't take me wrong I love surfer babes, It was the highest of compliments.

the book is extremely unique, but choppy at times. I look forward to the sequel.

I can’t wait for the next installment!

Very graceful cadence to the writing, the story builds slowly at first as the world takes shape, but as the significance of each thread dawns upon the reader, anticipation builds and becomes riveting!

What a fun engrossing world! Its song of love, duty and honor drew me in and I finished it in three days. Snow, swords and mysterious immortals, can’t wait for the next one!

I will be giving a full review on my podcast, The Nerd Book Review, which should air April 29th.
I enjoyed this novel, which reminds me more of literary fiction than a true fantasy novel. It is very character driven and hits you on an emotional level. The novel takes place in a snowy land and is essentially a tale about two people trying to save their children. Listen to the podcast to find out more!