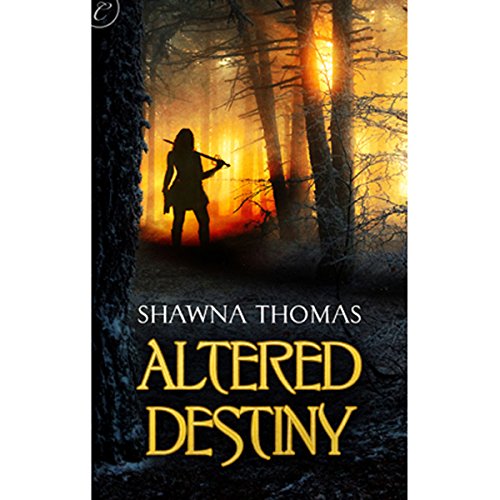 By: Shawna Thomas
Narrated by: Uma Incrocci
Try for £0.00

Selia has run her family's tavern since she was 15 and can hunt and fight as the equal of any male. When she rescues a badly wounded man and nurses him back to health, she has no idea she's about to change not only her life, but also the destinies of two peoples….

The battered warrior is a Svistra - a race of bloodthirsty savages determined to destroy her homeland. Or so the stories claim. Jaden reveals a different truth: how his ancestors were driven into the barren northern mountains. Now they are strong, and war parties are pushing south, wanting their land back.

The son of a Svistra commander, Jaden is looking for a way to bring peace to both humans and Svistrans. He tries to ignore his growing passion for Selia, but when she is captured, he has to decide what he would be willing to sacrifice to save the woman he loves.

What listeners say about Altered Destiny

Wow! It was perfect!

Its been a while since my last good fantasy book. I absolutely loved it. Action, the story kept moving, violence, drama, good vs. evil, and love. Really well written. I get bored easily when authors drone on and on and stay in the same place on the same problem where I just want to smack a character. Not one instance of that in this one! I didnt 5 star the performance since Uma sometimes gets monotone on the non-speaking parts but there were great differences in the characters voices, you always know whos talking.

Pure fantasy ..... but I wasn't dissappointed

This was a real surprise of a book, I bought it before any reviews were made and so I took a chance and I'm so glad I did.

It had a really unusual storyline built around two likeable characters - Selia - a human and a barkeeper and Jaden who is a Svistra and a blood drinker. The two races hate each other but after she saves him they are drawn together despite their differences. It's set in a fantasy world where there are many Kings ruling fueding lands and they all want the same piece!! It has love, hate, good guys vs bad guys, a steadily moving forward storyline and a good narrator so what more do you want!

I really enjoyed this book, it was well worth the credit.

A satisfying twist on the vampire tale. The setting is what I'd call "high fantasy" - horses, swords, castles, inns, tankards of ale, etc. The vampires in question are the Svistra, a race that lives alongside humans geographically, and a war is in progress over the disputed lands. The story is more of a civil war between hated enemies than human versus monster or supernatural beast, as the Svistra are intelligent and not so gifted that they are unbeatable. I liked the main character Selia. She was practical, stubborn, plucky, and moral but not overly gorgeous, sexy, or emotional. She stands up for herself and those she cares about, buckles on a sword, and takes care of business. While there is some cliche in her finding and nursing the one Svistra "prince" that would try to stop war with the humans and falling in love with him despite the racial taboos, the storyline was handled in a mostly believable and deft way. The romance was mostly understated and PG-13. There is violence and blood in the battle scenes, but in a fantasy way not a horror way. The book seemed YA age appropriate, and was a welcome relief from the overt emotional angst of most YA romances. It works as a romance as well as a parable of racial intolerance. It was also satisfying in that it wrapped up the story in one book without leaving you looking for the next book in a series. This book reminded me of Clay & Susan Griffith's Vampire Empire series and Neil Gaiman's Stardust. The narration was well paced and well edited.

I didn't know what to expect from this, but it was AWESOME. Fantastic story, and the narrator did a great job. Two thumbs up!

I did not hate this listen but it was not my favorite either. I did not enjoy the characters as much as I tried to although narrator did a fine job.

If I hadnt read this I would not have been missing all that much.

Although only alluded to in the book, this is actually a dystopian acting as a fantasy. It's strength is fairly grounded main character who doesn't rush off constantly so she can be saved by mysterious bad guy. But it's weakness is that there really is nothing new here and the writing lacks sophistication enough to really draw me in. I never invested in the story or the characters and honestly was a bit bored throughout. It started to play out more like a bodice ripper romance than a fantasy.

Selia owns a tavern and can take care of herself - good with both blade and her brain. When she rescues a man she soon discovers is one of the reviled Svistra, she will embark on a quest that will pit her against both her people and the Svistra. At its heart, though, is her growing love of the Svistra warrior she rescued.

This dystopian world is not too terrible: clealry the Svistra are genetic mutations meant to enhance their physical abilities. This put them at odds with the normal humans, who mistrust them and continually break treaties. Author Thomas has a lot of fun with the world, imagining all kinds of mutations from whatever caused the world to revert back to medieval trappings.

But as the story progressed, I really began to lose interest. There was nothing really new added to the dystopian or fantasy genre (though I appreciate the author didn't have to spell out that this was a dystopian and not a fantasy). I honestly had read this type of plot often in historical romances, especially Scottish, and at this stage in my reading, I really want something different and more unique.

The writing is decent and I was able to follow the story well. I listened to the Audible version and the narrator did a decent job.

Excellent storytelling, riveted to the end!

Well-rounded characters with a very appealing heroine and 2 heroes just to make it less predictable. I liked the romantic ending. Also the narrator was fabulous!

This wasn’t a bad book, but it wasn’t one that I was in a hurry to finish. I often would put it down and it would take me a while to pick it back up. I did finish the book and the second half was better than the first. At first I, did not realize this was a dystopia book, because it had a fantasy feel to it at first with horses, villages, castles, inns, etc. While a decent book, parts of the book have been done before and often, the only real new part was that she made this a dystopia instead of a fantasy. The romance of the book was mild with a bit of a Romeo and Juliet vibe to it. My favorite character was probably Selia’s brother Orin, he was such a sweetie. It was kind of nice reading a book that was a standalone and not a series. Narrator was okay.

Solid book with a good premise

I found Altered Destiny to be a strange mix of predictable and intriguing. There are certain tropes, like the bad guy is unarguably a bad person, and some parts of the story were a bit predictable, but despite all of that, I couldn't stop listening. Selia is a strong, determined character, and I love her relationship with her brother. Then there's Jaden and the added complexity he brings to Selia's life. We get to watch them develop from cautious acquaintance, to grudging partner, to friend and ally, etc. It is an interesting dynamic to witness, and Shawna Thomas does a good job making it realistic.

With regards to pacing, the beginning had a good pace, with a slower getting-to-know-the-world vibe that didn't FEEL slow at all. The last half of the book really takes off, and in places things even seem to happen too fast. There is so much packed into the last half that it is hard to put down. I appreciated that this book was a stand-alone, for while the end feels rushed, it works for the tone of the book. Plus, if it had been stretched out, it probably would have lost some of the pull I felt.

The narrator didn't really have enough distinction between character voices for my taste, but I enjoyed the story nonetheless.

Overall, this is a solid book with a good premise and characters and plot to keep you on your toes.