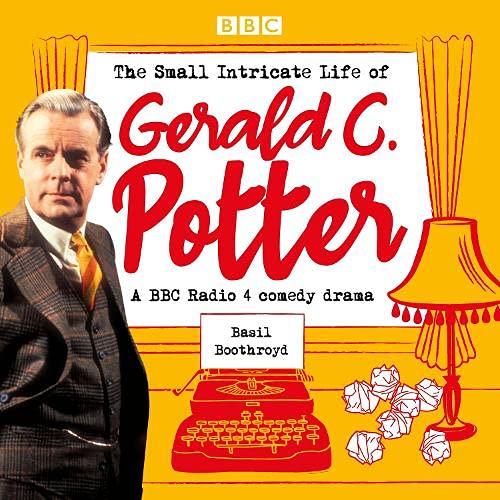 The convoluted chronicle of an optimistic crime writer

Gerald C Potter is the proud author of Death in the Arboretum, described by the Bournemouth Echo as 'well-written'. He works hard on his books, and worries about every comma, adjective and unfortunate typo, but somehow, he never seems to get very much done. However, his wife and fellow novelist, Diana (aka Magnolia Badminton), is positively prolific - much to his chagrin.

These four series recount his daily activities and struggles for inspiration, as he tries to solve the mystery of his missing briefcase; goes up against his wife as they compete to publicise their new books; takes a holiday abroad that's far from relaxing and receives a double-edged surprise on United Potter Day. And in special festive episode 'The Cousin', an unexpected message in a Christmas card leaves Gerald and Diana scrambling to prepare for a last-minute visitor....

Written by celebrated humorist Basil Boothroyd, this witty, quick, clever sitcom ran for five years on Radio 4 between 1976 and 1981. It stars Ian Carmichael (The World of Wooster, Lord Peter Wimsey) as Gerald C Potter, with Charlotte Mitchell (Waggoners' Walk, The Adventures of Black Beauty) as Diana.

What listeners say about The Small Intricate Life of Gerald C. Potter

What a treat to hear once more the brilliant Ian Carmichael as Gerald C Potter. All six of this very entertaining series here which will bear listening to over again