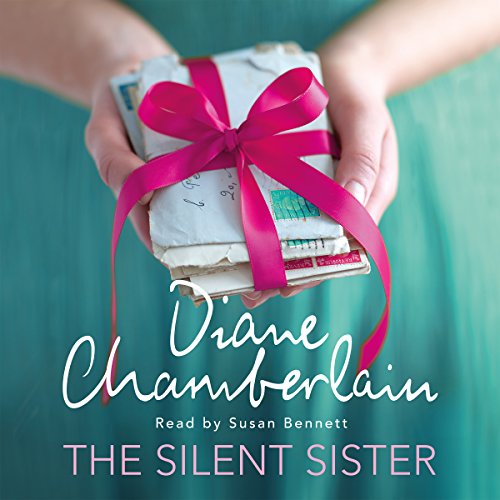 By: Diane Chamberlain
Narrated by: Susan Bennett
Try for £0.00

The Silent Sister is a gripping novel from Diane Chamberlain, the bestselling author of The Midwife's Confession.

What if everything you believed turned out to be a lie?

Riley MacPherson is returning to her childhood home in North Carolina. A place that holds cherished memories. While clearing out the house, she finds a box of old newspaper articles - and a shocking family secret begins to unravel. Riley has spent her whole life believing that her older sister, Lisa, died tragically as a teenager. But now she's starting to uncover the truth: her life has been built on a foundation of lies, told by everyone she loved.

Lisa is alive. Alive and living under a new identity. But why exactly was she on the run all those years ago, and what secrets are being kept now?

As Riley tries to separate reality from fiction, her discoveries call into question everything she thought she knew about her family. Can she find the strength inside herself to decide her future?

Incredibly gripping and emotionally powerful, The Silent Sister is perfect for fans of Jodi Picoult and Liane Moriarty.

What listeners say about The Silent Sister

I really enjoyed this book. Kept me listening as I wanted to know more about the characters and what happened. I don't want to say too much in case I give anything away but I feel it was very well written and narrator was good too.

Well I’ve discovered that I am one hell of a multitasker as I listened to this book IN A DAY! This may not sound like a mammoth task but I have a very active 14 month old baby! It’s amazing the housework you can get through or find with a good book in the background to listen to! I had my daughter Frankie help me clean under our bed just so I could listen to more!

I’m not going to regurgitate the Amazon review as they are always bang on and I’ve finished writing literary essays years ago haha However I have 142 books in my library and I love Diane Chamberlain as there is no profanity (so my child can learn all her bad language exclusively from me haha) and there are no gruesome or macabre scenes that might turn my bundle of joy into a budding serial killer. All in all the most enthralled one can feel without ending up pregnant

This is the first book I have read by this author. I loved it. Can't wait to read more.

loved it...full of twists and turns... and could really relate to.all characters...definitely worth a read. i couldn't put it down

Probably not one of the best

Couldnt put it down

Where does The Silent Sister rank among all the audiobooks you’ve listened to so far?

This my first Diane Chamberlian book and I loved it. I couldnt put it down. The characters were very realistic and I felt I could relate to them. The narrator was superb.

I could get into the story right from the first chapter. It was interesting the way each character told their part of the story and it had lots of twists and turns.

Her voice is very easy to listen to and she narrates very well.

No, but it was enthralling.

I'm now a fan of Diane Chamberlain and have downloaded another book. I hope it is as good as this one.

Loved the story and the narration. Beautifully told. Don’t want to reveal too much here. Highly recommend this author & will be reading more of her books

This was an enjoyable story, the characters were thoughtfully depicted and believable. The writing is skillful and flows nicely. My main criticism is that the plot was a bit predicable.
Enjoyed it, but it's not her best work.

An author new to me, but I'll be looking for more by her. A good story well told.

Incredible, at first I wasn’t really sure of the book it really starts off slow and you have to trust the process and the journey the book will take you on.

You will not understand and you will question so much but all the lies, secrets and deceit will be revealed. I didn’t really know what to think and I sure as heck wasn’t expecting to get emotional but I did and I couldn’t get enough of these characters I was rooting for them.

I loved the narration it was kinda perfect for the story she was Riley to me. I am so glad I really gave this book a fighting chance because I enjoyed it a lot.