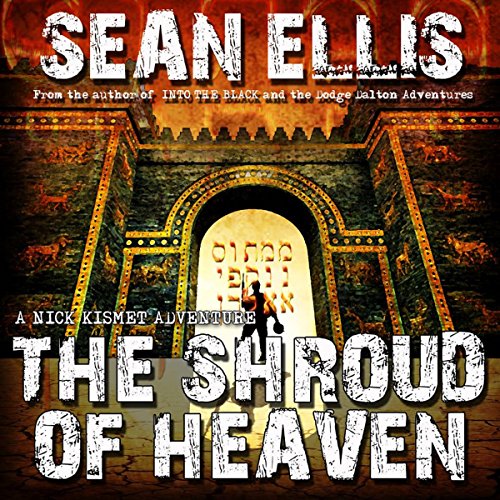 On the bloody battlefields of Iraq, one man's quest to find God will unleash hell.

For more than a decade, Nick Kismet has traveled the world protecting priceless relics and cultural heritage sites from looters while searching for answers to the mystery that has haunted him since the first Gulf War - a mystery that has defined his life. Now, a new war has brought him back to the bloody battlefield where his search began.

Summoned by his friend and mentor, Pierre Chiron, Kismet soon finds himself on the trail of the holy relics of Solomon's Temple, captured centuries before by Babylonian conquerors and thought to be lost to history. But Chiron's quest is not merely to find ancient artifacts; he seeks to find proof - the very fingerprint - of God.

Driven to uncover secrets that have haunted mankind for millennia, pursued by a mysterious assassin and an enemy consumed by hatred, Nick and Pierre journey into the desert to find the terrible truth that lies behind...the Shroud of Heaven.

Back to the Beginning

I listened to the audiobook version of this story and enjoyed it immensely. I have read later Nick Kismet books, so it was interesting for me to read the one that started the series. I liked the pace of the book and the characters in the story were intriguing. I certainly plan on filling in the stories in the series that I have missed.
I thought the audio performance was great and it made the book even more fun to follow.

This was a very good book.I really liked it but the book itself felt like 'Deja vu'.The same plot line and even hiding places for the looked for object is similar to a few other books.One v-e-r-y L-o-n-g chase scene had me nearly giving up on the book.Yes,it is fiction,but this was unbelievable!Kismet is a fine character. Jeffrey S. Fellin was an excellent narrator.I was given this book by the narrator,author or publisher free for an honest review.

This book was an excellent listen. It was a little dated at this point but the premise was still good if you ignore the background when it was written. The action was at times tense and very believable.

There were times when there were surprises and times when you found yourself wondering why things happened the way they did. The pace of action was good.

The narrator was very good and professional with clarity and good pacing.

More fun than I anticipated!

This book is one part Da Vinci Code conspiracy, one part Tom Clancy military thriller, and two parts Indiana Jones adventure. It's a peculiar mixture, but I really enjoyed it.

The narrator did his job well, with the exception of a few pronunciations that I found kind of annoying, but that's me being nitpicky. The different characters' accents were varied and interesting.

The only real complaint I had is that there sometimes wasn't much of a pause when the story changed scenes, which occasionally led to some momentary confusion.

It is pretty clear that sequels will follow this, and I'm excited about that.

in general, I liked the book. There were a few points that I think could have been better. The narrator mispronounced several different words, but the one that really sticks out his his repeated mispronunciation of Deja vu. It was grating on my nerves.
Also, there is a super-long chase scene with an almost unbelievable ending (I don't want to spoil it).
Overall, it would have been better (IMHO) if someone had listened to the book before putting it on the market as an audio book (like a voice editor).