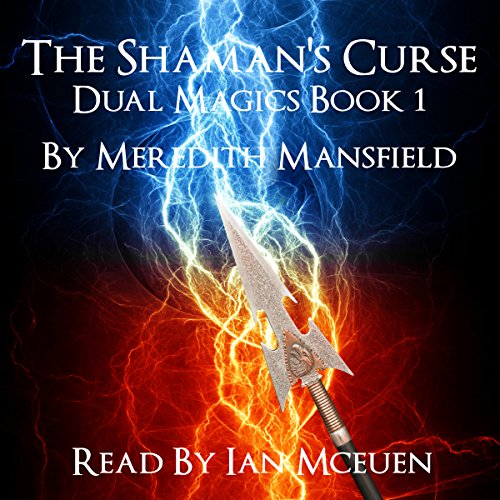 By: Meredith Mansfield
Narrated by: Ian McEuen
Try for £0.00

The two kinds of magic have always been separate. Until now.

Vatar risked his life to try to save his friend - and failed. Now he has an implacable enemy in the shaman, who blames Vatar for the death of his only son. He’s forced to flee his home, at least until the shaman’s thirst for revenge cools.

Taking shelter with his mother’s people in one of the coastal cities, Vatar learns more than he bargained for. He agreed to learn to work iron and steel, but he never suspected to find a magical heritage as well.

And that’s a problem. A huge problem. Because unlike their own Spirit magic, his people regard the city magic as the work of Evil Spirits. If the shaman ever found out about this, it could be the weapon he needs to destroy Vatar.

And yet, finding a way to accept the other side of his heritage may be the only way Vatar can ultimately defeat his enemy and win more than his freedom.

What listeners say about The Shaman's Curse

If you are looking to start something new

Vatar is an adolescent on the verge of taking his manhood test. He and his friends are on a hunting trip when they decided to cool off in a nearby river. Vatar has a premonition of trouble but tries his best to ignore it. None of his friends know about Vatar’s premonitions as they would be seen as a form of magic and magic is not allowed in the society in which Vatar lives.

Vatar and his friends wade into the river. They splash around a bit, all the while, Vatar’s unease grows. He starts to climb the riverbank, trying to get his friends to come with him. He was almost on the bank when they hear a rumbling sound, the sound of a lot of water heading straight toward them.

Vatar makes it to the riverbank and helps his friends climb to safety. All except for one of his friends. Torkaz, the Shaman’s son, was further away than the others. Torkaz gets to the bottom of the bank just as the flash flood hits the riverbed. Vatar reaches out for his friend and manages to grab him. However, the current from the passing water is too strong and the Shaman’s son has swept away. He is later found further down the river, drowned. This tragedy sets off a chain of events that completely affects the course of Vatar’s life. Some good, some bring challenges.

Ian McEuen was the narrator for this book and he did an excellent job. He did a great job with using different voices to help distinguish between each characters. I had no problems telling each character from another. The production quality was very high. No noticeable changes in volume or any audible cracks or pops.

Overall “The Shaman’s Curse - Dual Magics Book 1” is an enjoyable book. I did feel that they were spots where the plot slowed down a bit but there was action as well. Seeing as this is book 1, I expect that part of this book is background information to set up the other books in the series. So I think that’s why parts seem to lag a little.

If you are looking to start something new in the fantasy genre, I highly recommend this book. There are a total of four books in the series however only the first book is available on audio right now. I’m looking forward to the other books becoming available and seeing where life takes Vatar.

It strikes me that there doesn't seem to be a explanation for the stars that are given. So I thought I'd start giving my take on it.
1 horrible no redeeming qualities. So far I've never given a 1.
2 blah but there are redeeming qualities.
3 ok worth reading.
4 great but there's something off.
5 loved it.

So now about this story. I couldn't stop listening, I can't wait for more of this series. I want to say more about this story but I absolutely hate spoilers, so I won't do it to you by going into details. I would like to add that even though it's a young adult book I'm 55 and I loved it.
The narrator brings the story to life.
Reasons I enjoyed this audio book:
Witty, Romantic, Original, Wonderful characters, Great world building, Unpredictable, Entertaining, Action-packed, Funny.
Bookshelves/tags:
adventure, angst, captivity, cliffhanger, futuristic, humorous, kidnap, paranormal, series, werewolf.
This Audiobook was given to me for free at my request from the publisher, author or narrator and I provided this unbiased voluntary review.

I am so glad that I listened to Shaman's Curse as an audiobook. There is no way I would have pronounced all of these names correctly. I hesitate to type then because I doubt I can spell them.

There is a shaman but it isn't his story. He serves as an antagonist and he shows how holding a grudge can be a curse all on it's own.

Actually this story was about a boy named Vitar and his journey to manhood. he makes mistakes, learns hard lessons and discovers secrets about himself and his family.

I loved the narrator he gave each character a unique voice. So much so that I could tell who was speaking without listening for dialogue tags. His Scottish accent is awesome. But so is his underused hillbilly accent.

This book grabs your attention with the popping out words and descriptive writing. The way the author describes the scenes and the feelings of the characters as well as adding fun and interesting way he words and makes the flow of conversations so good and believable.
Now the narration I thought was good but it had a slight background noise if you listen super carefully which might be the producer of the that recording which isn’t the narrators fault nor the author. In addition, it was a bit loud at first and at times for me but basically good narration and I also didn’t like the way I kept hearing the ending of the narrators words like the words “this” so the “s“ is like “ sssss”and he at times he whistles when saying certain words accidentally at times when speaking. He is definitely worth listening to and does great changes in voices of characters I just not an ecstatic fan of this narrator or a favourite of mine but I could bear listening to him and it not make the story unbearable like some audiobooks have been before. He is a still by far a very good narrator do not get me wrong I’m almost sure you might not notice anything wrong and will certainly enjoy his performance as well I enjoyed his performance by the time I had listened to the story to the end:)

Had a very interesting world building with plenty of cultural diversity but I wish it had been better but it’s still good and you are given information to understand enough of what is happening from moment to moment throughout the book which is important but not exceptional but helps in the other hand keep the book from becoming too long long and seeing as there are more books in addition to this soon I would assume to be written and recorded eventually this is hard to even judge completely because the future books may make everything better and clearer so its important to keep that always in mind with all books 1st in a series.
I got the impression that it’s a primarily action type of book versus but has strong confident characters and has emotion that at times is easily felt when hearing the characters in gage with each other.
A decent story .

WHAT IT'S ABOUT
Vatar risked his life to try to save his friend--and failed.
Now he has an implacable enemy in the vengeful shaman, who blames Vatar for the death of his only son. In his isolation, Vatar finds some comfort in daydreams. He knows the strange girl he sometimes imagines is just that--a dream. She’d better be.

Because, if she’s real things could get even worse for Vatar. The accepted magic of Vatar’s plains tribe wouldn’t enable him to see or communicate with a girl he doesn’t even know--or know where to find. That would be more like the magic passed down in certain, closely-guarded bloodlines among the ruling class of the coastal cities. And that’s bad. Very bad.

Unlike their own, Vatar’s people think the city magic is evil. If the shaman ever found out, it could be the weapon he needs to destroy Vatar. And yet, finding a way to accept the other side of his heritage may be the only way Vatar can ultimately defeat his enemy.

The two kinds of magic have always been totally separate. Until now.

MY TAKE
I read the ebook when it came out and was thrilled to listen to it in audiobook. The narrator, Ian McEuen, did a great job adding accents to people from the various societies. I've read the whole series, and it was great to go back to the beginning again. I'd forgotten how resistant Vatar was to magic at first.

Mansfield's writing is solid, and she tells an imaginative and sometimes gripping story. Interesting cultures. I thought it was fascinating that the nomadic Dardani were actually more culturally sophisticated in some ways than the city people.

I found Vatar to be very likable, and I felt so bad for him. The terrible guilt at not being able to save his friend was bad enough, but to have his friend's father blame Vatar and seek to punish him was terrible.

Vatar's journey includes finding out that the father he's always known was not the one who had fathered him, if that makes sense. Vatar is appalled to find out that the &quot;sperm donor&quot; was a powerful wizard--or that Vatar has half siblings all over the place. The last thing Vatar wants is to have anything to do magic.

It was fun to watch Vatar really grow into a man--often in the school of hard knocks. To be so young and a &quot;divorced&quot; father only added to his challenges.