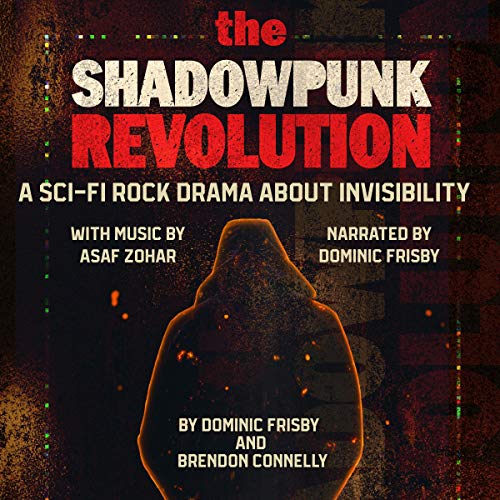 An original sci-fi thriller with a full rock soundtrack.

The year is 2029. A police officer investigating County Lines and the rise of drug use in his rural community discovers dealers have been using some kind of invisibility coat.

His investigations lead him into a new world of techno-anarchists, who developed the coats to defend against the state and corporate invasion of privacy. Their invention is a force for good, but also a force for evil. What side will our hero take?

This gripping bitcoin allegory is brilliantly narrated by Dominic Frisby to an electrifying rock score by Asaf Zohar.

What listeners say about The Shadowpunk Revolution

This is a great short story that any Bitcoin enthusiast can relate to..!
Dominic is a incredible author and narrator..! Sit back, relax and escape into this short thriller..
I seriously hope this gets made into a movie or series..! 🔥🔥

Excellent, but then I would think that ...

... cos I co-wrote and narrated the blighter.

Sock-puppetry aside, I hope you enjoy it.

It was a lot of work - but we think we have created something ... a little different.

I was not expecting this!

Really gripping story, great guitar playing, one of the most exciting audio experiences I've ever had. The narrator is top drawer, I cannot reccomend this enough. I think this is a metaphor for bitcoin. Sci-fi fans will love this. Pity it's not a bit longer, but because the music is so good I've listened to it twice anyway.

Well written story that's you with intriguing suspence. Well narrated too. Cannot wait for the instalment.

This is something a little different, and very interesting. Not the sort of thing I would usually go for - a Rock Drama - but I was pleasantly surprised. A short story, which is essentially an allegory for Bitcoin and privacy in the modern world, told from the unassuming perspective of a backwater village policeman, accompanied by a cyberpunk-y rock soundscape. As with most projects involving Dominic Frisby, I can give it a solid score of 17 million out of 10.

Dominic Frisby is a brilliant narrator and his co-creation with Brendon Connelly is a cracking short story that nudges the listener towards the implications of Invisibility Technology within a feasible, sooner-than-you-might-think-so-stay-awake future. Nods to cryptocurrencies and personal liberty (hallmarks of Mr Frisby's work) are neatly weaved in, plus the soundtrack from Asaf Zohar adds value to the audiobook format with some decent Strat abuse - much needed these days if you ask me. A very good way to spend 47 minutes.

Great story, but personally too much music.

It is a great cyberpunk. I love the idea of invisibility. But for me.. way too much music intro and way to much music during the show.
Otherwise it's a cool story.

Far too brief (is there a part 2??) but hugely enjoyable. Frisby's a joy to listen to and the music (much to my surprise) works.

Dominic needs to work this format a little harder (IMHO) and give us something 3 hrs long with a wee bit more complexity.

I enjoyed it, but it felt like it cut off after the 1st act.. The premise was intriguing, the execution was great for as long as it lasted. but I want more. Do give us a sequel!

Heard Dominic plug this on a podcast. Intrigued, I downloaded and signed up to audible.

I can confidently say it did not disappoint and my only criticism is it had to come to an end.

Dominic Frisby's narration is first class as you would expect.

This is a short story, obviously. Very well written and structured, very compelling and the production values are top notch. A thriller engaged with fundamental issues of liberty, corporate power and personal responsability.

I disliked the lengthy music pieces in between the reading. The music is nice, but too long. The story is great and limits itself to sufficient depth to make the point of this short audiobook.

Very creative writing. i hope this becomes a series of audio books. Loved the open source message for treedom and privacy in our current era of 1984 controlled surveilance! My only complaint is that i wish it was a bit longer.

you see, the possibility of adding music, to books, is one that I am certainly waiting for, this is not a must read book, it's a libertarian view of the world, which I share. yet for the most part, you shouldn't give a fuck about libertarian philosophy, your right to do so, is our philosophy. yet, the book itself is wonderful, a) the story is interesting, and b) the experience, is shocking, I was afraid, for a couple of minutes, of invisible physicists around me . knowing, I had no basis to do so, and this was so much fun, being afraid of what doesn't actually exist, simply because music was added to a book, that made it appeal to my emotion, is something I enjoyed , very much. and I believe you would too. Dominic, you are one great bastard.