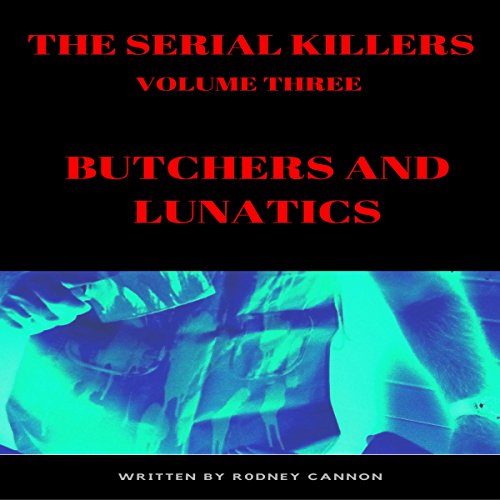 In Volume 3 of my Serial Killers series, The Serial Killers: Butchers and Lunatics, you will be introduced to some of the most vicious and disturbed Serial Killers. In Butchers in Lunatics we are going to explore the crimes and lives of men such as:

Ted Bundy, killer of at least 36 woman and perhaps more than 60. Randy Kraft convicted of 16 counts of murder and rape of young men.Herbert Mullin an almost forgotten serial killer from the 1970′s who committed 13 murders. This lunatic believed that his killings would help to prevent earthquakes. Edmund Kemper a six foot nine mountain of a man who was every bit the monster that his size would indicate. His total number of murders may only be in the single digits, but of all the killers that I have read about or written about this is by far the sickest creature of them all. The evil acts that he perpetrated on members of his own family, innocent strangers, the living and the dead marks him as one of the vilest creatures to ever roam the earth. Reading about his crimes may cost you a part of your humanity. He is the reason that this book is titled Butchers and Lunatics.Robert Berdella, the Kansas City Butcher.

Kidnapping, torture, rape and murder was the stock and trade of this man for over a decade before his capture. The first name in serial killers and even after a hundred and thirty years Jack The Ripper's crimes are not to be overlooked. These were some of the most vicious murders ever and his reign of terror all but paralyzed the largest city on earth for nearly a year. You have heard of him, but do you really know how bloody those murders were?

What listeners say about The Serial Killers

I enjoyed this book. It was a brief overview of different serial killers, with an emphasis on Ted Bundy and Jack the Ripper. It didn’t try to go any deeper than stating what these killers did, which was still really brief.

This is a good book full of interesting information on some of the most notorious serial killers. The narration was okay but a bit robotic at times. I received a review copy at my request and voluntarily reviewed.

Super creepy but really interesting- I enjoyed this audio. Narration was really well done. I highly recommend this one to anyone who has an interest in true crime.

The Serial Killers: Butchers and Lunatics by Rodney Cannon was a pretty good read. This book consists of some of the most heinous and disturbed serial killers.

This book was just a slight overview of a few serial killers and the twisted ways they killed. There was no insight or slightly deeper dive into the killers. I have an interest in this topic and really like to have a little background into the killers and their victims to help me wrap my brain around the &quot;why?&quot; of it all. Unfortunately the reading was not very good. There were a number of mispronunciations and the first chapter, in particular, was read like it was one long run-on sentence.

I really enjoyed this book. Easy and fast listen. It was clear that the author did his research. My only complaint was that it wasn't long enough. I would love to see the author take on one of the serial killers for a whole book.

The narrator was pleasant and professional. That might not sound like a compliment but it is. There are a lot of narrators that don't know what they are doing.

Quick listen but some interesting information.

This was a short book with some information that is well known to most anyone who is familiar with famous cases (such as Ted Bundy) and new information on some not so well known cases also. I felt although this was short, it was well worth listening to. The narration was different than I am used to since it was a female voice instead of the typical male voice used in this type of book. It was a nice change but many times it sounded like she didn't pause at the end of sentences before starting the next sentence. It was a bit confusing at times. I was voluntarily provided this free review copy audiobook by the author, narrator, or publisher

the must book of true crimes

I received this book of my own free will for an honest review.

And being so obsess with horror and criminal things, this book was so cool. It was like a criminal digest I really liked the frame he uses to telling this things since is easy to follow and the narrator I was enchabted by this woman, I don't he need anyone else to narrate his books she is a keeper in that matter.

I liked that he do his homework and tells what need to be told about this people and how it did affect certain aspect maybe of the law or the vision of the world for everyone else. an interesting and well done book about true crime.