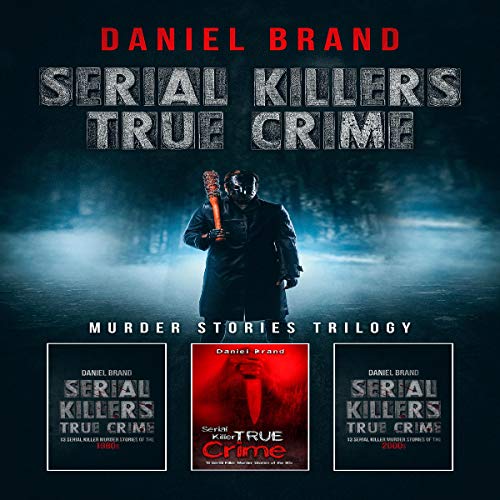 By: Daniel Brand
Narrated by: Karin Allers
Try for £0.00

The 1980s to 2000s was a time of great technological and social change in America, but it was also a time when monsters stalked the highways and byways of the country as well, and, for the first time, the information super highway. If you love Criminal Minds, Unsolved Mysteries, True Crime, and true tales of horror more chilling than anything the imagination can conceive, then Serial Killers True Crime: Murder Stories Trilogy is the book you have been waiting for.

Inside you will find three separate books containing a full graphic account of the exploits of monstrous individuals, such as:

Harvey Miguel Robinson has the dubious honor of being one of the youngest serial killers in American history, being just 18 when he was arrested for the crimes he had committed. Robinson killed two women and a teenager, in addition to trying to kill a child and the woman that would ultimately lead to his capture. Robinson’s murder spree was the inspiration for the movie No One Could Protect Her starring Joanna Kerns as intended victim Denise Sam-Cali.

Charles Edmund Cullen is a former nurse and the most prolific serial killer in the history of the East Coast, if not in all of American. He has confessed to killing more than 40 people during his time as a nurse, and subsequent interviews have indicated that the actual number could be far, far greater as he cannot remember names but can remember specifics of the events. All told, experts believe he may have killed as many as 400 people.

Keith Hunter Jesperson killed at least eight women during the early '90s and earned the moniker the Happy Face Killer from the smiley faces that he always included on his letters to the authorities as well as to the media. He typically targeted prostitutes, as well as transients with no apparent rhyme or reason for the killings. He primarily killed his victims via strangulation, in much the same way he killed animals as a child. There was a movie made about his killing spree called Happy Face Killer, which premiered in 2014.

David Parker Ray, more commonly known as the Toy-Box Killer, is believed to have kidnapped, tortured, and murdered more than 60 people near the New Mexico, Arizona border over several decades. Ray would keep his victims in a trailer known as his toy-box, which was exceedingly well-equipped for all manner of sexual torture and murder. He was convicted of torture and kidnapping in 2001 and died incarcerated the very next year before he had a chance to confess to the full nature of his crimes.

Inside you will learn all about the horrible life and times of:

A Little Clumsy in Places but still interesting

There was a few moments where the narrator seemed to repeat himself, but I'm unsure as to whether it was written in such a way for the book or if it was a mistake on the narrator's behalf.

Great if you love terrible grammar, mangled figures of speech, and clumsy narration

This was literally painful to listen to. It was not merely awful writing, with a narrator who would stumble over a passage, then repeat it, but it gets facts wrong in some cases as well.

Clearly no one, not even the author, even read these once prior to publication. Two sentences in a row state the exact same thing, with slightly different phrasing, in more than one place.

In this book, killers “loom” a neighborhood, crimes are committed “at” or “on” a person (and not against them), and even misuse of basic legal terminology that every true crime reader/listener knows well.

Utterly ghastly, and a waste of time.

If you like listening to boring statistic in a monotone voice this book is for you. It wasn’t time for me to fall asleep yet so I had to turn it off.

This collection is great!

This collection is great! I love that his stories are right to the point & no dragging on, even though with his writing I could read them forever! Even in the most published stories I still learn something new in his books!

Details that are often forgotten were written down and listen out for all to hear and it did truly give an insight into these murderous people. The stories aren't long, but you do get a good overview of them.

I could tell that each story had been well researched and I highly recommend. This book was given by the author/narrator in return for an honest and unbiased review.

I enjoyed listening to it.

The narrator does fine with the subject matter he has been given. I don't think he has been narrating long, but he has a nice voice that is easy to listen to. Overall good book. I enjoyed listening to it.

I've become fascinated with crime stories and enjoyed this collection. The narration was good. The author gives plenty of information. I look forward to reading more books by this author.

This collection of short stories is a refreshing break from other true-crime podcasts that can take months to finish. I can listen to an episode on the way to work without leaving with an unfinished thought. Highly recommend!

This book is excellent and the narrator was awesome! I would recommend this book to anyone.

Overall the collection was well put together and

Overall the collection was well put together and informative. Do not expect drama, suspense or story. This is just cold hard case facts.