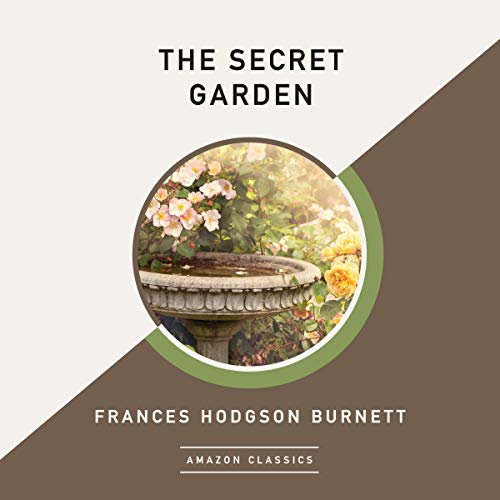 By: Frances Hodgson Burnett
Narrated by: Susan Duerden
Try for £0.00

The orphaned Mary Lennox is sullen, ill tempered, and unloved when she's sent to live with her uncle, Archibald Craven. A man consumed by grief over the death of his wife, Archibald has allowed his sprawling estate on the moors to fall into grim disrepair. It's when Mary begins tending to her late aunt's mysterious garden - locked up and neglected for years - that she discovers its life-changing secrets and a flowering rejuvenation of the human spirit.

Out of this dark, closed-off world and a child's innate curiosity about life and death comes one of the most transformative coming-of-age novels ever written.

What listeners say about The Secret Garden (AmazonClassics Edition)

This is a fantastic heartwarming story that is as suitable for adults as it is for children.

Lots of lessons for all of us to learn and reflect on.

You can tell it is an old book as it is not politically correct in parts,But neither am I so that does not bother me at all.

This is a brilliant classic wonderfully narrated by Susan Duerden, which is definitely worth a credit.

OM Gosh, I devoured this. Simply a beautiful story; a treasure and towards the top of my adored classics reads now.

Gardening is good for the soul; I’m a firm believer of that....so it would seem was Francis Hodgson Burnett.

Not just for children.

This Amazon audible version was great.

I've seen a TV adaptation of this story and enjoyed it so I thought the book would be as good. The story could have been told in 14 chapters instead if 27. It droned on and on and I struggled to finish it. The narration was ok but being Yorkshire botn snd bred, 27 chapters of inaccurate Yorkshire dialect drove me to dospair.

couldn't finish, so boring, spoiled child, lonely uncle who lost his wife... I sure hope there is a happy ending.

this is simply brilliant

I absolutely love the book, the story, the performance and the accents were spot on!

A delightful story for young and old, all characters are portrayed with great empathy by the author. A must read at any age.

Whispersync does not work

I bought this audio book for my dyslexic son to read&listen with Whispersync. The Whispersync doesn't work for this book though. I'm rather disappointed... There is nothing wrong with the recording as far as I know (the first chapter sounds just fine), but it just refuses to connect to the kindle book. Sure he could listen (only) to it, but he really needs to see and hear at the same time - that's why Whispersync is such a great thing for him... The Kindle book says I need to buy the Audible book, but since I can post this review I guess I have obviously already bought it?! (Audible bookstore also thinks I have already bought it, as does my own memory... )
There seems to be something wrong with the Whispersync technology for this specific book! Please, Amazon Classics Edition, fix it!

Magic is in your head

A wonderful story reminding me that how you think & feel (about yourself, others & life as a whole) can have incredible impact on how you experience your life. The real “magic” is in fresh air, exercise & maintaining a positive mental state-awareness of the times you inadvertently use the “wrong magic” & substituting “happy thoughts” for the unpleasant ones. Most importantly never letting others tell you who you are or what your life will be like. I found this story sweet & inspirational, a wonderful reminder of things I sometimes forget.

The book is suitable for the young. The narration was done to perfection with the reading speed and portrayal of the characters.

I have always loved this title. Wonderful to listen too. I absolutely recommend this book!

quite a good story and strangely enough this book was hard to stop reading.

A classic book with excellent narration

I was a fan of the movie “The Secret Garden” as a child in the 90’s, but had never read the book. I decided to read the book this summer and I’m so glad I did! This is a timeless story that can just as easily be enjoyed in 2020 as it was in the late 1800’s. The writing style is accessible and very enjoyable. I especially loved the narrator. She kept a good pace without being too slow nor too fast, and her voice for the different characters was pleasant and soothing. I found myself finding excuses to stay out longer on my daily walks just so I could get another chapter in. I highly recommend!

Do like every sentence to sound like a question? Plus her breathy airy tone added to it to make a special kind of unbearable. I had to use a different version. Not for me. I couldn't even follow the story it was so distracting and emotionless.

Excellent listen! Granted, I was disposed to enjoy it as - like most of the audiobooks I buy - this is a favorite, in my 'keepers' library. But that doesn't mean the spoken version will live up to the paper book.
But I've been lucky so far, and most of those I've purchased will remain in my 'listening' 'shelf'. This one is no exception, and I will enjoy it over and over. Thanks!

It pulled my senses to wonder imagination. I loved it!!! It was more interesting to read than to watch.

I love this story. the narrator does a wonderful job with character voices and broad Yorkshire, but most of the book is read in a sing-song , as if it were not prose but poetry.
I found it extremely distracting and annoying. I plan to return this particular version in trade for another